Sarah Silverman stands against an overexposed white background, addressing the camera (and her boyfriend of five years, talk show host Jimmy Kimmel). "Hey Jimmy," she says, "It's me." It's the quintessential Silverman line delivery: faux-awkward, sweet and self-consciously cute, but so sharp and precisely targeted that it almost hurts a little. Of course it's her. But where is she?

Well, she's in some netherworld hotel, neither here nor there -- been on the road so long, you know, she's not even sure what city she's in, to be honest -- and she has something on her mind, something she's been meaning to tell Jimmy, that she's been carrying around with her like excess baggage. Dressed in a snug, lipstick-magenta/pink shirt, she stands out, flush and ripe, from the soft pale light that envelops her. She strolls to the right, from one lush, clean-green tropical split-leaf philodendron to another, a sexy and innocent Eve in the unspoiled Garden of Eden (or a hotel lobby facsimile thereof). Her delicate fingers stroke a wistful figure on her guitar, again and again, as she works up the backbone to expose her true feelings. (Insert what we imagine to be a typical candid photo of the happy couple: Silverman draped adoringly over the shoulders of a drunken, blurry-eyed Kimmel.) 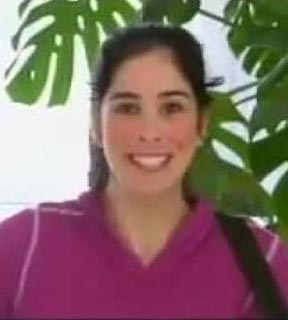 In the primeval Garden: The moment of first release, the revelation of Knowledge in the Biblical sense.

The segue, if you call it that, is abrupt, jarring. Cut to a close-up of her guitar ("Here it goes...") and a crunching electric riff begins. Medium shot of Silverman as she sings the first line (and the title), with an expression of "Omygod!" on her face, like a teenage girl at a slumber party confessing a crush on the cutest boy in school: "I'm f***ing Matt Damon!" This is inappropriate. Not only is she singing this to her boyfriend, she's doing it on his fifth anniversary show on network TV. She has not only swallowed the forbidden fruit, she has swallowed the serpent: Matt Damon!

Cut to... Damon himself, in tight black t-shirt (like snakeskin!), arms stretched cockily over the back of a white couch as if in post-coital repose. He's been seated just outside the frame, all the time, and he gives the camera a knowing, testosterone-fueled smirk: "She's f***ing Matt Damon!" He's got the cat-with-the-canary grin. The knowledge that he's avenging Kimmel's repeated, disrespectful scheduling slights is written all over his face. He is no longer the butt of the joke, he gets to deliver the punchline. Repeat. Silverman shoots him a naughty-girl look, then shifts her expression to one of rue and sorrow for: "I'm not imagining it's you." Next, in an instant, she grits her teeth and turns into Joan Jett. On cue, Damon launches into a Henry Rollins punk growl and threatens to lunge at the camera, seizing it the way we imagine him grabbing Silverman's waist before they do the nasty title phrase. It begins in a two-shot, with Silverman cheerily bending down into the frame:

On the bed, on the floor On a towel by the door In the tub, in the car Up against the mini-bar

One can't help but recall Theodor Geisel's seminal "Green Eggs and Ham," in which Sam I Am pesters an increasingly exasperated, unnamed character who does not like the titular dish. In this case, however, Damon and Silverman are turning the tables: The song is an expression of rapacious appetite, and the way Damon delivers it -- with a mad glint in his eyes and a leer on his lips -- is a volatile mixture of lust and vengeful glee. He
Advertisement
likes them apples....

"For quite some time I've wanted to do a dissertation on what I consider to be the genius of Sarah Silverman." -- Jim Emerson, RogerEbert.com, November 10, 2005

But, seriously, she references Randy Newman's "I Love L.A." near the end, but I'm going crazy trying to remember where the title riff comes from. Seems to me it might have originally been only five syllables ("Da-da-da-da-da!"), and that it's from a punk-ish or New-Wavey band from the late 1970s or early 1980s -- like the Sex Pistols or the Clash or Elvis Costello or Squeeze, perhaps. (That's just a hunch -- as is my apparent assumption that they were Brits.) Can you hear it in your head? Something like: "Mus-sels and SA-lads!"