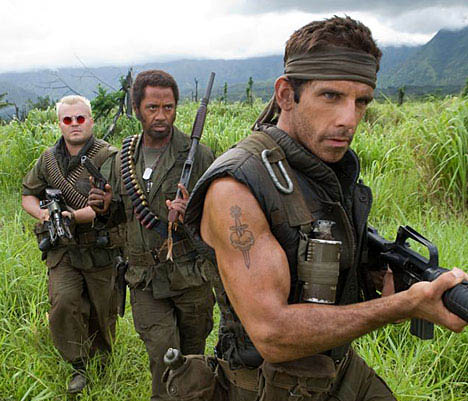 Who's that black guy in between the blonde Jack Black and the tattooed Ben Stiller? It's Robert Downey, Jr.

What will the Jim Crow "one-droppers" who didn't think Angelina Jolie was "African enough" to play Dutch-Jewish / Cuban-black-Hispanic-Chinese Mariane Pearl make of this? The actor in the center of the accompanying image is Robert Downey Jr., a white German-Scottish / Irish-Jewish actor. He's playing a white actor who is cast in a part originally written for a black actor, so he decides to play it black. The movie, "Tropic Thunder," is a satire of Hollywood actors making an epic war movie. It's directed by Stiller, co-written by Etan Cohen ("Idiocracy," "My Wife is Retarded" -- note that the "h" is not in the first name but the last; he's no relation to Joel) and Justin Theroux (who played a director in "Mulholland Drive" and an actor in "Inland Empire"). Nick Nolte, Jay Baruchel and Steve Coogan also star -- along with some big names in cameo appearances.

As Downey told Entertainment Weekly, "If it's done right, it could be the type of role you called Peter Sellers to do 35 years ago. If you don't do it right, we're going to hell." [...]

''At the end of the day, it's always about how well you commit to the character,'' he says. ''I dove in with both feet. If I didn't feel it was morally sound, or that it would be easily misinterpreted that I'm just C. Thomas Howell in ["Soul Man"], I would've stayed home.''

Trivia: Downey's father, the writer-director of "Putney Swope," the satirical 1969 comedy about a black advertising executive, looped his own voice for the black actor in the leading role.