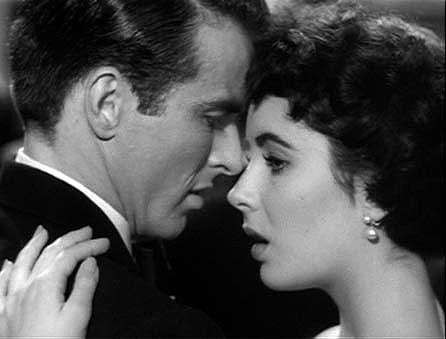 In Steve Erickson's novel "Zeroville," a young man with a tattoo of Montgomery Clift and Elizabeth Taylor in "A Place in the Sun" imprinted on his shaved head arrives in Hollywood in the summer of 1969. Raised a strict Calvinist (not coincidentally like Paul Schrader, writer of "Taxi Driver"), his hunger for, and obsession with, movies has a religious fervor to it.

He develops protective feelings for a young girl in the Hollywood fast-lane (echoes of Travis Bickle and Iris). He takes her to the Fine Arts for a revival of "A Place in the Sun." The audience laughs at some of the "dated" moments, and the girl (Isadora, who goes by Zazi -- as in "... dans le métro" by Louis Malle, 1960?) thinks it's silly. He is devastated. But one night she watches the movie, alone, on TV. It is a revelation to her.

"The thing is, that movie last night is a completely different movie when you watch it by yourself. Why is that? Movies are supposed to be watched with other people, aren't they? Isn't that part of the point of movies -- you know, one of those social ritual things, with everyone watching? It never occurred to me a movie might be that different when you don't watch it with anyone else. And that movie... [...]

"That's a movie you see alone and it gets into you. I've been up all night. I said it was silly when we saw it together, but that was way off. There's nothing silly about that movie. Twisted and deeply f---ked up, yeah... but silly, no. Too twisted not to be private, you know?

"I mean, five hundred or a thousand people or however many it is in a theater -- what are they going to do with a movie like that? There's too much common sense floating around the room, and what you have to do with a movie like that is give up your common sense, which is easier to do when it's just you alone. It just seems... radical, any movie that, like demands your privacy, because it's, you know... a movie like that makes common sense completely beside the point, and you're one on one with it, in the living room by yourself rather than the theater with all those people, and watching it is like being naked and you can't be naked like that with strangers, you can't even stand the idea of it, and you know that after you're finished with it, much more with a movie like that than any stupid horror flick, some deep dark shit is going to be waiting at the bottom of the stairs... so I just couldn't sleep. That movie's like a ghost. Watch it and you become the thing or person that it haunts. Last night, the movie became mine and no one else's."

Yes. Some movies are too personal to be shared with a crowd. You can't let down your guard and give yourself over to them if you're surrounded by a mob of strangers. Sure, at home you may be tempted to take (remote) control of the movie. Or you may become distracted by light or sound (turn off the lights, switch off the phone).

And in the theater you may be distracted by people eating, talking, texting, heckling, getting up to go to the restroom -- or even by the damn exit signs (some are so bright), or the damn twinkly aisle lighting that stays on for the whole movie and leads you to the nearest emergency exit (keep in mind it may be behind you), or the rumbling and hissing of the heating/air conditioning, or the traffic outside or underneath you (people who've survived Southern California earthquakes may wish to avoid the subway-Sensurround of the Angelika multiplex in NYC), or the soundtrack from the movie next door, or the general stinkiness of the people, seats, and floors in your vicinity, and the various disinfectant and deodorizing treatments that have or have not been applied to them...

All those things take their toll in some way. And Zazi is right. For all the talk about the importance of seeing movies in a theater, with an audience ("The way they were meant to be seen!" as the marketeers like to put it), some movies work better -- are deeper, richer, stronger -- in private. It's a scientific fact (he said, more or less quoting "Gregory's Girl" again) that in a familiar environment, our brains don't bother to process much of what's around us. We already know it; we don't need to take it all in again, to be constantly aware (even on a subconscious level) of the surroundings, checking for threats or intruders (or violations of our personal space by strangers in close proximity). Perhaps that leaves us more susceptible in some senses, allowing us the freedom to enter into a movie's world, or to allow it to more deeply penetrate our (un-)consciousness. I don't know. It just feels that way to me sometimes.

Even when going to see movies in a theater, I prefer to see them by myself -- to go to the "old people's matinees," as a friend puts it, where the house is more likely to be sparsely populated, and to not have to think about what the friend next to me is making of it. If you've ever had the experience of suddenly feeling like you're seeing the movie through the eyes of a companion, you know how distracting and dispiriting that can be. (Just as bad: Sitting in a crowd that roars its approval for a movie while you sit seething in silence: "Look Who's Talking," "Steel Magnolias," "Natural Born Killers"...)

I'm not sure I ever want to see, say, "The Night of the Hunter" with an audience again. I've seen it in a crowd containing some of those people who feel they have to audibly express that they find it silly, that it's not "realistic," or that they simply don't "get it." That was a painful experience. And as a campus films series programmer, a film festival programmer, and a rep house habitué, I've had more of of these disastrous (occasionally soul-shattering) experiences than I can count. (I feel the hysterical anguish of Carrie's mom: "They're all gonna laugh at you!") I don't even want to see "Taxi Driver" with an audience, because it's now become too familiar, too much a part of the cultural landscape, for some people to see it as anything more than an assembly of catch-phrases and AFI tribute clips.

So, fine. As far as I'm concerned, all those movies -- the ones I feel so protective about, whether they need it or not -- are mine now. They live in my head, as they always have since they wormed their way in there, and now I can see them on my private screen (video and memory/imagination), where no one else can touch them -- bully them, mock them, reject them. (Not that any audience could ever really touch them, but it's like having people in the most private recesses of your consciousness making fun of your dreams as you're dreaming them. It is, of course, me who wants to protect myself from exposure and ridicule, even while hiding in the darkness.)

For most of cinema's history, few people (except for those in the industry, or collectors of 16 mm or 35 mm prints) could see movies anywhere but in a movie theater. That is no longer the case. I believe home video is the most profound, "paradigm-shifting" development in film history, since the coming of sound. Steve Erickson explores this, and the scene in question from "Zeroville," in an interview with Anthony Miller over at Susan Henderson's Litpark.

... [For] better or worse movies, like books, have become artifacts as well as experiences, and that replaces the social ritual of seeing movies with other people, except in the case of spectacles because spectacles call for crowds and always have and probably always will.

There’s one scene in the novel where Zazi sees "A Place in the Sun" on television after having seen it in a theater with an audience that laughed at it, and she tries to explain to Vikar how seeing the movie by herself was very different from being part of a collective response, in which suspending not just disbelief but rationality and giving oneself over to the dreaminess of the movie was impossible. Though Zazi never uses the term “Cinema of Hysteria,” that’s what she’s talking about—these are movies that work best when seen alone.

I’m convinced that one of the reasons "Vertigo" rose in the pantheon of great films since its original failure when it was released in the late Fifties is that a whole generation of budding young film lovers saw it on TV around 1962 as I did, at the age of twelve, alone in my living room when my parents were down the street at a party, and everything about it blew me away and unsettled me—the surrealism of it, the eroticism, which I understood only as well as twelve-year-olds in my day understood eroticism. And as with Zazi and "A Place in the Sun," I’ve never seen Vertigo “work” with an audience in a theater, and I’ve seen it with an audience at least four times. Kubrick’s "Eyes Wide Shut" is the most recent example I can think of—a movie that seems absurd in the collective dark, shared with other people, but watched alone on DVD has the force of a private dream.

So as we near that Year Zero that you’re speaking of, and as movie-watching becomes more a solitary experience, I can’t help believing it will have some impact on the movies themselves. That social ritual will be lost and it will be a shame, but some more private ritual—maybe like reading—will replace it,

Movie-watching like reading? That's exactly the way I have come to think of it. And I find I get deeper into movies once they're out on DVD and I can stop and go over moments and sequences, see how they work -- just as if I were reading a book and wanted to re-read a page or a paragraph to let it resonate or study how it's put together. I don't always feel that I need to watch a movie in a single sitting, either. Is that bad of me? Maybe. The movie was not necessarily "made" to be experienced that way. Then again, if it's a recent film, maybe it was made with DVD in mind -- not unlike the way that, as far back as "The Abyss" and "Terminator 2: Judgment Day," James Cameron composed his movies in widescreen and 1.33:1 (more commonly referred to as 4:3 these days) because he knew even then that, in the pre-DVD days before letterboxing or 16:9 TVs were commonplace, most people would see his films on a conventional TV.

Of course, I enjoy seeing films as an audience member, or an individual viewer. I also enjoy looking at them the way an editor might -- or a director, or a composer. In the first half of the history of movies (so far), that would have been impossible. Now it's not.

Do you have movies you think are too personal to be seen with an audience? Let's talk about what they are, and why you're reluctant to share them...