The Night of the Hunter

Charles Laughton's "The Night of the Hunter” (1955) is one of the greatest of all American films, but has never received the attention it deserves because of its lack of the proper trappings. Many “great movies” are by great directors, but Laughton directed only this one film, which was a critical and commercial failure long overshadowed by his acting career. Many great movies use actors who come draped in respectability and prestige, but Robert Mitchum has always been a raffish outsider. And many great movies are realistic, but “Night of the Hunter” is an expressionistic oddity, telling its chilling story through visual fantasy. People don't know how to categorize it, so they leave it off their lists.

Yet what a compelling, frightening and beautiful film it is! And how well it has survived its period. Many films from the mid-1950s, even the good ones, seem somewhat dated now, but by setting his story in an invented movie world outside conventional realism, Laughton gave it a timelessness. Yes, the movie takes place in a small town on the banks of a river. But the town looks as artificial as a Christmas card scene, the family's house with its strange angles inside and out looks too small to live in, and the river becomes a set so obviously artificial it could have been built for a completely stylized studio film like "Kwaidan" (1964).

Everybody knows the Mitchum character, the sinister “Reverend” Harry Powell. Even those who haven't seen the movie have heard about the knuckles of his two hands, and how one has the letters H-A-T-E tattooed on them, and the other the letters L-O-V-E. Bruce Springsteen drew on those images in his song "Cautious Man”:

Many movie lovers know by heart the Reverend's famous explanation to the wide-eyed boy ("Ah, little lad, you're staring at my fingers. Would you like me to tell you the little story of right-hand/left-hand?”) And the scene where the Reverend stands at the top of the stairs and calls down to the boy and his sister has become the model for hundred other horror scenes.

But does this familiarity give "The Night of the Hunter” the recognition it deserves? I don't think so because those famous trademarks distract from its real accomplishment. It is one of the most frightening of movies, with one of the most unforgettable of villains, and on both of those scores it holds up as well after four decades as I expect "The Silence of the Lambs" to do many years from now.

The story, somewhat rearranged: In a prison cell, Harry Powell discovers the secret of a condemned man (Peter Graves), who has hidden $10,000somewhere around his house. After being released from prison, Powell seeks out the man's widow, Willa Harper (Shelley Winters), and two children, John (Billy Chapin) and the owl-faced Pearl (Sally Jane Bruce). They know where the money is, but don't trust the “preacher.” But their mother buys his con game and marries him, leading to a tortured wedding night inside a high-gabled bedroom that looks a cross between a chapel and a crypt.

Soon Willa Harper is dead, seen in an incredible shot at the wheel of a car at the bottom of the river, her hair drifting with the seaweed. And soon the children are fleeing down the dream-river in a small boat, while the Preacher follows them implacably on the shore; this beautifully stylized sequence uses the logic of nightmares, in which no matter how fast one runs, the slow step of the pursuer keeps the pace. The children are finally taken in by a Bible-fearing old lady (Lillian Gish), who would seem to be helpless to defend them against the single-minded murderer, but is as unyielding as her faith.

The shot of Winters at the bottom of the river is one of several remarkable images in the movie, which was photographed in black and white by Stanley Cortez, who shot Welles' "The Magnificent Ambersons," and once observed he was "always chosen to shoot weird things.” He shot few weirder than here, where one frightening composition shows a street lamp casting Mitchum's terrifying shadow on the walls of the children's bedroom. The basement sequence combines terror and humor, as when the Preacher tries to chase the children up the stairs, only to trip, fall, recover, lunge and catch his fingers in the door. And the masterful nighttime river sequence uses giant foregrounds of natural details, like frogs and spider webs, to underline a kind of biblical progression as the children drift to eventual safety.

The screenplay, based on a novel by Davis Grubb, is credited to James Agee, one of the icons of American film writing and criticism, then in the final throes of alcoholism. Laughton's widow, Elsa Lanchester, is adamant in her autobiography: “Charles finally had very little respect for Agee. And he hated the script, but he was inspired by his hatred.” She quotes the film’s producer, Paul Gregory: “. . . the script that was produced on the screen is no more James Agee's . . . than I'm Marlene Dietrich.”

Who wrote the final draft? Perhaps Laughton had a hand. Lanchester and Laughton both remembered that Mitchum was invaluable as a help in working with the two children, whom Laughton could not stand. But the final film is all Laughton's, especially the dreamy, Bible-evoking final sequence, with Lillian Gish presiding over events like an avenging elderly angel.

Robert Mitchum is one of the great icons of the second half-century of cinema. Despite his sometimes scandalous off-screen reputation, despite his genial willingness to sign on to half-baked projects, he made a group of films that led David Thomson, in his Biographical Dictionary of Film, to ask, “How can I offer this hunk as one of the best actors in the movies?” And answer: “Since the war, no American actor has made more first-class films, in so many different moods.” “The Night of the Hunter,” he observes, represents “the only time in his career that Mitchum acted outside himself,” by which he means there is little of the Mitchum persona in the Preacher.

Mitchum is uncannily right for the role, with his long face, his gravel voice, and the silky tones of a snake-oil salesman. And Shelly Winters, all jitters and repressed sexual hysteria, is somehow convincing as she falls so prematurely into, and out of, his arms. The supporting actors are like a chattering gallery of Norman Rockwell archetypes, their lives centered on bake sales, soda fountains and gossip. The children, especially the little girl, look more odd than lovable, which helps the film move away from realism and into stylized nightmare. And Lillian Gish and Stanley Cortez quite deliberately, I think, composed that great shot of her which looks like nothing so much as Whistler's mother holding a shotgun.

Charles Laughton showed here that he had an original eye, and a taste for material that stretched the conventions of the movies. It is risky to combine horror and humor, and foolhardy to approach them through expressionism. For his first film, Laughton made a film like no other before or since, and with such confidence it seemed to draw on a lifetime of work. Critics were baffled by it, the public rejected it, and the studio had a much more expensive Mitchum picture (“Not as a Stranger”) it wanted to promote instead. But nobody who has seen "The Night of the Hunter” has forgotten it, or Mitchum's voice coiling down those basement stairs: "Chillll . . . dren?” 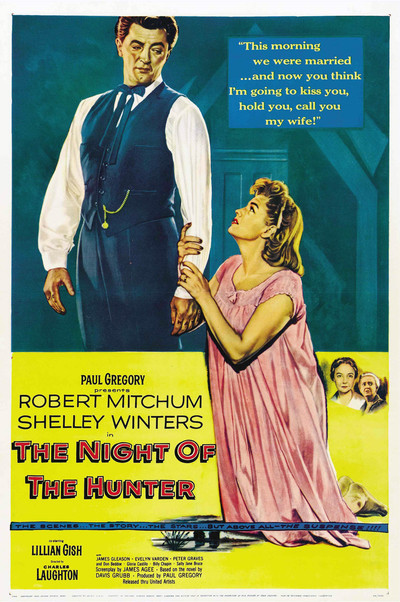