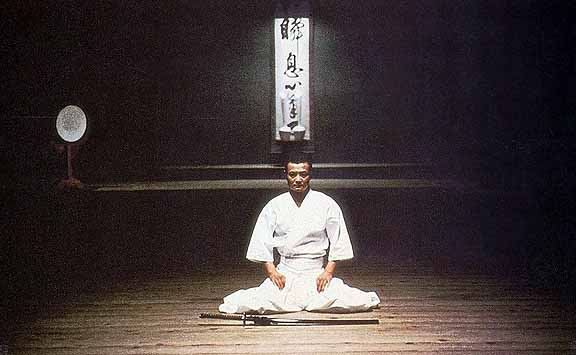 From "Mishima: A Life in Four Chapters."

The first thing Paul Schrader wanted to talk about after the Ebertfest screening of his ambitious 1985 "Mishima: A Life in Four Chapters" was his youthful fascination with the primitive rite of "suicidal blood sacrifice." That's what he said his script for "Taxi Driver" was rooted in -- and, no wonder, since he had been raised a strict Calvinist (is that redundant?) and, as he put it, "Christianity is a blood cult" that glorifies sacrificial suicide. In "Mishima" it's the act of seppuku; in "Raging Bull" it's boxing; in "The Last Temptation of Christ" it's crucifixion... To writer-director Schrader, they're all manifestations of the same bloody thing. 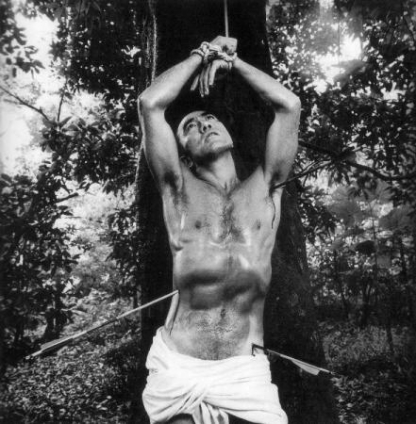 Initially, he said, he doing doing a film about "another semi-literate American" and martyr figure, singer Hank Williams, but decided he was too much like Travis Bickle. When faced with all the music clearance problems, and the prospect of writing about another white American from the underclass, he chose instead to "go clear to the other end of the bookshelf" -- "to the Japanese, the artist, the homosexual." Inspiration, he said, is just another word for problem-solving, and "Mishima" presented him with the opportunity to undermine the Western illusion of life as a series of problems, and the existence of definitive solutions that view implies. There are no solutions, emphasized the author of the landmark "Transcendental Style in Film: Ozu, Bresson, Dreyer." Life presents conundrums to explore, he said, but we should not think of it as something that can ever be fully understood.

Schrader saw Mishima as an outsider, an individualist in a "consensus culture," a post-war military reject who embraced the glory of Imperial Japan, and an artist who relished his role as pop star. Eventually, he came to believe that his image as a public figure eclipsed his works, that his life was his art. His meticulously planned ritual suicide was envisioned as the climax to his greatest fiction -- himself. 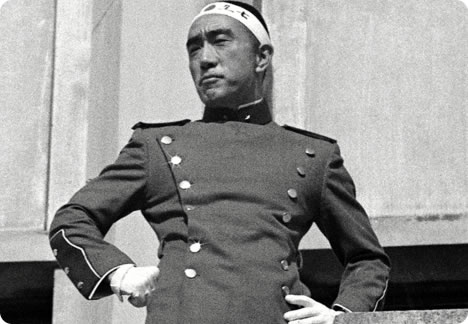 The real Mishima, giving a speech shortly before his suicide.

Appearing on stage with his costume/production designer Eiko Ishioka, a film novice at the time of "Mishima," Schrader recalled the difficulties of finding an approach to Mishima's life and work, which he broke down into four sections and various interwoven styles: black and white for episodes from Mishima's past, including his childhood; pseudo-cinema verite for the last day of his life; and theatrically stylized, exaggeratedly artificial sets for excerpts from three of Mishima's novels: "The Temple of the Golden Pavilion" (1956), "Kyoko's House" (1959) and "Runaway Horses" (1968).

Schrader had brought his personal 35 mm print of "Mishima" with him, and although it looked as dazzling as I'd remembered on the enormous Virginia Theatre screen at Ebertfest (projected to perfection, as always, by James Bond), he said the upcoming remastered Criterion DVD actually sounded better (in a Dolby 5.1 remix). He also added one scene and did a sky replacement (in the mostly day-for-night seaside seppuku sequence from "Runaway Horses" in part 3, to make it look more artificial).