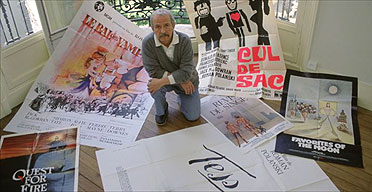 Collaborator with Roman Polanski on "Repulsion," "Cul-de-Sac," "The Fearless Vampire Killers," "The Tenant," "Tess," "Frantic," "Bitter Moon" and others. From The Guardian:

"Cul-de-Sac" (1966) had echoes of "Waiting for Godot," but was more directly influenced by Harold Pinter, not only in the casting of Donald Pleasence, who had triumphed in Pinter's "The Caretaker" a few years previously, but also in the portrayal of sexual humiliation and in the relationship of the two gangsters. However, the depiction of a married couple's sexual tensions that erupt into violence when an outsider intrudes on their world was a favourite theme developed in the Polanski-Brach screenplay.... [...]

Throughout their partnership, Brach did most of the writing. "We talk and then he writes it," Polanski explained. "Then he comes back into the room and we change it together."

Besides his work with Polanski, Brach co-wrote screenplays for several of the most notable films of the 1980s, mostly for non-French directors: "Identification of a Woman" (Michelangelo Antonioni, 1982), "Favourites of the Moon" (Otar Iosseliani, 1984) and "Maria's Lovers" (1984) and "Shy People" (1987), both by Andrei Konchalovsky. Nevertheless, his most acclaimed screenplays were for Frenchmen: Berri, the two-part Marcel Pagnol adaptation, "Jean de Florette" and "Manon of the Spring" (1986); and Jean-Jacques Annaud, "The Name of the Rose" (1986), "The Bear" (1988), "The Lover" (1992) and "Minor," currently being shot in Spain.

Brach was agoraphobic, and for almost the last 10 years he hardly ever left the Paris apartment where he lived alone, rarely receiving visitors, except for the occasional director.