The movie is based on a novel by Thomas Hardy, but Polanski never permits his film to become a Classics Illustrated; this isn't a devout rendering of a literary masterpiece, but a film that lives and breathes and has a quick sympathy for its heroine. Nastassja Kinski is just right for the title role. She has the youth, the freshness, and the naiveté of a Tess, and none of the practiced mannerisms of an actress engaged to "interpret" the role. That's good because Tess is a character who should stick out like a sore thumb in many scenes, and Kinski's occasional shy awkwardness is just right for the story of a girl who attempts to move up in social class on sheer bravado.

The story involves a young girl who will be the victim, the prey, and sometimes the lover of many men, without ever quite understanding what it is that those men want of her. The first man in her life is her father, a drunken farmer named John Durbeyfield, who discovers from the local parson that he is related to the noble local family of d'Urbervilles. The farmer and his wife immediately send their beautiful daughter, Tess, off to confront the d'Urbervilles and perhaps win a position in their household.

Tess is almost immediately seduced by a rakish cousin. She becomes pregnant, and her child dies soon after it is born. She never tells the cousin. But later, after she falls in love with the son of a local minister and marries him, she confesses her past. This is too much for her new husband to bear; he "married down" because he was attracted to Tess's humble origins. But he is not prepared to accept the reality of her past. He leaves on a bizarre mission to South America. Tess, meanwhile, descends to rough manual labor for a few pennies an hour. She is eventually reunited with her cousin (who is not a complete bastard, and complains that he should have been informed of her pregnancy). She becomes his lover. Then the wayward husband returns, and the physical and psychic contest for Tess ends in tragedy.

As a plot, these events would be right at home in any soap opera. But what happens in Polanski's "Tess" is less important than how Tess feels about it, how we feel about it, and how successfully Polanski is able to locate those events in a specific place and time. His movie is set in England, but was actually photographed in France. It is a beautifully visualized period piece that surrounds Tess with the attitudes of her time -- attitudes that explain how restricted her behavior must be, and how society views her genuine human emotions as inappropriate. This is a wonderful film; the kind of exploration of doomed young sexuality that, like "Elvira Madigan," makes us agree that the lovers should never grow old. 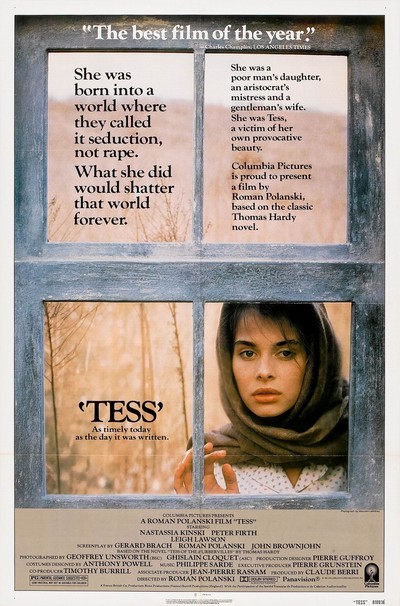