The history of art is filled with late pleasures that coincidentally seem to comment on the death of the artist who made it. But once in a while you encounter a piece that seems like a premeditated farewell—a conscious summing-up of the life and work—whether or not it was intended that way. "Varda by Agnès," a combination autobiography and career survey overseen by the filmmaker, is that kind of movie. It also happens to be a mostly useful primer for Varda's films, which might seem intimidating for any number of reasons until you see them and realize how empathetic and accessible they are.

Agnès Varda, who died earlier this year at 90, was described as the mother (and later, grandmother) of the French New Wave, and remained among the most significant and beloved of directors throughout her life. This film was conceived as a two-part TV documentary. The format is simple: Agnès Varda sits in a chair at the front of a movie theater, screens clips from her films, and talks about them, and sometimes with former collaborators. The effect is a bit like being able to audit a college course while an accomplished yet approachable and unpretentious professor gives lessons in how content and form are intertwined. Varda uses examples from her own movies—which might be used in anyone's classes, not just Varda's, because they're important—and in the process, gives us insight into her working methods, as well as her life, which gets explored tangentially through the clips and the stories she tells about working on each project.

Fans of Varda will appreciate the nods to signature works from her filmography and moments from her life. Her explanations of why she did things in a certain way are illuminating. She talks about the succession of one-minute tracking shots that comprise “Vagabond," the strict use of unbroken linear "real" time in "Cléo from 5 to 7" to explore experience in a way that movies typically don't, and the controversial portrayal of happiness and fidelity in "Le Bonheur" ("Happiness"). The latter includes a number of fades to color (red, blue, yellow, etc) rather than to black, a technique that Martin Scorsese borrowed in his 1992 film version of "The Age of Innocence." The heart-shaped potato from her documentary "The Gleaners and I" (which ties into her 2003 Venice Biennial exhibition "Patatutopia,” which she promoted by wearing a potato costume) also makes an appearance. So do various art projects and multimedia explorations.

It would be a mistake to treat "Varda by Agnès" as an all-encompassing survey. It's probably seen as a companion to an exploration of her filmography, or maybe a chaser after having seen a couple of titles, or reading up on her. She doesn't progress through her story in a strictly linear way; there are lots of digressions, and sometimes she spends what feels like an inordinate amount of time on something that doesn't register as strongly as subjects in other parts of the film. And the intermittent failure to identify clips when they appear seems to presume a familiarity that's otherwise at odds with the spirit of the project. Best to think of this as the cinematic version of a candy sampler box.

Woven throughout is a thoughtful consideration of Varda's documentary impulse. Without ever abandoning the need or desire for thoughtful framing and cutting, Varda's dramatic features made a point of letting real-world situations and relationships dictate moments, characterization points, even whole stories; and her documentary films often have a very strong, often autobiographical or subjective storytelling spine that makes them seem of a piece with movies that were marked as "fiction." It's a delight to hear her talk about this tendency, as well as her philosophy of filmmaking and existence, which often seemed to put her at odds with the more grandiose aspirations of her (mostly male) contemporaries. Varda flat-out tells us that she finds the local more interesting than the global, the small moment more revealing and even thrilling than the big one. This movie is another testament to the totality of her vision. 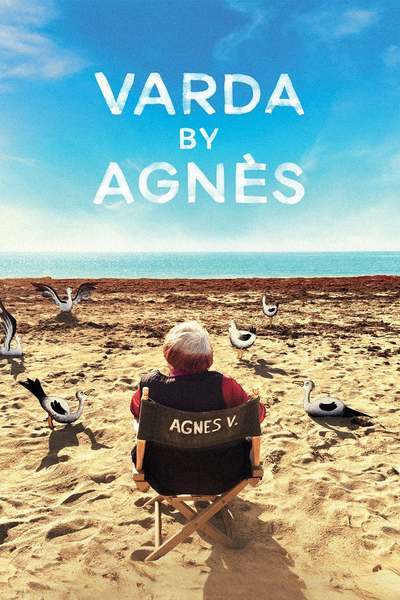 Sandrine Bonnaire as Herself

Nurith Aviv as Herself