“Therefore this is what the Lord says: ‘I will bring on them a disaster they cannot escape. Although they cry out to me, I will not listen to them.” - Jeremiah 11:11

In Rodney Ascher’s  documentary “Room 237,” four theorists attempt to explain the hidden messages in Stanley Kubrick’s movie “The Shining.” The ideas about what the movie is about range from the possible to the downright bizarre. One theory fixates on the possibility that “The Shining” was Kubrick’s way of confessing he faked the landing on the moon footage, and another obsesses over the details of the hedge maze. The other two see evidence that the 1980 film indirectly references either the genocide of Native Americans or the Holocaust.

Like “The Shining,” there are a number of different ways to interpret Jordan Peele’s excellent new horror movie, “Us.” Every image seems to be a clue for what’s about to happen or a stand-in for something outside the main story of a family in danger. Peele’s film, which he directed, wrote and produced, will likely reward audiences on multiple viewings, each visit revealing a new secret, showing you something you missed before in a new light.

“Us” begins back in 1986 with a young girl and her parents wandering through the Santa Cruz boardwalk at night. She separates from them to walk out on the empty beach, watching a foreboding flock of thunderclouds roll in. Her eyes find an attraction just off the main pier, and she walks into what looks like an abandoned hall of mirrors, discovering something deeply terrifying—her doppelgänger. The movie shifts to the present day, with Janelle Monae on the radio as the Wilson family is heading towards their vacation home. The little girl has now grown up to be a woman, Adelaide (Lupita Nyong’o), nervous about returning to that spot on the Santa Cruz beach. Her husband, Gabe (Winston Duke), thinks her reaction is overblown, but he tries to make her feel at ease so they can take their kids Zora (Shahadi Wright Joseph) and Jason (Evan Alex) to the beach and meet up with old friends, the Tylers (Elisabeth Moss and Tim Heidecker) and their twin daughters. After one small scare and a few strange coincidences on the beach, the family returns home for a quiet night in, only to have their peace broken by a most unlikely set of trespassers lined up across their driveway: doppelgängers of their family.

Part of the appeal of “Us” is how you interpret what all of this information and images mean. No doubt the movie will give audiences plenty to mull over long after the credits. In the film, the Jeremiah 11:11 Bible verse appears twice before pivotal moments, and there are plenty of other Biblical references to dig into, including an analogy to heaven and hell. Perhaps Jason’s “Jaws” shirt is a reference to the rocket sweater the little boy wears in “The Shining” or it could be a warning about the film’s oceanside dangers. In the ‘80s scene, when young Adelaide walks into the mysterious attraction, the sign welcoming her is that of a Native American in a headdress above the name “Shaman Vision Quest.” When the family returns to the beach, the sign has been replaced with a more PC-friendly sign bearing a wizard advertising it as “Merlin’s Enchanted Forest,” a bandaid solution to hiding the racist exterior and the horror inside its halls.

As he did with “Get Out,” Peele pays significant tribute to the films that have influenced him in “Us.” Though this time, there doesn’t seem to be a consensus. As I spoke with others who saw the movie, we focused on different titles that stood out to us. For me, “The Shining” looked to be the film that received the most nods in “Us,” including an overhead shot of the Wilson family driving through hilly forests to their vacation home, much like the Torrance family does on the way to the Overlook Hotel. There’s also a reference to “The Shining” twins, a few architectural and cinematography similarities and, in one shot, Nyong’o charges the camera with a weapon much like Jack Nicholson menacingly drags along an ax in a chase. However, “Us” is not just a love letter to one horror movie. Peele also pays tribute to Brian De Palma with a split diopter shot that places both Adelaide and her doppelgänger in equal focus for the first time in the movie. There’s also a tip of the hat to Darren Aronofsky’s “Black Swan” in terms of dueling balletic styles and a gorgeously choreographed fight scene that looks like a combative pas de deux.

This delightfully deranged home invasion-family horror film works because Peele not only knows how to tell his story, he assembled an incredible cast to play two roles. The Wilsons are a picture of an all-American family: a family of four that looks to be middle class, with college-educated (Gabe is wearing a Howard University sweater) parents doting on their two children. Their doppelgängers may look like them and be tied to them in some way, but their lives are inverses of each other, and their existence has been one of limits and misery. It’s one of the most poignant analogies of class in America to come out in a studio film in recent memory. For the actors, it’s a chance to play two extremes, one of intense normality and the other of wretched evil. In “Us,” Duke shows off his comedic strengths as the dorky father who often embarrasses his kids, and his doppelgänger is a frighting wall of violence with little to say other than grunts and fighting his adversary. If Nyong’o doesn’t get some professional recognition for her performances here, I will be very disappointed. As Adelaide, she’s fearful, trying to keep some traumatic memories at bay but putting on a brave face for her family. To play her character’s opposite, Nyong’o adopts a graceful, confident movement for her doppelgänger, sliding into the family’s home with scissors at the ready. The doppelgänger looks wide-eyed and maliciously curious as if she’s looking for new ways to terrorize this family. She whispers in a raspy but sinister voice that would make many people jump and run away.

A suspenseful story and marvelous cast need a great crew to make the film a home run, and “Us” is not short on talent. “It Follows” cinematographer Mike Gioulakis creates unsettling images in mundane spaces, like how a strange family standing at a driveway isn’t necessarily scary, but when it’s eerily dark out, they’re backlit so that their faces go unseen and the four bodies are standing at a higher elevation from our heroes, so it looks like evil is swooping in from above. Kym Barrett’s costume designs not only supply the doppelgängers’ nefarious looking red jumpsuits but also the normal, comfy clothes the Wilsons and Tylers wear on vacation. Michael Abels, who also composed the score for “Get Out,” and the ominous notes from the sound design team lay the groundwork for nerve-wracking sequences.

Jordan Peele isn’t the next Kubrick, M. Night Shyamalan, Alfred Hitchcock or Steven Spielberg. He’s his own director, with a vision that melds comedy, horror and social commentary. And he has a visual style that’s luminous, playful and delightfully unnerving. Peele uses an alternate cinematic language to Kubrick, seems more comfortable at teasing his story’s twists throughout the narrative unlike Shyamalan, uses suspense differently than Hitchcock, and possesses the comedic timing Spielberg never had. “Us” is another thrilling exploration of the past and oppression this country is still too afraid to bring up. Peele wants us to talk, and he’s given audiences the material to think, to feel our way through some of the darker sides of the human condition and the American experience.

This review was originally filed from the South by Southwest Film Festival on March 9, 2019. 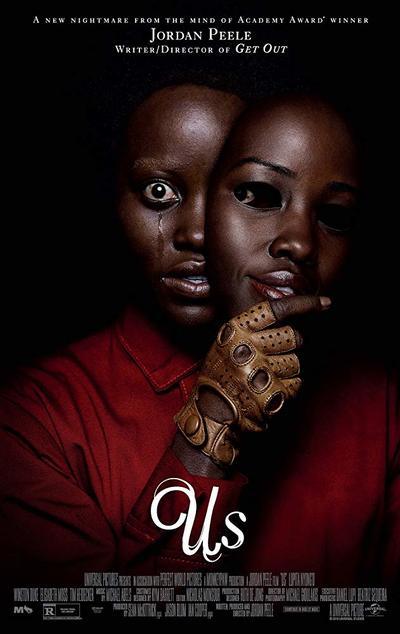 Rated R for violence/terror, and language.