A whole world lies waiting behind door No. 237

What is "Room 237" really about? On the surface, Rodney Ascher's documentary exhibits the theories a few obsessive fans have put forward to reveal what they think Stanley Kubrick's "The Shining" is really about. According to them, Kubrick stashed "hidden meanings" in the vacancies, hallways, ballrooms, bathrooms, walk-in storage areas and hedge-mazes of the Overlook Hotel in his 1980 horror film.

Trouble is, the "Room 237" conspirators — er, contributors — don't seem to realize that those meanings are either not hidden, not meanings or not remotely supported by the secret evidence they think they've uncovered. "Room 237" isn't film criticism, it isn't coherent analysis, but listening to fanatics go on and on about their fixations can be kind of fun. For a while, at least.

Five off-screen narrators pitch various interpretations of "The Shining," accompanied by stock footage, illustrative recreations and clips from Kubrick's filmography. For Bill Blakemore, the subject of Kubrick's "Masterpiece of Modern Horror" is the genocidal slaughter of Native Americans by white European settlers; for Geoffrey Cocks, it's about the Holocaust in Nazi-dominated Europe; for Juli Kearns, it's an exploration of an impossible, Escher-like maze called the Overlook Hotel.

John Fell Ryan has discovered some interesting juxtapositions that occur if you project two prints of "The Shining" on top of each other at the same time, with one running forward and the other running backward. Jay Weidner, who characterizes himself as a "conspiracy hunter," insists "The Shining" is Kubrick's belated, life-risking confession/apology for faking the television footage of the Apollo 11 moon landing on the sets for "2001: A Space Odyssey" at the behest of the U.S. government.

"Room 237" could easily be (mis)taken for a comedic satire of fervent movie-geekery if the theories it presents — some more cockeyed than others — hadn't appeared on the Internet years ago. That's where Ascher found the inspirations for his documentary.

It starts off with a visual trick: In a digitally modified clip from Kubrick's final film, "Eyes Wide Shut" (1999), Dr. Bill Harford (Tom Cruise) stands outside the Sonata Cafe in Greenwich Village, which is actually a set at Pinewood Studios near London (which is the source of a little in-joke: The location is identified as "EUROPE"). But instead of inspecting a display featuring his old friend, pianist Nick Nightingale, he's looking at promotional materials for "The Shining." You could say that "Room 237" is based on a similar illusion, getting us to see things in a movie that either aren't there or aren't what they appear to be.

Let's rewind: Back in 2010, Ascher made a notably similar short film called "The S From Hell," a parodic inquiry into the off-the-wall proposition that the Screen Gems logo, which appeared after episodes of popular TV series such as "Bewitched" and "The Partridge Family" from 1965 to 1974, was so frightening, it traumatized a generation of unsuspecting children. Maybe you don't recall being terrified by this or any other logo? Me, neither. But we could've repressed it.

The goofy premise of "The S from Hell" is no less unlikely than some of the blarney put forward in "Room 237." The movie doesn't judge the relative merits of its subjects' opinions, probably because that might be construed as favoritism. That's understandable. But as a result, the movie lacks examples of sound critical thinking. All we have here are do-it-yourself interactive fan games.

In "The Shining," the genial hotel manager (played by Barry Nelson) mentions that the Overlook was built on an ancient Indian burial ground — a familiar horror-movie trope. Sure enough, the hotel decor is inspired by Native American motifs, as we can plainly see. But what, then, is the movie supposedly saying about the genocide of Native Americans? That their vengeful spirits might come back and kill people at a hotel? As the saying goes, that's not subtext, it's text.

The proponents of the Holocaust and staged-moon-landing scenarios undermine their own hypotheses by backing into them. They start with extraneous information (Kubrick wanted to make a Holocaust movie but could never figure out how; nobody was in a better position than Kubrick to fake moon footage in 1969). Then they scour the nooks and crannies of "The Shining" for anything that could be construed to support, or at least reference, their chosen preconceptions.

So is the recurrence of the number 42 (on Danny's jersey; in the movie "Summer of '42" on TV) an allusion to 1942, the year of the Wannsee Conference when Nazi officials met to plan the Final Solution? What about that German typewriter? And is Danny's hand-knit Apollo 11 sweater linked to the ultra-scary Room 237 because the average distance between the Earth and the moon is 237,000 miles? Even though it isn't 237,000 miles, but let's not allow facts and a few extra zeroes to spoil a juicy conspiracy plot. What if the first word in the famous typewritten "All work and no play makes Jack a dull boy" manuscript could be read as "A11" — as in "Apollo 11"?! What if, indeed.

The double-projection trick isn't a theory at all, just a nifty experiment in randomness somewhat less remarkable than the discovery that Pink Floyd's "Dark Side of the Moon" produces some striking juxtapositions when played along with "The Wizard of Oz." Likewise, it's sorta neat that the Outlook does not have an intelligible floor plan, as it fits with the movie's "lost in the maze" motif. But there's nothing unusual about it. That's the way movie sets are usually built — in disconnected bits and pieces, not as integral units.

Kubrick's longtime assistant and collaborator Leon Vitali (who played Lord Bullingdon in "Barry Lyndon") recently said that "Room 237" had him "falling about laughing most of the time" because he knows these ideas are "absolute balderdash." The Adler typewriter, for example, belonged to Kubrick himself, and that particular model was once as commonplace as late-model iPhones.

Any movie is the product of forethought, accident and improvisation. In the end, once the film is released, the filmmakers' intentions don't really matter anymore because it belongs to the audience. At that point, if something's there, it's there. "Room 237," regrettably, isn't all there. 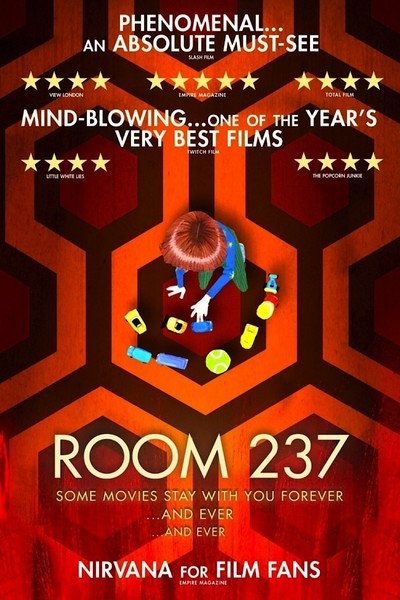