The Mountain Between Us

She once survived a sinking ship in "Titanic." He once thrived on the mean streets of Baltimore on “The Wire.” Kate Winslet and Idris Elba should by all rights have enough dramatic weight between them to easily elevate a two-hander about strangers who must rescue themselves from a desolate snow-blanketed Utah mountain range after their charter plane crashes.

Instead, “The Mountain Between Us” is a high-altitude soap opera, woozy with overly telegraphed peril and determined to make the audience root for a couple who clearly aren’t meant for each other and played by actors who deserve a generous C-minus in chemistry. In the film’s production notes, Elba—considered dreamboat material by his many fans—notes that this is his first-ever romantic lead. His surprising awkwardness during the film’s intimate moments perhaps explains why.

What really comes between Winslet’s globetrotting photojournalist Alex and Elba’s brain surgeon Ben as fate and bad weather bring them together isn’t so much geographical but script-related. Based on a novel by Charles Martin, the screenplay is a collaboration between Chris Weitz (“About a Boy,” the live-action “Cinderella”) and J. Mills Goodloe (“The Age of Adaline,” “Everything, Everything”). I’ll vouch for Weitz’s skills, but in the case of Goodloe, anyone who has adapted a Nicholas Sparks’ novel that isn’t “The Notebook” is suspect. And having seen “The Best of Me,” I rest my case.

Palestinian director Hany Abu-Assad, the maker of two politically charged Oscar-nominated foreign films (“Paradise Now” and “Omar,” the last featuring a love story) certainly has cred. But he fails to achieve producer Peter Chernin’s self-proclaimed vision of a romantic epic in the tradition of “Dr. Zhivago” and “Out of Africa.” Compared to those classics, “Mountain” is more of a molehill.

Right out of the gate, I had an uneasy feeling about “The Mountain Between Us” as all flights are canceled at an Idaho airport because of an incoming blizzard. Alex, desperate to head back to New York in time for her wedding, overhears Ben complaining that he has to operate on a young boy the next morning. She proposes they share a small plane for hire. Their pilot is Beau Bridges, who emits good ol’ boy vibes as he brings his soulful-eyed golden Labrador on-board. That his Walter doesn’t bother to file a flight plan is an all-too-convenient warning sign.

Not long after takeoff, while flying over remote treacherous terrain packed with white stuff, Walter begins to slur his speech and Ben recognizes he is having a stroke. Thank goodness, I have never witnessed anyone having such an attack. But Bridges, perhaps making up for the brevity of his part, seems to have taken his cues from Ian Holm’s Ash, the malfunctioning android in “Alien.” The crash itself isn’t all that terrifying in these days of “Flight” and “Sully.” But Walter is a goner, the dog survives and he is in better shape than Alex, who has a huge gash on her leg. Ben—oh, thank goodness, there just happens to be a doctor in the house—fixes her up as best he can before tending to his own cuts and bruises.

The medical stuff is the easy part. Cooperating with someone you just met is a bit tougher. Once Alex wakes, she reveals herself to be someone prone to taking risks and usually trusts her instincts in tight situations. With no cell phone reception and with all devices that could have alerted the occasional jet overhead unfortunately out of commission, she thinks they should abandon ship and take their chances on foot. The more conservative Ben, meanwhile, is less inclined to leave what’s left of the aircraft and would rather stay put. As she heals, the pair has a get-to-know-you period. Oddly, Ben wears a wedding ring but does not mention his wife. Alex, meanwhile, knows that if she had made it to her nuptials, she would have “rushed down the aisle like Dustin Hoffman in ‘The Graduate.’” Ben waits a beat and echoes the thoughts of many a cinephile in the theater by observing that Hoffman was trying to stop the wedding. For emphasis, he meekly utters, “Elaine!”

That is meet-cute stuff right there but the early portion of “The Mountain Between Us” suggests a variation on “When Harry Met Sally…” Namely, can a man and a woman become companions and work together for a common cause? (That cause here being survival.) I liked that there seemed to be no lovey-dovey business at this point. But then Alex looks through her camera lens and sees a metallic glint off in the distance. Off they go with their makeshift emotional therapy dog in tow and the days-long trek forces them to cuddle against the cold at night. And, all too soon, the movie takes a tumble from which it never recovers.

I should have known when Ben early on portentously utters, “A heart is nothing but a muscle” that this movie, just like the plane, was destined to crash. Not to spoil the ending, which is corny as a crate of Cracker Jack, but It seemed almost inevitable that Alex’s perfectly nice yet bland fiancé would be Dermot Mulroney. For him, such roles are like Morgan Freeman playing the president or God. Meanwhile, weep not for our stars. Winslet’s career overcame the laborious “Labor Day” and Elba isn’t going to let the deadly “The Dark Tower” get him down. Besides, once you realize that “The Mountain Between Us” almost falls into the so-bad-it’s-good category, it just might become destined for riff-worthy cultdom. 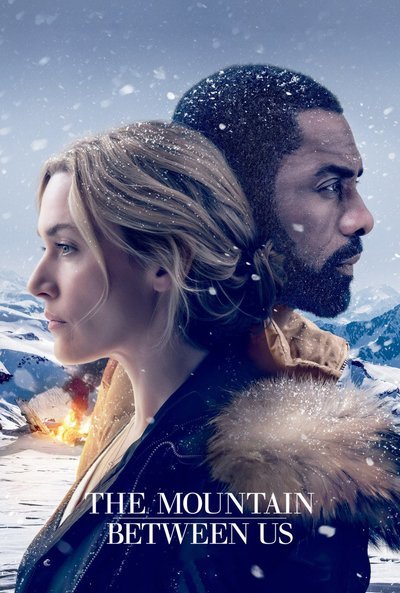