Charismatic film actors can work miracles with so-so material. But there usually comes a point when they can no longer camouflage that the story they are so earnestly committed to telling is somewhat suspect.

For at least half of “Everything, Everything,” the latest best-selling young-adult novel to find its way to the big screen, I was content enough to simply bask in the company of 18-year-old Amandla Stenberg (Rue in “The Hunger Games” franchise) and 22-year-old Nick Robinson (“Jurassic World”), the two attractive leads who star as Maddy and Olly in this adolescent romance. Blessed with bright blemish-free faces, a precociously articulate way with words as they discuss calculus and literature, knock-‘em-dead smiles and effusively emotive hair, this pair’s presence puts a welcome sheen on an old thematic chestnut: the destiny-driven infatuation that won’t be denied, even in the face of a potentially lethal disease.

The malady in question? Maddy is a “bubble girl,” meaning that she suffers from severe combined immunodeficiency aka SCID. As a result, she is allergic to the outside world and must live in an antiseptic environment (complete with a stylish mostly white and certainly organic wardrobe). There have been “bubble boys” on TV (John Travolta in 1976’s “The Boy in the Plastic Bubble” and that sore-loser Trivial Pursuit player on “Seinfeld”) and in movies (Jake Gyllenhaal in the 2001 dramedy “Bubble Boy”). But a female version is a rarity and the so-called bubble in this case could pass as something out of a high-end décor magazine for medical patients. The hermetically-sealed contemporary abode in Los Angeles features plenty of spacious windows so that Maddy can at least pretend she can connect to the world beyond her laptop—something she hasn’t been able to do in 17 years.

Luckily enough, single mother Pauline (Anika Noni Rose of the film version of “Dreamgirls,” a Tony winner whose abilities are at half-tapped here) is a caring doctor who tends to all her daughter’s health needs as well as a vigilant warden who makes sure she is never exposed to harmful elements. She is especially cautious since her husband and a son died in a car accident years ago. Soon after, Maddy got terribly sick and that was that. But then new neighbors move in and, lo, Maddy spies Olly, the super-cute skateboarder next door, who makes eye contact and waves as she peers through glass.

In what seems to be a clever play on the balcony scene in “Romeo and Juliet,” the love-struck pair can see into each other’s bedroom window and communicate by various means. They initially bond over silly pantomimed jokes at the expense of a misbegotten bundt cake baked by his mother and rejected by Pauline since, you know, germs. Then Olly writes his cell phone number on his pane, and soon they are whispering sweet text messages to one another at all hours of the night. There is even a kindly nurse a la Shakespeare named Carla (Ana de la Reguera), who acts as their sympathetic go-between and goes so far as to let Olly into the house after he promises to keep a safe distance from Maddy (fat chance).

I like how director Stella Meghie brings to life Maddy’s architectural models of a diner and a library as she imagines that her text message exchanges with Olly are face to face conversations taking place in life-size versions of her creations. It allows the movie to breathe. That an astronaut figure that inhabits her miniatures also shows up as a character is a nicely humorous and surreal touch. And the matter-of-fact portrayal of a bi-racial relationship is presented just as it should be—unremarked upon.

But, at a certain point, when Maddy starts to rebel against her mother’s strict rules and Olly’s father becomes abusive, it is inevitable they will run away—and to a beach, since that is Maddy’s dream. Think “Love Story” crossed with a PG-13 “Blue Lagoon” minus the ickier stuff. That is where logic begins to go askew. Yes, you can get a credit card at 18 just by signing up for one online. Yes, you can buy plane tickets with it on a web site. But how can you fly without ID since she surely doesn’t have a driver’s license, given her response to being in a car with Olly behind the wheel. Plus, you just know there will be a BIG TWIST coming eventually and, when it does, it drags everything down with it.

Being around any young people in the throes of a blossoming crush can be a tonic, a contact-high reminder of how it feels to be so consumed by such a rush of intense feelings. It can also be annoying as hell, especially when they shut out the rest of humanity including those who care about them the most. “Everything, Everything” tries to have it both ways and only partially succeeds in being the right romantic medicine. 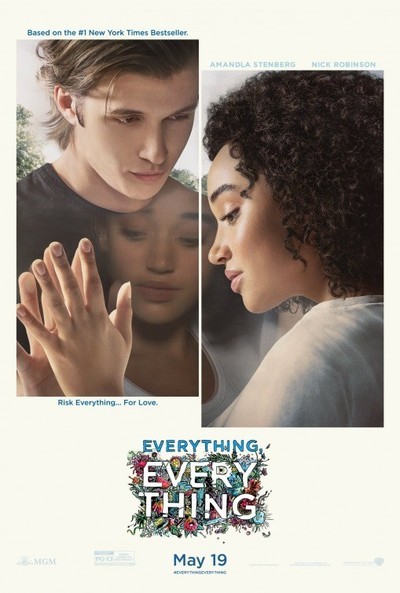