A lack of tonal self-awareness pervades "Labor Day," like the scent of a freshly baked peach pie wafting through the thick summer air.

Ah, yes. About that pie: it's the main thing viewers have talked about since "Labor Day" premiered at the Toronto International Film Festival and had a quick run in theaters in late December to qualify for awards consideration. Before anyone saw the film it made sense (on paper, at least) that we should take it seriously. Jason Reitman ("Juno," "Up in the Air," "Young Adult") is the director. Josh Brolin and Kate Winslet, both versatile actors, are the stars. Brolin plays a hunky convicted murderer who's just escaped from prison, Winslet a lonely divorcee raising her 13-year-old son in a rundown house in small-town New Hampshire. Over one unusually hot holiday weekend, they fall in passionate, doomed love—and they bake a heavily metaphorical pie.

It's hard to tell what Reitman—who also wrote the script, based on the novel by Joyce Maynard—intended here. He's crafted a handsome but very self-serious melodrama, seemingly without realizing how unintentionally hilarious some of his more romantic, dramatic moments are. Perhaps he meant it as an homage to a bygone era: the so-called women's pictures of Douglas Sirk from the 1950s. What he's come up with hews more closely to the shameless sentimentality of a gauzy Nicholas Sparks adaptation.

The year is 1987. Shy, quiet Henry (Gattlin Griffith) is about to go back to school for the fall. His mother, Adele (Winslet), wills herself to drive him into town to buy clothes and supplies. Ever since her husband (Clark Gregg) left them, she's been a shaky shell of her formerly vibrant self, afraid to leave the house or make eye contact with anyone.

While they're at the store, a tall, dark stranger named Frank (Brolin) approaches Henry and asks for a ride. Actually, he insists on one. He's bleeding, intimidating and obviously dangerous—but also, you know, extremely hot. So the three of them go back to Adele's home to give Frank a place to hide out until nightfall. Instead, he ends up staying for the next four days. Because you know what? It turns out Frank isn't such a bad guy after all.

Rather than threatening Adele or Henry, Frank politely suggests that perhaps he should tie her to a chair, just so she can tell authorities truthfully that she was held captive. (The artful lighting as he wraps the rope around her wrists is the stuff of late-night Cinemax fare.) He proceeds to make her the most delicious-looking chili from various items she had lying around her kitchen (you pour a little coffee in—who knew?) and then lovingly spoons tidy bites of it into her mouth. This goes beyond Stockholm Syndrome, into sheer seduction.

Over the next few days, the too-good-to-be-true Frank satisfies every need in Adele's life, functioning as a husband and father figure as well as a handyman. He changes the oil in her rickety station wagon and clears dead leaves out of the gutters. (How's that for sexual symbolism?) He mops and waxes the floors. He does laundry and irons the clothes (shirtless, natch). He teaches Henry how to play baseball in the afternoons. And with dizzying speed, he makes his way into Adele's bed, reminding her what it's like to have a muscular man wrap his arms around her at night.

Did we mention that he also bakes?

When a neighbor (Reitman regular J.K. Simmons) stops by with a bucket full of peaches—as neighbors are wont to do when a fugitive is hiding in your home—Frank promptly gets to work teaching Adele and her boy how to make pie. He's such an intuitively domestic creature, he doesn't even measure the ingredients. And when it comes time to mix that ooey-gooey, fruity, sugary mess together, he insists that all three of them get in there, plunge their hands inside, let their fingers intertwine, squish it all around. Inevitably, this major set piece is reminiscent of the famous pottery scene in "Ghost," not just in its staging but in its comparative lack of passion.

Reitman does create some moments of genuine tension when it looks as if Frank and his makeshift family are on the verge of getting caught; one involving James Van Der Beek as a subtly snoopy police officer stands out. And Henry's blossoming relationship with the bored, precocious new girl in town (Brighid Fleming) shows glimmers of the kind of snappy, darkly funny style that is Reitman's trademark.

More often, though, the film seems content to smother us with heavy-handed sentiment, complete with voiceover from Tobey Maguire as an older version of Henry which spells out everything the characters are obviously thinking and feeling.

Actors of the caliber of Brolin and Winslet can do nothing but the best with what they're given, struggling to find nuance and humanity in romance-novel archetypes. She's damaged and fragile and longing for a man's touch. He's rugged and misunderstood with a longing of his own for family, stability. They take their roles seriously. It will be difficult for audiences to do the same. 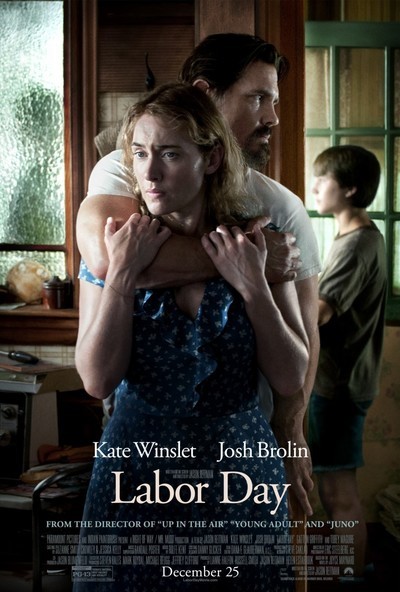