The 1990s now feel like a memory, distant enough to dress up a film with period-specific melancholy. Just consider the batch of various recent and upcoming releases—Carla Simón’s “Summer 1993,” Elijah Bynum’s “Hot Summer Nights” and even Jonah Hill’s upcoming directorial debut “Mid90s.” But Desiree Akhavan’s poised coming-of-age drama “The Miseducation of Cameron Post,” the deserving winner of the Grand Jury Prize at the 2018 Sundance Film Festival, is not just any period film, despite being set in 1993. Neither a hazy recollection nor a wistful retelling of the past, Akhavan’s sophomore feature as a narrative writer-director (her follow up to the loose and very funny “Appropriate Behavior”) is instead a clear-eyed examination of a self-assured female gay character from the past, both ahead of her teenage years and the era through which she lived them.

Co-written by Cecilia Frugiuele and adapted from Emily Danforth’s acclaimed 2012 YA novel, “The Miseducation of Cameron Post” is the survival story of a young, orphaned, small-town Pennsylvanian, forcefully sent to a Christian gay conversion therapy camp, armed with nothing other than her non-negotiable sense of identity. The terrifically versatile Chloë Grace Moretz plays Cameron, bringing out both her character’s youthful curiosity and precocious maturity. This is the pre-marriage-equality era when liberals slapped “Clinton/Gore” stickers on their vehicles; before mainstream Hollywood and cable TV earnestly stepped in with stories of LGBTQ acceptance; and a time where the ripple effects of the AIDS crisis that unjustly spread hateful rhetoric on homosexuality were deeply lived and felt. But almost like a quiet revolutionary, Cameron somehow seems to know better than hating herself, despite the odds that are stacked against her. She proves to have a stubbornly strong head on her shoulders—she shows us as much early in the film, when she looks at the dressed-up image of her prettified self in the mirror with foreign eyes and wipes off the excess lipstick her adoptive mother (or a family member, possibly an aunt) had dotingly put on her moments ago.

All that prep is for Cameron’s high school prom, during which she will be caught passionately making out with the prom queen Coley Taylor (Quinn Shephard of “Blame”) in the backseat of a car, sealing her fate with a stay at a facility known as “God’s Promise.” There, Cameron becomes known as a disciple, joining a group of other male and female disciples trying to “cure” their SSA (same-sex attraction). That’s what the leaders of the facility—the stern, Nurse-Ratchet-like Dr. Lydia Marsh (Jennifer Ehle, quietly terrifying with her fake smile) and her visibly oppressed, “ex-gay” brother Reverend Rick (John Gallagher Jr.) call homosexuality. In fact, Dr. Marsh goes as far as stating, “there is no such thing as homosexuality.” Tasking all disciples with gradually filling out their personality icebergs—an exercise aiming to surface the kids’ supposed reasons to engage in SSA—she systemically breaks down their will to exist in the way they were born.

But despite all the silent emotional abuse, Cameron knows she’s just a perfectly normal teenager responding to her natural, budding desires. This unique awareness both surrounds her with an invisible shield (a fellow disciple even accuses her of being arrogantly closed off), and unites her with likeminded teens, also biding their time to leave the facility. One of them is Jane Fonda (no, really), played by “American Honey”’s Sasha Lane, who brings a vivacious blend of sarcasm and vulnerability to the role. The other is Adam Red Eagle (Forrest Goodluck of “The Revenant”), Jane’s best friend and only ally. Soon enough, the makeshift trio forms an unbreakable bond; going on frequent hikes, smoking plenty of weed (which Jane grows out in the woods and hides in her prosthetic leg) and faking their way through various therapy sessions with bogus contributions. Cameron in due course learns what she’s supposed to say to please Dr. Marsh, who perennially looks to be stuck in a different era with her matronly, ‘80s-channeling outfits. Like a lying inmate fishing for parole, Cameron blames her SSA on masculine sports one day; and claims to have mixed up “wanting to be Coley” with “being attracted to her,” the next.

While a heartrending tale in which tragedy inevitably (and predictably) occurs, “The Miseducation of Cameron Post” is not the doomed story of torture and abuse you might expect. On the contrary, it’s an “It Gets Better” story of salvation, in which Akhavan films the teens’ bonding (this includes physical intimacy and sex through well-conceived flashbacks) earnestly with a sense of hope akin to that of John Hughes. Her on-the-whole serene and gently lit film might seem a bit naïve and even a tad short on character development, but the story of Cameron Post thankfully is far from dated. Given that conversion therapy is still inexplicably legal in 41 states, Akhavan’s film of acceptance and optimism feels as urgent as ever. 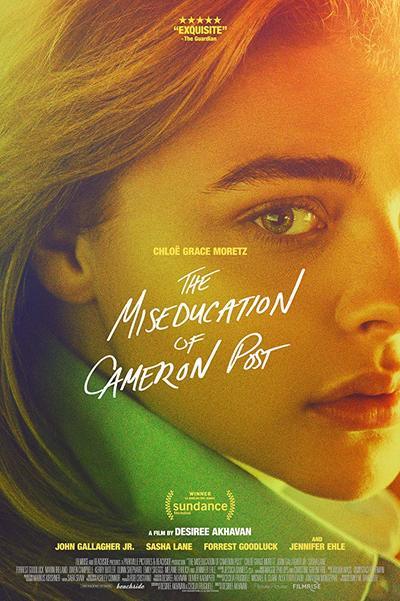