When we first see teenager Abigail Grey, she is in her bedroom, buttoning up a conservative white blouse, putting on a calf-length plaid skirt. Glass animals line the window sills. Before she leaves, she picks up a copy of Tennessee Williams' The Glass Menagerie, revealing Flora Rheta Schreiber's Sybil underneath, the 1973 book about a woman with multiple personalities. It's hard to tell what time period we're in. It seems from the jump that "Blame" will not be your typical coming-of-age tale.

It's not. Quinn Shephard, 22 years old, plays Abigail, and not only directed the film but wrote the script while she was still in high school. "Blame" uses the familiar scaffolding of other high school stories: social ostracism, peer pressure, absent adults, and yet it swirls with strangeness, both subtle and deep, breaking rules as it goes. The film gets increasingly hallucinatory as it progresses, and there's a vivid sense of growing danger.

Abigail reenters high school after six months in a psych ward. It's unclear what caused her breakdown. She is a notorious figure, surrounded by snickering and mockery. She walks through the hallways in her anachronistic clothes like an apparition. She also limps. But only sometimes. Is she trying to be Laura Wingfield in The Glass Menagerie? Shephard keeps Abigail cloaked in mystery, and that's one of the film's greatest strengths. On the surface, she's a shy wallflower, but there's something underneath. It soon becomes clear that Abigail's behavior is impossible to predict.

Tough Melissa (Nadia Alexander), with hair dyed Crayola-red, zeroes in on Abigail, especially when Abigail is chosen to play "Abigail" in the student production of Arthur Miller's The Crucible, while Melissa is stuck with being Abigail's understudy (echoes of Eve Harrington in "All About Eve"). Melissa jams a wedge between two close friends—Sophie (Sarah Mezzanotte) and Ellie (Tessa Albertson)—shutting out the clear-headed Ellie in favor of the anxious follower Sophie, who is all too eager to "help" Melissa in her campaign to bring Abigail down. Chris Messina plays Jeremy, a new teacher at the school, working with the kids on The Crucible. A failed actor, Jeremy shows a critical lack of judgment when he decides to play John Proctor opposite Abigail's "Abigail." He asks her for help organizing the showcase, and they spend a lot of time together, rehearsing the scene. Melissa misses none of this. Trouble's coming.

Shephard uses The Crucible as an organizing principle, calling upon its rich symbols and texture, both explicit and implicit. It's part of why "Blame" is so beautifully intense. Will Gluck did a similar thing in "Easy A," where Emma Stone's character is inspired by Hester Prynne in The Scarlet Letter to attention-getting lengths, although Shephard uses the source material a little differently. Arthur Miller wrote his paranoid play about the Salem witch trials as an allegory for the broad swath "McCarthyism" cut through American life in the 1950s, but with the play's visions of teenage girls doing wild things in the woods, tapping into their sexual power in a frightened Puritanical world, it reaches far beyond its original inspiration. Shephard sees in it high school writ large, where whispering gossip, false accusations, and sexually charged teenage girls make a potent witches' brew.

As the film progresses, Abigail's identification with the fictional "Abigail" takes the place of her limping identification with Laura Wingfield. Gone are the plaid skirts and white blouses. She shows up for school in prim black dresses with white collars, and a huge cross necklace. But then, growing in confidence, her skirts get shorter, her heels get higher. Abigail, the temptress in The Crucible, asserts her dominance on the imagination of this damaged teenager. Celeste Montalvo designed the costumes, and her excellent work is a huge contribution to the film. Abigail's transformation has an effect on the other girls, whose own wardrobes get more outrageous to compete with hers.

Messina has a difficult role to play here. Jeremy is an immature, passive man, and touched by Abigail's intensity as an actress. His girlfriend thinks he's a loser and Abigail looks at him with devotion. It's a combination he finds irresistible. Messina does not play Jeremy as a predator, although the character's actions clearly cross all kinds of lines. If John Proctor found his Abigail more than he could handle, so too does Jeremy find his. It's a very good performance.

There are multiple scenes in the auditorium, and cinematographer Aaron Kovalchik films the space as though it is an echoing chamber where time stands still, where people get to inhabit their dreams of themselves. Abigail stands onstage staring into the darkness, bathed in blood-red light. Abigail and Jeremy run lines, their heads haloed with light against the black. There are other beautiful sequences like Melissa and Sophie swimming on a rainy night, splashing around like the kids they still are; the grim-faced Melissa leading the cheerleading squad in a routine, shown in ominous slo-mo; the deep blue shadows in the car where Jeremy and Abigail sit and talk.

This is not the kind of film where people pushing 30 wear cheerleaders' outfits and pretend to be 18. These young actresses feel like real teenagers. The power plays and alliance shifts evoke the destabilized atmosphere of adolescent girls. They're 16, and they shut each other down by calling each other "slut," "bitch," and worse. "Blame" surges with insight about the sexuality of teenage girls: before they can even figure out what they like, they feel obligated to put on a show of it for the boys. They are thrown into competition with each other. It's all performative. They don't even know they can opt out. Only Ellie seems to understand she gets to make her own rules.

None of this is news, necessarily, but Shephard attacks the topic in creative ways, allowing for ambiguity, complexity, theatricality. The only time I was reminded that a teenager wrote the script was in the scenes between Jeremy and his girlfriend. These scenes have a "stock" quality completely absent in the rest of the film. Other than that, there are many surprises in store. Melissa is not a villain, Abigail is not a saint, but it's clear there's not enough room for the both of them. With the perspective of adulthood, such battles seem silly, but in the thick of high school, it's life or death. As Mrs. Thomas Putnam cries out in The Crucible, "There are wheels within wheels in this village, and fires within fires!"

"Blame" crackles with fires within fires. 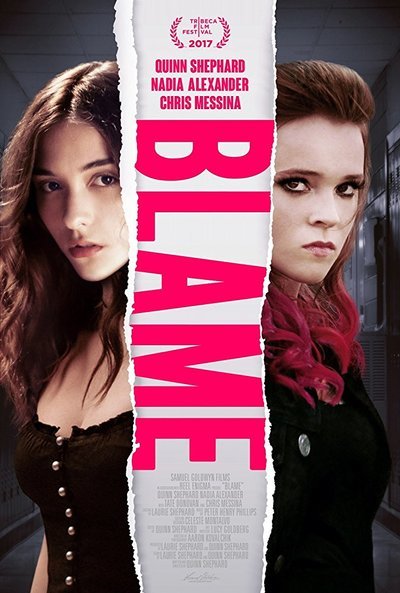