"Can you tell I'm dead inside just by looking at me?" deadpans Shirin, a bisexual Iranian-American Brooklynite who just broke up with her girlfriend Maxine. The deadpan tone is dominant throughout "Appropriate Behavior," a really promising debut from writer/director (and star) Desiree Akhavan. Movies about 20-somethings wandering through Brooklyn, going to parties, having relationships, and then talking about it over lattes have become so cliched that a new "way in" to it doesn't even seem possible. But "Appropriate Behavior," even with its reliance on familiar types and tropes, feels like a unique vision of life seen through unique eyes. And so although we have all seen movies about deadpan Brooklyn hipsters, we haven't quite seen this yet. Akhavan uses the clichéd environment and characters (aimless hopeful artists, cool parties, flat-affect wit) in order to highlight some of the voices and energies that have (typically) been left out of such stories up until now. There's something fresh going on here, and it marks Akhavan as a filmmaker (and actress) to watch.

Shirin is the child of immigrants from Iran. She is not out to her parents, a major bone of contention in her relationship with Maxine (Rebecca Henderson), although Shirin berates Maxine for not getting it: "I come from Iran, Maxine. You know, where they stone gay people?" Shirin's parents (Anh Duong and Hooman Majd) are highly accomplished individuals, as is her judgmental brother Ali (Arian Moayed), a urologist engaged to be married to a plastic surgeon. Shirin's parents still ask their daughter, hopefully, if she's met any nice boys. They assume that Shirin and Maxine are just friends and roommates (who happen to have only one bed in their apartment).

Shirin loves her family, although her parents' loving concern of her often feels like pressure. She senses that she's a disappointment to them. She's a disappointment to herself. She rarely leaves her borough. She has a Masters in Journalism but doesn't use it; instead, she teaches a filmmaking class to rowdy 5-year-olds at a competitive Park Slope school and lives behind a curtain in a sprawling Bushwick apartment/artist-space with two slightly frightening roommates. The relationship with Maxine (told through flashbacks) was all-consuming, and Shirin has sentimentalized it in memory, telling a friend, "We were an It Couple." Maxine is self-righteous and judgmental, cloaked in identity politics. On their first meeting, Shirin, drunk, wearing a tiara at a New Year's Eve party, looks at Maxine's rather severe outfit and says, "I love dykes." Maxine tells her how offensive that word is. Shirin is baffled. She meant it as a compliment.

Ultimately, what we end up seeing is that Shirin doesn't fit in anywhere. She is bisexual, which means she's somewhat an object of suspicion to more strict lesbians. "This is just a phase for you," sneers Maxine at one point. With her parents, she puts on the face of the obedient Persian daughter, leaving out the vast majority of who she is in order to get along. At a raucous Persian Nowruz party, she gossips and commiserates with the Persian girls she grew up with, but feels completely cut off from engagement. She is unable to engage fully with any one group.

The appeal of the relationship with Maxine is never really evident in the film, and that is one of the flaws of the deadpan approach. When real feeling comes up, the deadpan tone leaves you nowhere to go. You have deadpanned yourself into a corner. In other films about lost love, like "Annie Hall," a clear influence on "Appropriate Behavior," everything in the past is suffused with magic and the longing of retrospect. But Shirin and Maxine seem like a mis-match from the beginning, and Shirin deadpanning about how she is "dead inside" adds to the overall disconnection from warmth and feeling.

Perhaps, on some level, "Appropriate Behavior" is all about that. For Shirin, what is "appropriate behavior" depends on her context. Her parents expect certain things of her. They love her, but she is terrified of what will happen when they find out she likes women. Maxine wants her to be more appropriately gay, more in line with the lesbian scene, she is annoyed when Shirin befriends a drag queen at a Pride Week party. Maxine thinks Shirin is a tourist in the gay world. But Shirin is a tourist everywhere: that's the problem.

Her tourist stance makes her awkward. That awkwardness is extremely honest, and Akhavan is wonderful in showing Shirin's various defense mechanisms, with other more politicized gays, with people who treat her Iranian-ness as "exotic" and ask her to weigh in on "that whole situation over there." She's a representative of a mysterious group and is treated accordingly. A prospective boss in a job interview is openly agog when she says that yes, she goes to Tehran every summer to visit family. Tehran to him is like the Emerald City, he's seen documentaries about the "whole underground hip-hop scene" there … is she into that at all? Shirin says patiently that no, her visits to Tehran involve hanging out with her grandmother and watching Disney movies. The guy looks disappointed. He was hoping for stories of oppression and hijabs and courage.  Explaining her Iranian-ness to uncomprehending Americans is a part of her everyday life. And this, this is the element of "Appropriate Behavior" that shows Akhavan's true voice.

As a writer, Akhavan has a lot of fun sending up certain Brooklyn types with one or two brutal lines. Shirin meets up with a guy from OK Cupid, and he tells her his art "defies labels," that he wants to use his stand-up comedy "to bring attention to social justice issues." She has an interaction with a lingerie saleswoman who seems to see her job in the context of helping women with their self-esteem issues. The saleswoman says to Shirin, "Just because your breasts are small doesn't mean they're not legitimate. It's okay to be angry." Shirin was just looking for some underwear, not a therapeutic pep-talk. Akhavan has a loopy lampooning spirit, ultimately, and at one point she clocks the deadpan tone of her own film when Shirin lambasts one of her dates, "What's up with your passive disinterest in everything? What happened at Wesleyan that did this to you?"

Akhavan gets that the deadpan tone is limiting, that it has limited Shirin, not only in her engagement with her own life, but with her family, her friends, her girlfriends and boyfriends, her Iranian-ness, her American-ness. She's got to integrate, she's got to find a way to live a whole life, uncompartmentalized and free. The children of immigrants have a very specific outlook on what it feels like to have a foot in two worlds. As a director, Akhavan steers the ship confidently. It's not flashily filmed, there's nothing to distract from the story itself. There's a lot to get across here, a lot of information, but the real strength of "Appropriate Behavior" is that you can sense, in every scene, that Akhavan really has something to say. This story comes from her, and it could only come from her. 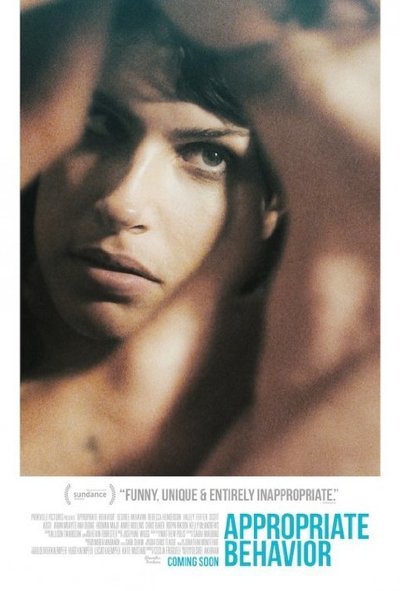