When Hunter Strawberry (Alex Roe) makes his first appearance in "Hot Summer Nights," writer/director Elijah Bynum's feature film debut, we've been well prepared. People have talked about him constantly before he shows up, so we're primed to gasp at his manliness, his sexy forehead wrinkle, his charismatic power. Hunter Strawberry is not only a legend in the small Cape Code town where he lives, he has a legendary name. Filmed like a Greek God Grease Monkey, Hunter emerges from his muscle car in slo-mo, aware that all eyes are on him, and yet he doesn't preen. He's self-possessed and powerful. Scrawny Daniel (Timothée Chalamet) stares, gaga. It's a good moment, epic in scope, tuned into the teenage milieu of the film, where adults are nearly absent, where kids create their own hierarchies, and where someone like Hunter - with a sketchy past, a mysterious present, and grease under his fingernails - is an unattainable object of desire, lusted over, feared, gossiped about relentlessly. Although it's key to what Bynum appears to be after, "Hot Summer Nights" does not sustain the mood generated in that moment. The film is a disappointingly empty experience.

Daniel, grieving for his dead father, is sent to stay with his aunt on the Cape for the summer. There, he finds himself immersed in the culture clash familiar to anyone who grew up in a tourist-trap beach town. There are the "townies," locals who live there year-round, and the "summer birds," tourists with yachts, fancy cars, and cardigans draped over their shoulders, showing up en masse after Memorial Day. Daniel is in an in-between position: he is both townie and summer bird. Hunter, hounded by the local cops (one in particular, played by Thomas Jane), befriends Daniel and Daniel hops aboard Hunter's successful weed business, urging Hunter to think bigger. (Nothing we've seen in Daniel suggests he'd be the type of person yearning to bring cocaine to the Cape.) At the same time, and separately, Daniel starts a sweet romance with Hunter's sister McKayla (Maika Monroe), the townie hottie with a bad reputation, strutting around in stonewash short shorts, popping Bubblicious bubble gum. Hunter has forbidden Daniel to get involved with his sister. And McKayla tells Daniel to never get involved with her brother. Much of the film is taken up tiresomely with Daniel hiding his involvement with each from the other.

The story is narrated by a kid who doesn't appear in the movie until the very end, and he relays to us the gossip, rumors and speculations swirling around the events of the summer of 1991 leading up to the cataclysm of Hurricane Bob. It's a game of telephone about Hunter, about McKayla, well-known figures around town. Townspeople share their "takes" directly to camera ("I heard Hunter killed a man," drones one kid), and for a while this device has intriguing possibilities. It keeps us at arm's length from the characters (cue Hunter's majestic entrance). Bynum is "going for something" here, a documentary-style providing an outside view on how a town sees its own history, how the truth morphs through repetition, how people (especially McKayla) are judged unfairly by those who don't know them. This could have worked. (Richard Linklater pulled it off beautifully in "Bernie.") But Bynum drops the device and the film moves into a more standard "coming of age" tale, showing Daniel's transformation from awkward outsider to wannabe drug kingpin. Without the device, "Hot Summer Nights" stumbles, grasping for meaning and mood, relying heavily on one of the more insistent soundtracks in recent memory.

Events rattle by too fast for any real feeling to develop. When Daniel and McKayla sit on the hood of his car, looking at a field lit up with fireflies, it should evoke the heartache-y beauty of remembered first love. But with everything else going on, the moment doesn't have anywhere to land. The narrative is punctuated by constant interruptions (a song, a pop culture montage), that it's not clear what the stakes are supposed to be. Is this about Daniel's fall from innocence? Is this a story about the tragic untapped possibilities in a guy like Hunter? Chalamet, so responsive and alive in "Call Me By Your Name," so funny and deadpan in "Lady Bird," seems underwater here, using randomly placed pauses to indicate the character's youth and uncertainty. He barely registers. Alex Roe is handsome, sensitive, and does the job well, but his character lacks the epic quality suggested by that first entrance.

"Hot Summer Nights" suffers from a serious sense of dislocation, even though the "where" and the "when" are stated outright. It's supposed to take place in Cape Cod, but, maybe because it was shot in Atlanta, you don't feel the specificity of "the Cape" at all in the film's locations. Hurricane Bob is the Pathetic Fallacy writ so large it could be seen from Jupiter, and yet there's no sense these people—raised on the Cape—are practiced hands at hurricane preparation. We never see them buying canned goods, taping up windows, battening down the hatches. They just sit in their houses, listening to the wind rise, looking fearful. It's supposed to take place in 1991, but the songs, the clothes, the attitudes all feel more 1981 (or 1961, for that matter). Nirvana's Nevermind was released in September 1991, and a quick look at Billboard's Top 100 of that year shows the serious "break" that that album represented. (Bryan Adams had the #1 song in 1991. Paula Abdul was in the Top 10.) The songs in "Hot Summer Nights" range from Harry Nilsson to the Shangri-Las. The Zombies show up, as does Linda Ronstadt. "Vitamin C", a 1972 song by Can, makes an appearance. The song was just featured prominently in "Inherent Vice" and its use here, like so much else, comes off as derivative.

"Hot Summer Nights" evokes movie cliches: "GoodFellas," "Boogie Nights," "A Place in the Sun," "Rebel Without a Cause", but its main wellspring is the work of S.E. Hinton, and "Hot Summer Nights" fails to go as far as it could in that direction. To a teenager, a 20-year-old guy like Hunter is the apex of all things cool. He is a throwback with sexuality like a supernova, pulling boys and girls into his magnetic forcefield. Hinton perfected this archetype in the ragtag group of "greasers" in The Outsiders and pushed it even further in Rumble Fish, where "Motorcycle Boy" is so legendary he doesn't even have a name. A direct descendant of Marlon Brando's Johnny in "The Wild One," ("Hey Johnny, what are you rebelling against?" "Whaddya got?"), Motorcycle Boy exists on an abstract plane of independence, philosophy and sex appeal. Hunter Strawberry seems unfocused by comparison.

It's a bummer, because Bynum has a good eye. His ideas are there, you can feel them onscreen, and sometimes the film achieves liftoff: in Hunter's first entrance, in the chattering gossip directly to the camera. In those early sequences, "Hot Summer Nights" pops with unpredictable energy. But once Daniel and Hunter start reaching out to drug dealers (the great William Fichtner as Shep, a coke dealer in Maine, is particularly frightening), getting themselves into hairy situations, it all becomes rote. We've seen it all before. Even the title is non descriptive. "Hot Summer Nights" could have used a little less "GoodFellas" and a lot more "The Outsiders." 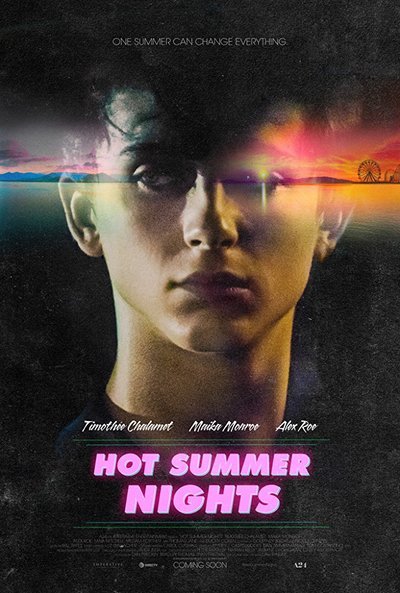 Rated NR for drug content and language throughout, sexual references, and some strong violence.