"Divergent" is all about identity—about searching your soul and determining who you are and how you fit in as you emerge from adolescence to adulthood. So it's all too appropriate that the film version of the wildly popular young adult novel struggles a bit to assert itself as it seeks to appeal to the widest possible audience.

It's the conundrum so many of these types of books face as they become pop-culture juggernauts and film franchises: which elements to keep to please the fervent fans and which to toss in the name of maintaining a lean, speedy narrative? The "Harry Potter" and "Hunger Games" movies—which "Divergent" resembles in myriad ways—were mostly successful in finding that balance.

In bringing the first novel of Veronica Roth's best-selling trilogy to the screen, director Neil Burger ("Limitless") and screenwriters Evan Daugherty and Vanessa Taylor have included key moments and images but tweaked others to streamline the mythology and move the story along. The results can be thrilling but the film as a whole feels simultaneously overlong and emotionally truncated.

Folks who've read the book will probably be satisfied with the results, while those unfamiliar with the source material may dismiss it as derivative and inferior. (Stop me if you think you've heard this one before: "Divergent" takes place in a rigidly structured, dystopian future where one extraordinary girl will serve either as its destroyer or its savior.) But the performances—namely from stars Shailene Woodley and Theo James and Kate Winslet in a juicy supporting role—always make the movie watchable and often quite engaging.

In the fenced-off remnants of a post-war Chicago 100 years from now, society has been broken down into five factions—groups of people arranged by a primary, defining trait. The Amity are happy, hippie farmers who dress in shades of sorbet. The Candor run the judicial system and value truth about all else. The Erudite are the serious-minded scholars who wear conservative, dark blue. The Abnegation are known for their selflessness and modesty. And the pierced-and-tatted Dauntless are the brave soldiers who protect the city from … who knows what? Whatever the perceived threat is, it requires them to run, scream and practice parkour wherever they go.

Woodley's Beatrice Prior is a member of the Abnegation alongside her brother, Caleb (Ansel Elgort), and their parents (Ashley Judd and Tony Goldwyn). They dress in drab colors, eat simply and are only allowed to steal a quick glance in the mirror once every three months when it's time for a haircut. Basically, they're no fun, and Beatrice has a wild streak in her that she's been forced to suppress.

When she undergoes the aptitude test required of all teens, which determines which faction is the best reflection of one's true nature, her results are inconclusive. She's got pieces of a few different places in her, which makes her what's known as Divergent, which makes her dangerous. Thinking for yourself is a naughty thing in this world, apparently; plus, the angsty inner conflict that rages within Beatrice is something to which the target audience for the book (and the movie) surely can relate.

At the annual Choosing Ceremony, where the teens use their test results to pick the faction they want to join for the rest of their lives—like the last night of sorority rush, mixed with the "Harry Potter" sorting hat—Beatrice dares to choose Dauntless. This means she can never see her family again. (Man, the rules are strict in dystopian futures.) But it also means she gets to train to unleash the bad-ass that's been lurking inside her all along.

Renaming herself Tris, our heroine must learn how to fight, shoot, jump from moving trains, throw knives and control her mind in a series of harrowing simulations, all while competing against a couple dozen other initiates in a demanding ranking system. Eric (a coolly intimidating Jai Courtney) is the merciless Dauntless leader who's taking the faction—which was founded on the notion of noble courage—in a more militant and vicious direction.

But the hunky trainer who goes by the name Four (James) is the one who will have a greater impact on the woman Tris will become. Quietly and generically brooding at first, James reveals more depth and shading to his conflicted character as the story's stakes increase. He and Woodley have an easy chemistry with each other, but the romance that took its time and smoldered on the page feels a bit rushed on the screen.

Similarly, the supporting figures who had identifiable personalities in the book mostly blend into the background here, including Tris' best friend, Christina (Zoe Kravitz). But it is extremely amusing to see Miles Teller, who played Woodley's first love last year in the wonderful "The Spectacular Now," serve as her enemy here as the conniving fellow initiate Peter. The smart-alecky Teller is also the only actor here who gets to have much fun. With the exception of a few major set pieces—the zip-line ride from the top of the John Hancock Center, for example—"Divergent" is a rather dark and heavy endeavor.

Woodley, though, by virtue of the sheer likability of her presence, keeps you hanging on, keeps you rooting for her. She may not have the blazing, rock-star power of Jennifer Lawrence as Katniss in "The Hunger Games," but there's a subtlety and a naturalism to her performance that make her very accessible and appealing. And when she needs to crank it up and kick some butt—as she does in a climactic scene with Winslet as the evil Erudite leader who's hell-bent on eradicating Divergents and maintaining control—she doesn't oversell it.

Plus, there could be worse role models for the eager adolescent audience than a young woman who's thoughtful, giving and strong—all at once. The inevitable sequel will show us what else she's got in her. 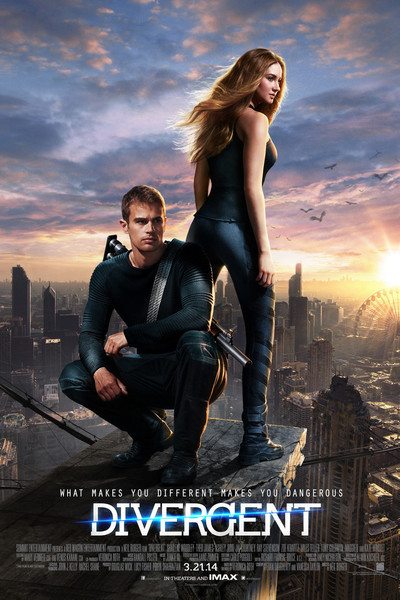 Shailene Woodley as Beatrice Prior / Tris

Ansel Elgort as Caleb Prior