20 years ago, Lois Lowry's dystopian YA novel "The Giver" won the Newberry Medal. Creepy and prophetic, told in a kind of flat-affect voice, it has been a staple in middle-school literature curriculum ever since, introducing young students to sophisticated ethical and moral concepts that will help them recognize its precedents when they come to read the works of George Orwell or Aldous Huxley. Jeff Bridges has been attached as a producer to the film project for almost 20 years, and finally, "The Giver" is here, with Bridges in the title role. Directed by Phillip Noyce, with an adaptation of the book by Michael Mitnick, "The Giver" gives us the overall structure of Lowry's original work, adds a couple of understandable details like a sweet little romance and then derails into an action movie in its final sequence, complete with attacks from the air and a hi-tech command center. Children have been thrilled by the book for 20 years, and a chase scene still proved irresistible. Despite a truly pained performance from Jeff Bridges and a beautifully imagined, three-dimensional futuristic world, "The Giver," in wanting to connect itself to more recent YA franchises, sacrifices subtlety, inference and power.

"The Giver" takes place in a community at some point in the indeterminate future where "Sameness" is prized above all else. Multiple factors have gone into creating a monochromatic world (literally, colors have been erased) where individuality is crushed, a citizen's every move is monitored from the moment of birth, natural families have been replaced by artificial "family units" and choice has vanished. A soothing voice makes passive-aggressive scolding announcements over loudspeakers. The Giver's cavernous dwelling, perched on the edge of a cliff, is a gloomy and masterful set, overlooking the clouds gathered below, making The Giver appear like Citizen Kane, holed up in his mansion surrounded by accumulated possessions and raw pain.


"Precision of language" is enforced, and so people are constantly apologizing and saying "I accept your apology" to each other, but in a rote way that drains the language of meaning. "The Giver" is a cautionary tale about what happens when language is controlled and limited—ground well covered for all time in "1984"—where citizens have no language available to them outside of "newsspeak." Memories are gone, too, in "The Giver". One person in the Community is chosen to be "The Receiver" of a collective memory, memories of now-extinct experiences like love and war and sex and pain. Through the course of the film, the young Jonas (Brenton Thwaites), chosen to be the next Receiver, is introduced to complexity and emotion and his entire concept of the world as he knows it shatters. He must now make a choice: to stay or to flee. It's a powerful set-up, made even more stark by Noyce's choice to film the majority of the film in black-and-white. When Jonas starts to see colors again, there are unavoidable "Pleasantville" connections.

Jonas is raised in a family unit, with Katie Holmes and Alexander Skarsgård acting as parental units. He has two best friends, Fiona (Odeya Rush) and Asher (Cameron Monaghan), and they are about to "graduate from childhood," and take on their assigned jobs in the community. There is a gigantic ceremony, led by the Chief Elder (Meryl Streep, who shows up as a holograph the size of a building), and each child is called to the stage to receive their assignments. The entire community gathers in a massive stadium, everyone dressed in identical white, so it looks like a gigantic celestial choir or a formal-dress LGAT workshop. Everyone speaks in unison. Everyone claps the same way. Everyone looks forward. No one moves. The effect is eerie.

Jonas is surprised when he is not assigned a job at all. He is, instead, "selected" to be the next Receiver, because he apparently has the ability to "see beyond." He has no idea what that means. Jeff Bridges, who becomes The Giver once a new Receiver is chosen, sits in the front row of the stadium, grim and remote. The thousands of people present start to chant in a repetitive whisper, "Jonas … Jonas … Jonas …"

The training sessions, when they come, are part Mr. Miyagi, part vision quest, and part "Quantum Leap." The Giver bombards Jonas with memories from all of humanity, memories that thrust Jonas into the thick of the action: he feels snow falling for the first time, he is shown the full spectrum of colors, he is given shaky-cam experiences of war, he also dances around a Maypole with a saucy wench while wearing a pirate shirt. There are multiple quick-shot montage sequences of smiling babies, praying Muslims, crashing waves, paper lanterns, crying elderly people. The music swells, pushing the emotions on us, but the montages have the opposite effect intended. Instead of revelatory glimpses of the rich tapestry of human experience, they seem like Hallmark-collages uploaded on YouTube. Noyce has also made the questionable choice to co-opt real-world events, and so suddenly we see Tieneman Square in the montage, or the Arab Spring, or Nelson Mandela. It's cheap, hoping to ride the coattails of others, as opposed to finding a visual form and style that will actually express the strength of the human spirit.

Jonas begins to look around him with new eyes. He wants to kiss Fiona. He wants to have the choice to feel things that may be unpleasant. He is not allowed to share his training with others.

The young actors in the film are pretty nondescript, the lead included, although Thwaites seems to come alive in mischievous ways when he starts to take care of a fussy newborn who can't stop crying at night. Holmes and Skarsgård are both strange and unplaceable, playing human beings whose emotions are entirely truncated. "Precision of language, please," says Mother at the dinner table when one of her children starts to speak. Bridges galumphs across the screen, a madman out of Melville, tormented, lonely, in and out of reality. His memories sometimes flatten him. There is one moment where he tells Jonas what the word is for the "feeling between people," and his eyes burn with pain and loss as he says, "Love. It's called love." It's the only powerful moment in the film. His emotion is so palpable it reaches off the screen and grips your throat.

The use of heavy explanatory voiceover to open and close the film is disappointing, especially since a couple of lines have been added to the famous last paragraph of the book. Not surprisingly, the lines added remove it from the moody ambiguous statement of hope that it is in the book, and turn it into a complete platitude. We've heard it a hundred times before. It emanates Sameness with every word. 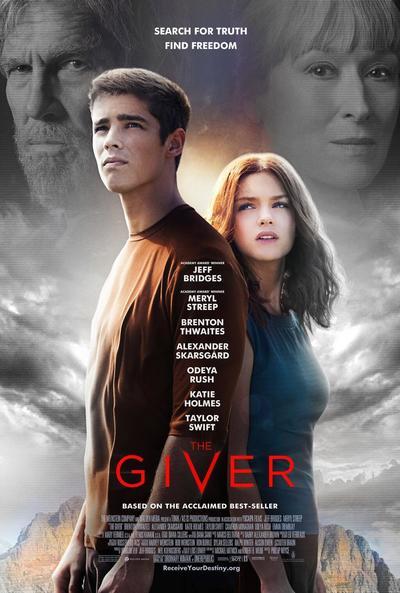 Jeff Bridges as The Giver