The charismatic stars of “The Hitman’s Bodyguard”—Ryan Reynolds shifting into lovable-loser gear as a down-graded protection agent for hire, Samuel L. Jackson in macho-and-mouthy mode as a profanely proficient deadly assassin and Salma Hayek as the sexy spitfire of a spouse who is devoted to him—all combust with masterful comic chemistry as they play off their well-established cinematic personas.

As for the high-speed vehicular stunts, they are breathless, relentless, endless—and a bit too numbingly generic.

Still, the main concept of lethal frenemies who must put aside their grudges for a common goal is a tried-and-true trope, as writer Tom O’Connor acknowledges with echoes of everything from “48 HRS.” and “Mr. and Mrs. Smith” to “Midnight Run” and “The Gauntlet.” But the real draw, much like Russell Crowe vs. Ryan Gosling in “The Nice Guys” and Kevin Hart vs. Dwayne Johnson in “Central Intelligence,” is the odd-couple matchup.

Hearty laughter does ensue as Reynolds’ cautious Michael Bryce is forced to keep Jackson’s reckless Darius Kincaid safe while transporting him from London to the Hague so he can testify against a genocidal Belarusian tyrant. As the villain, Gary Oldman—sadly, not exactly running on all thespian cylinders—recycles his Russian accent from “Air Force One” while his disfigured face appears to be coated in crusty bread crumbs. Luckily, the main dudes are on the ball as they race against the clock during their hazard-prone road trip while turning the art of bickering into a non-stop aria of foul-mouthed mutual belligerence and, eventually, reluctant respect.

When Bryce complains that Kincaid keeps putting him in harm’s way, Jackson goes full bellow: “I AM harm’s way. My job is to harm.” Of course, the bodyguard should know that since his passenger has attempted to take him down no less than 28 times over the years. There are in-jokes, such as when Bryce grouses that Kincaid “single-handedly ruined the word ‘motherfucker.'" There are also musical beats, as Kincaid insists on drunkenly singing a bluesy number to pass the time in the car, while Bryce counters by warbling a falsetto version of Ace of Base’s “I Saw the Sign.” And little did I think I would ever see Jackson gleefully harmonizing in a van filled with habit-wearing Italian nuns as if he were trying out for the Mother Superior in “The Sound of Music.”

That doesn’t even cover the contributions of Hayek, whose Sonia is being kept in a Dutch jail in order to guarantee Kincaid will provide evidence against Oldman’s baddie. It is a hoot to see the actress calmly strike yoga poses behind bars as she fiercely lashes out like a flame-thrower at any law official stupid enough to hassle her. Meanwhile, she intimidates her cellmate into standing in the corner. Maybe Hayek should book a guest appearance on “Orange is the New Black.” But one of the best scenes is a flashback showing how Kincaid met Sonia when she was a waitress at a Mexican bar, swooning over how she took care of hand-sy male customers by cutting them with broken beer bottles. The use of Lionel Richie’s “Hello” in the background adds a nice romantic touch.

Less successful is Bryce’s attempt to reunite with onetime squeeze Amelia (French import Elodie Yung), an Interpol agent whom he blames for getting a client of his shot. The flashback to their first lusty encounter at a funeral is cut short by the arrival of murderous thugs. But the actors can’t summon the same kind of heat generated by Jackson and Hayek, who calls her hubby “La Cucaracha,” since she says, “He’s un-killable.”

While no one is going to mistake “The Hitman’s Bodyguard” for high art, it will please those in the mood for late-summer fun. But why did I feel so emotionally depleted by the cartoony chaos unleashed in the name of entertainment by director Patrick Hughes ("The Expendables 3"), when the body count among the mostly anonymous victims of violence—often dispatched in the name of humor—began to balloon to astronomical proportions? The nearly constant annihilation of no-good-niks increasingly gnawed at me considering how much of the vehicular mayhem takes place in cities where terror attacks earlier this year were conducted on major urban thoroughfares—namely, London and Amsterdam. Nothing like real horrifying incidents to turn what was meant as a fantasy into a mirror—and that includes the tragic death in Charlottesville. There is also a streak of nasty sadism when Oldman’s meanest mercenary corners Bryce in a garage where he resorts to an ax, a hammer, and a metal chain used as a noose and, ultimately, a gun to vanquish his opponent. Cruel jokes too often become hollow jokes.

Besides, I believe when it comes to action thrillers beyond the realm of comic-books that older audiences—who lately are also the most loyal audiences in actual theaters—hunger for more thoughtful stories and compelling characters in the vein of “Hell or High Water” or “Wind River.” Even something as pop-fizzy as “Baby Driver” has a beating heart and a sense of moral purpose in its engine. At one point, Kincaid does bring up an existential conundrum: Who is in the most righteous profession? He who kills evil doers or he who protects those who commit evil? That is about as deep as this carnage-a-thon gets. 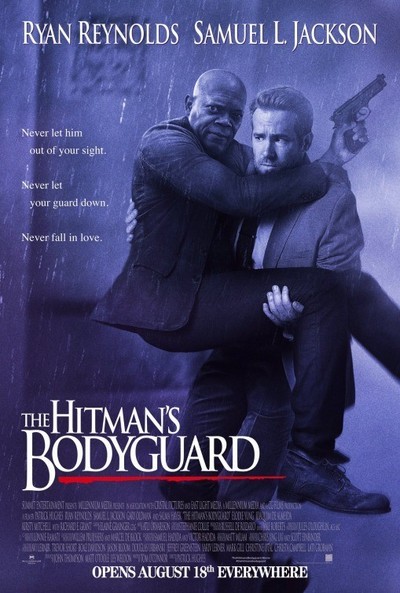