The film is a buddy action comedy in the vein of "The In-Laws" and "Midnight Run," with a splash of 1930s movie slapstick. Kevin Hart plays Calvin Joyner, a deadpan worrywart who was voted "Most Likely to Succeed" in high school. He has a good job and a charming wife but still feels like a failure. Dwayne Johnson plays his old high school classmate, Robert Weirdicht, aka Bob Stone, a bullied fat kid who grew up to become a muscular CIA agent but still wears a fanny pack and can't stop talking about "Sixteen Candles." Bob is six-foot-four and built like an action figure, which comes in handy in scenes that require him to do battle with a nunchacku-wielding assassin on a motorbike, or pirouette through a battle zone tossing tiny explosives from his fanny pack like Bugs Bunny as Brünnhilde strewing flower petals in her wake.

Bob says he just wants to hang out with Calvin, the only guy in high school who was ever nice to him, on the eve of their 20th high school reunion. He's secretly a renegade agent accused of killing his partner and committing treason, and he needs Calvin's accounting expertise to thwart a terrorist plot and clear his name. But his adoration of Calvin is sincere. He loves Calvin the way little kids love superheroes. Worships him. Adores him.

He tells Calvin he needs his help and asks if he's out or in. Calvin says he's not in. Bob says he's in, that he was always in. Calvin wants to know why Bob asked him if he was in or out if he was always in regardless. Bob says it's because he wanted to feel the pride and excitement of hearing Calvin tell him he's in. "I'm not in," Calvin says. He says this again and again, all through the movie: "I'm not in." He screams it while Bob is pushing him in a mail cart through a hail of gunfire and telling him to relax, everything's gonna be fine. This is their relationship.

And the best thing about this movie is that you believe in the relationship. Hart and Johnson are a classic comedy duo in the tradition of Abbott & Costello, Bob Hope & Bing Crosby and Gene Wilder & Richard Pryor. And they certainly have the silhouettes for it: when the two stand side-by-side, their height difference is so great that they become iconic: the genie and the man who summoned him.

But the film also takes them seriously as characters with dashed hopes and unrealized aspirations, men who feel things deeply even though they might not show it. They bicker, they yell at each other, and they get drawn into circuitous conversations about subjects that have little to do with the mission.

Bob is Calvin's id, lying to him and manipulating him to draw him into dangerous situations, but he's also his voice of conscience, urging him to act like the shining example of bravery and kindness that Bob always knew him to be. Johnson, who's become a fearless comic actor as well as a great action star, does the best work of his career as Bob. Calvin calls him "Jason Bourne in jorts," but despite the fact that Bob can kill a man with anything, even a banana, and has a mysteriously chilly (and chill) quality that makes Calvin wonder if those awful stories about him are true, he's a sweetie-pie—a Great Dane puppy bounding through the movie. Nobody in Hollywood has Johnson's aura of decency—he should have played Superman—and it's used ingeniously here, to allow us to like and even root for a man who is as innocently selfish as a child, a one-man wrecking crew demanding Calvin's full attention. "I'll never be like Molly Ringwald," Bob laments. He means it. And it's tearing him up inside.

Each man embodies the other's unfulfilled fantasies of "real" success; Bob is the bad-ass knight in shining armor that Calvin was told he was destined to become. Bob aspires to have a relationship as stable and nurturing as the one Calvin has with his onetime high school girlfriend-turned-wife, Maggie (Danielle Nicolet). Calvin thinks he's a little man, in every sense—a man of no importance—but Bob Stone would not exist without him. And yet Bob is still a scared kid inside, a truth conveyed in expressionistic scenes of humiliation that replay in reflected surfaces and even behind Bob's head (like a movie that Bob has literally turned his back on because he can't bear to watch).

Bob Stone is a magnificent comic creation, a man who exhorts his friend to be the hero of his own story because it worked for Bob, and who never stops searching the text of his world for bits of foreshadowing, for signs and symbols. But he wouldn't have the same impact if Calvin weren't there beside him, babbling in apprehension and improvising whopping lies while big men threaten to kill him. The two complete each other in an ungainly yet perfect way, like the centaurs that serve as the duo's high school mascot.

"Central Intelligence" is written by Ike Barinholtz, David Stassen and Rawson Marshall Thurber, and directed by Thurber, who also did "We're the Millers" and "Dodgeball," two of the better recent examples of the smart dumb comedy. It may not be a deep and complex masterpiece that will spawn symposiums and appreciations, but it is a classic of a very particular sort. It's the kind of movie that you watch on TV when you're supposed to be doing more important things, or experiencing more important movies, even though you've already seen it ten times, because it's still funny, and because you believe in the big man and the small man that he looks up to. 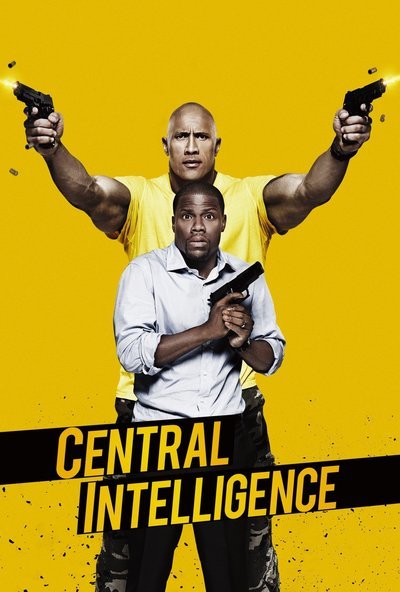