Taylor Sheridan’s films take place in a mythical version of the American West that doesn’t exist anymore, if it ever really did. It’s a place where there are no rules beyond the ones people invent for themselves to survive—stretches of Texas and New Mexico that are equal parts brutal and beautiful.

Sheridan previously explored this terrain as the writer of Denis Villeneuve’s “Sicario” and David Mackenzie’s “Hell or High Water,” the latter of which earned him an Oscar nomination for Best Original Screenplay. Now, he’s directing for only the second time as well as writing with “Wind River,” which feels very much of a piece with those two previous films, even as it distinguishes itself with a vivid sense of place.

“Wind River” is full of vast, scrubby expanses that give way to pristine blankets of white, interrupted only by a snowmobile slashing a solitary path. You can hear the crunch of snow and feel the bitter chill, which runs so deep that it can be deadly. Sheridan drops us in and we know this place immediately; his storytelling is meaty but efficient, and his pacing moves along at a steadily engrossing clip before ultimately exploding in a startling blast of violence.

A moody procedural, “Wind River” is heavy with symbolism from the start—perhaps, too much so. When we first see Jeremy Renner’s Cory Lambert, a tracker well-versed in the Wyoming wilds, he’s lying on his belly in the snow, camouflaged with his rifle, picking off wolves that have been preying on sheep. He’s a protector because it’s his job, but as we learn throughout the course of the film, that calling has become deeply personal.

There’s specificity to the way the characters talk, a poetry that can be quite moving or it can clang on the ear. But Sheridan’s script can be just as powerful in its quiet moments like these—in what the characters don’t say to each other.

On one of Cory’s hunting expeditions, he comes across the frozen body of a young woman; we’d seen her at the film’s start, frantically running barefoot in the middle of the night under a crisp, full moon. He recognizes her as Natalie (Kelsey Asbille), the best friend of his teenage daughter, who also died mysteriously a few years earlier.

Since the death occurred on the Wind River reservation—and Natalie, like Cory’s daughter, was Native American—the tribal police get involved in the investigation, led by the great Graham Greene as the dryly humorous, no-nonsense chief. But so, too, do the feds, in the form of newbie FBI agent Jane Banner (Elizabeth Olsen). She’s been sent from the Las Vegas office and is so ill-equipped for this place and this weather that she has to borrow snow gear—from the closet of Cory’s late daughter, which adds to the prevailing sense of grief.

“This isn’t the land of backup, Jane,” he says to her in explaining life on the reservation. “This is the land of: You’re on your own.”

And so as Cory works with Jane to unravel the mystery of what happened to Natalie in this remote, secretive land, he also must finally face what happened to his own child. (Cinematographer Ben Richardson, whose work includes the ravishing and dreamlike “Beasts of the Southern Wild,” helped create the richly atmospheric visuals.)

Sheridan handles the relationship between Jane and Cory deftly: They’re equals, but they also need and learn from each other. And while fellow Avengers Renner and Olsen have a natural, understated chemistry, Sheridan mercifully doesn’t throw their characters together in an awkward, needless romance.

Renner also has several powerful scenes with Gil Birmingham (who played a crucial supporting role in “Hell or High Water”) as Natalie’s grieving father, Martin. He’s all masculine stoicism and bitter swagger until he isn’t, and watching his proud veneer crumble is shattering.

At times, Sheridan has his characters spell out a little too clearly what they’re thinking and feeling, and that’s often the case in the exchanges between Cory and Martin. But the words are so beautiful and come from such a place of deep truth, it’s hard not to be moved, and they help give “Wind River” a simultaneous sense of timelessness and immediacy. 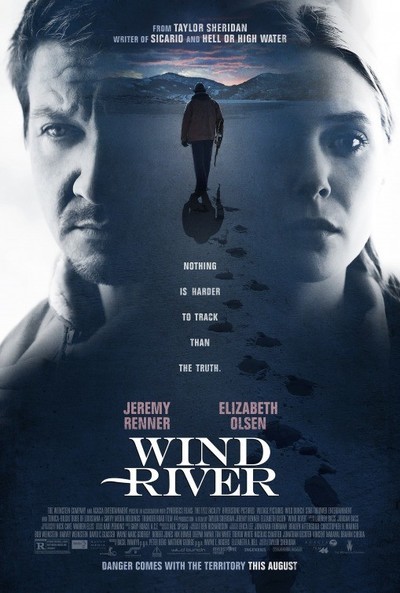