Baby is a young man who creates remixes of his life. He records conversations had around him (almost always around and not with him) on an old-fashioned mini-cassette recorder, and then mixes them into songs with some wonderfully antiquated keyboard and rhythm equipment. The first one we see him create is called “Was He Slow,” using a question asked by an accomplice about Baby’s mental capacity as a hook. Much like Baby turns the world around him into music, writer/director Edgar Wright remixes the movies and tunes that have influenced him into the wildly joyous and fantastically entertaining “Baby Driver.” As CGI robots clang into each other and superheroes take to the sky, here’s Wright to ask if you remember how movies used to thrill us with a turn of phrase, a squeal of a wheel, a diving plot twist, or a romantic kiss. “Baby Driver” feels both influenced by the modern era of self-aware, pop-culture filmmaking and charmingly old-fashioned at the same time, which is only one of its minor miracles. It’s as much fun as you’re going to have in a movie theater this year.

Yes, his name is “B-A-B-Y, Baby” (Ansel Elgort). At least, that’s the name he gives people when asked, although he’s more often ignored. He’s the nearly silent getaway driver for a robbery syndicate managed by Doc (Kevin Spacey), who organizes the crime, hires three criminals, and then puts them in Baby’s car. You see, Baby can drive. But he needs music to do it. After a car accident as a kid left him with tinnitus, he spends the vast majority of his waking hours with ear buds in his ears to drown out the ringing. And the world around him moves to the music on one of his many iPods—he has various ones for different moods. Sometimes the world seems to respond to his choice, sometimes his choice seems to influence the world around him—either way, music is as essential to the success of “Baby Driver” as it was to “La La Land,” maybe more.

Take the riveting first scene. Three criminals—Buddy (Jon Hamm), Darling (Eiza Gonzalez), and Griff (Jon Bernthal)—leap from a car outside of a bank just as Baby cues up “Bellbottoms” by The Jon Spencer Blues Explosion in his 'buds. Everything from this point on moves in rhythm with the music from the slamming of the car doors after the bank robbers return to the squealing tires of one of the best car chase scenes in years. We’ve seen countless action scenes scored to pop or rock songs, but how many have you seen in which the action works in unison with the music? And Wright takes this brilliant concept a step further, making even everyday normal activity feel like it’s part of Baby’s soundtrack. The sound of someone typing a text message on a phone or placing stacks of money on a table will work with the beat of a song, creating a film that has a rhythm, flow and structure from first frame to last that works in conjunction with its soundtrack. It’s fluid and jaw-dropping—the kind of thing you want to see immediately again after it’s over to catch all the things you missed.

The last paragraph probably makes “Baby Driver” sound like a music video, and has likely pushed out potential viewers looking for more substance than style. Trust me when I say that Wright doesn’t skimp on the former. There’s enough story and action here to satisfy without the music that drives the filmmaking. Much of the joy of this film is watching it unfold so I’ll be brief with plot. Baby had a brief dalliance with crime, and he made the mistake of robbing from Doc, who now forces him to drive as penance. He’s almost done. He has one more job for Doc and then he’ll be back to his normal life. Of course, we all know how that typically turns out in crime movies. And when Baby meets a lovely waitress named Debora (Lily James), he finds a reason to go straight. That’s all you need to know.

At its core, “Baby Driver” recalls decades of movies that anchored their narratives on criminals and the art of the car chase. There’s a remarkably old-fashioned sensibility to the way Wright structures and details his film, and it’s not just because his two genetically blessed stars look like they could have walked out of a 1940s noir (their All-American aesthetic is even more striking in a few gorgeous black-and-white shots that recall old Hollywood even more). “Baby Driver” is a high-concept film that never underwhelms detail, and it’s those charming little beats within the overall tune that hold it together.

It helps greatly that few people know how to assemble a cast like Edgar Wright. Elgort and James are engaging, charismatic leads with fantastic chemistry. Unlike most Hollywood action movies, the survival of the heroes here becomes something we actively root for instead of just know is likely to happen. The “villains” of the piece are perfectly cast and directed as well, particularly Spacey and Jamie Foxx as the menacing Bats. Both roles are written and cast in a way that they could have stolen focus with performances that play to the cheap seats but neither actor ever does. Foxx is particularly phenomenal in a role that’s both funny and filled with simmering danger. It’s one of those films where every single role, from the burly diner chef to the sweet post office employee, feels like it was cast with exactly the right person. It creates a sense of additional magic in a film when you can sense that every single element, even the most minor ones, is working exactly as its creator intended.

There’s an energy that you can feel in the theater when a movie is really working. It’s the guy next to you jumping a bit in his seat as a car takes a hard corner. It’s the woman behind you laughing extra hard at a joke. It’s the sense that everyone is fully engaged, almost tapping their feet to the rhythm of the film. I still believe this is why most people go to the movies with crowds of strangers—to feel that shared magic and nod their heads in unison to the cinematic tune. “Baby Driver” will be one of your favorite songs of the year. Listen to it with a crowd. And loud. 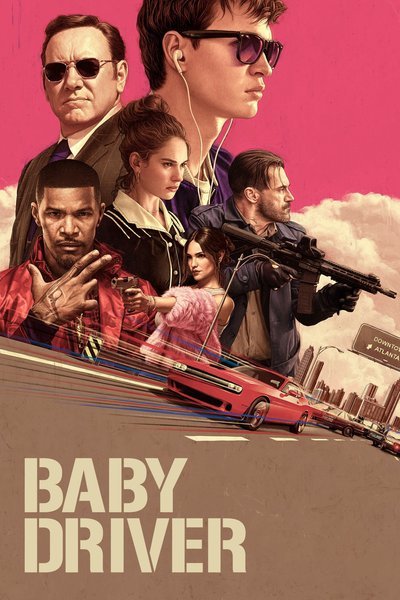