There’s a scene midway through Shane Black’s fun “The Nice Guys” in which Ryan Gosling’s truly mediocre private investigator has stumbled down a hill, drunkenly trying to impress a girl at a party. As he will do several times in the film, he literally falls into a clue, a rotting corpse of someone he’s been looking for. And what does Gosling do when he comes face to face with it? He doesn’t respond in the typically nonchalant movie star way. No, he digs much deeper into the comedy movie bag of tricks and pulls out, of all things, a Lou Costello impression—that wonderful, silent scream the actor would do when he saw something like the Wolfman. It is a truly hysterical moment, one of several bits of physical comedy that Gosling pulls off throughout “The Nice Guys.” Combined with the excellent straight man work by Russell Crowe, the two actors become a surprisingly brilliant comedy duo, carrying “The Nice Guys” past a few flat jokes, needed edits and a cluttered finale.

“The Nice Guys” is a dark comedy that takes place in a time in which Kennedy is dead, poverty is on the rise, corruption is rampant, the Hollywood sign is falling down and porn is as successful as the auto industry (I love the parallel party sequences, one celebrating adult film and one celebrating car manufacturers ... they look nearly identical other than the degree of nudity). It’s really about people trying to keep their heads above rising waters, and what it takes to maintain some semblance of decency in an increasingly indecent world. And yet Black is smart enough to not make his leading men into saints. Healy is a blunt instrument, a man who gets the job done and gets out, but he’s also got a sense of what he should and should not do for a paying client. He'll break your arm, but he's breaking your arm for a reason. March is an alcoholic without much desire to fix that particular problem today; there are more pressing ones. One of the operating beliefs of the film could be summed up when Healy says heroically, “We’re gonna hunt down the people who did it,” and March chimes in with a perfectly timed, “for a deeply discounted rate.” Everybody in this cesspool of a city gets a cut, even the good guys, as  set in a time period when a 13-year-old can be the only remaining, decent voice of reason.

The cast is perfect, but “The Nice Guys” could have used one more rewrite or two and another trip to the editing bay to really streamline jokes that don’t work and a plot that gets more cluttered than engaging. It’s not until an actual villain (Matt Bomer) shows up more than an hour into the piece that you realize that the movie didn’t have one before then (although one could argue the entire city of L.A. is the bad guy). And some of the bits get repetitive before the movie’s over. We know that Holly is the brains, Healy is the brawn and March is the bumbling hero that ties them together before this trio figures it out for themselves, and I wish the film had another surprise up its sleeve, a narrative turn that felt fresher than the inevitable Shane Black Shootout waiting in the climax.

Having said that, what I think people will underrate the most about “The Nice Guys” is the choreography of the entire piece. Without spoiling specific details, the final sequence features Gosling chasing something and falling on car hoods, into windshields, and over his own two feet. He’s far from the suave hero you’ll see in a dozen other summer blockbusters this year. And Gosling completely sells it, as he does throughout the entire film. He may not be the hero that L.A. needs in the '70s, but he's the hero that L.A.'s got in the '70s. And it’s his gift for slapstick, combined with his fantastic chemistry with Crowe, that makes these "Nice Guys” worth a look. Unlike most comedies in recent memory, I'd gladly watch another adventure with these three characters front and center. Maybe they'll finally catch a break. 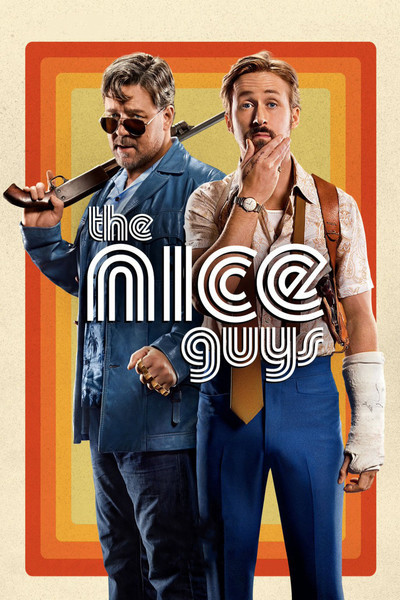