A Q only in Quantum

OK, I'll say it. Never again. Don't ever let this happen again to James Bond. "Quantum of Solace" is his 22nd film and he will survive it, but for the 23rd it is necessary to go back to the drawing board and redesign from the ground up. Please understand: James Bond is not an action hero! He is too good for that. He is an attitude. Violence for him is an annoyance. He exists for the foreplay and the cigarette. He rarely encounters a truly evil villain. More often a comic opera buffoon with hired goons in matching jump suits.

"Quantum of Solace" has the worst title in the series save for "Never Say Never Again," words that could have been used by Kent after King Lear utters the saddest line in all of Shakespeare: "Never! Never! Never! Never! Never!" The movie opens with Bond involved in a reckless car chase on the tollway that leads through mountain tunnels from Nice through Monte Carlo and down to Portofino in Italy, where Edward Lear lies at rest with his cat, Old Foss. I have driven that way many a time. It is a breathtaking drive.

You won't find that out here. The chase, with Bond under constant machinegun fire, is so quickly cut and so obviously composed of incomprehensible CGI that we're essentially looking at bright colors bouncing off each other, intercut with Bond at the wheel and POV shots of approaching monster trucks. Let's all think together. When has an action hero ever, even once, been killed by machinegun fire, no matter how many hundreds of rounds? The hit men should simply reject them and say, "No can do, Boss. They never work in this kind of movie."

The chase has no connection to the rest of plot, which is routine for Bond, but it's about the movie's last bow to tradition. In "Quantum of Solace" he will share no cozy quality time with the Bond girl (Olga Kurylenko). We fondly remember the immortal names of Pussy Galore, Xenia Onatopp and Plenty O'Toole, who I have always suspected was a drag queen. In this film, who do we get? Are you ready for this? Camille. That's it. Camille. Not even Camille Squeal. Or Cammy Miami. Or Miss O'Toole's friend Cam Shaft.

Daniel Craig remains a splendid Bond, one of the best. He is handsome, agile, muscular, dangerous. Everything but talkative. I didn't count, but I think M (Judi Dench) has more dialogue than 007. Bond doesn't look like the urge to peel Camille has even entered his mind. He blows up a hotel in the middle of a vast, barren, endless Bolivian desert. It's a luxury hotel, with angular W Hotel-style minimalist room furniture you might cut your legs on, and a bartender who will stir or shake you any drink, but James has become a regular bloke who orders lager. Who are the clients at this highest of high-end hotels? Lawrence of Arabia, obviously, and millionaires who hate green growing things. Conveniently, when the hotel blows up, the filmmakers don't have to contend with adjacent buildings, traffic, pedestrians, skylines or anything else. Talk about your blue screen. Nothing better than the azure desert sky.

Why is he in Bolivia? In pursuit of a global villain, whose name is not Goldfinger, Scaramanga, Drax or Le Chiffre, but ... Dominic Greene (Mathieu Amalric). What is Dominic's demented scheme to control the globe? As a start, the fiend desires to corner the water supply of ... Bolivia. Ohooo! Nooo! This twisted design, revealed to Bond after at least an hour of death-defying action, reminds me of the famous laboratory mouse who was introduced into a labyrinth. After fighting his way for days through baffling corridors and down dead ends, finally, finally, parched and starving, the little creature crawled at last to the training button and hurled his tiny body against it. And what rolled down the chute as his reward? A licorice gum ball.

Dominic Greene lacks a headquarters on the moon, or on the floor of the sea. He operates out of an ordinary shipping warehouse with loading docks. His evil transport is provided by fork lifts and pickup trucks. Bond doesn't have to creep out on the ledge of an underground volcano to spy on him. He just walks up to the chain-link fence and peers through. Greene could get useful security tips from Wal-Mart.

There is no Q in "Quantum of Solace," except in the title. No Miss Moneypenny at all. M now has a male secretary. That Judi Dench, what a fox. Bond doesn't even size her up. He learned his lesson with Plenty. This Bond, he doesn't bring much to the party. Daniel Craig can play suave and he can be funny and Brits are born doing double entendre. Craig is a fine actor. Here they lock him down. I repeat: James Bond is not an action hero! Leave the action to your Jason Bournes. This is a swampy old world. The deeper we sink in, the more we need James Bond to stand above it. 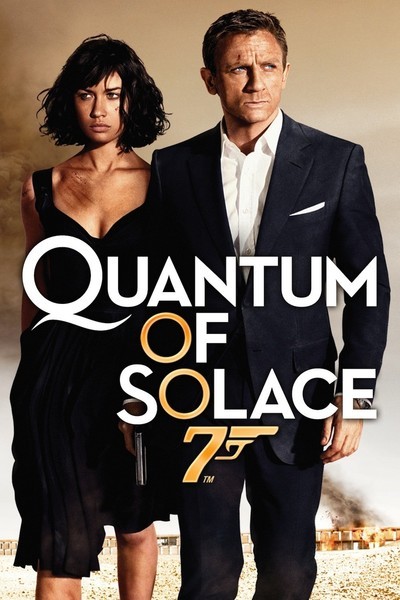