A world slanted at sharp angles

The first thing everyone notices and best remembers about "The Cabinet of Dr. Caligari" (1920) is the film's bizarre look. The actors inhabit a jagged landscape of sharp angles and tilted walls and windows, staircases climbing crazy diagonals, trees with spiky leaves, grass that looks like knives. These radical distortions immediately set the film apart from all earlier ones, which were based on the camera's innate tendency to record reality.

The stylized sets, obviously two-dimensional, must have been a lot less expensive than realistic sets and locations, but I doubt that's why the director, Robert Wiene, wanted them. He is making a film of delusions and deceptive appearances, about madmen and murder, and his characters exist at right angles to reality. None of them can quite be believed, nor can they believe one another.

The film opens in the German town of Holstenwall, seen in a drawing as houses like shrieks climbing a steep hill. After a prologue, a story is told: A sideshow operator named Caligari (Werner Krauss) arrives at the fair to exhibit the Somnambulist, a man he claims has been sleeping since his birth 23 years ago. This figure, named Cesare (Conrad Veidt), sleeps in a coffin and is hand-fed by the crazed-looking doctor, who claims he can answer any question.

The hero, Francis (Frederich Feher), visits the show with his friend Alan (Hans Heinz von Twardowski), who boldly asks, "When will I die?" The reply is chilling: "At first dawn!" At dawn Alan is dead. Suspicion falls on Cesare. Francis keeps watch all night through a window as Caligari sleeps next to the closed coffin. But the next morning, his fiancee, Jane (Lil Dagover), has been abducted. Does that clear the doctor and the Somnambulist from suspicion?

In itself, this is not a startling plot. The film's design transforms it into something very weird, especially as Cesare is seen carrying the unconscious Jane and is pursued by a mob. The chase carries them through streets of stark lights and shadows and up a zigzagging mountain trail. Caligari, meanwhile, is followed by Francis as he returns to where he apparently lives -- the insane asylum, where he is the ... director! Evidence is discovered by Francis and the local police that Caligari, influenced by an occult medieval manuscript, yearned to find a somnambulist and place him under a hypnotic spell, subjecting him to his will.

A case can be made that "Caligari" was the first true horror film. There had been earlier ghost stories and the eerie serial "Fantomas" made in 1913-14, but their characters were inhabiting a recognizable world. "Caligari" creates a mindscape, a subjective psychological fantasy. In this world, unspeakable horror becomes possible.

"Caligari" is said to be the first example in cinema of German Expressionism, a visual style in which not only the characters but the world itself is out of joint. I don't know of another film that used its extreme distortions and discordant angles, but its over-all attitude certainly cleared the way for "The Golem," "Nosferatu," "Metropolis" and "M." In one of the best-known books ever written about film, From Caligari to Hitler, the art historian Siegfried Kracauer argued that the rise of Nazism was foretold by the preceding years of German films, which reflected a world at wrong angles and lost values. In this reading, Caligari was Hitler and the German people were sleepwalkers under his spell.

I don't believe the films caused Nazism in Germany, and whether they predicted it depends a great deal on hindsight. What is certain is that the Expressionist horror films created the most durable and bulletproof of genres. No other genre has box-office appeal all by itself, although film noir, also deeply influenced by Expressionism, comes close. All a horror film need promise is horror -- the unspeakable, the terrifying, the merciless, the lurching monstrous figure of destruction. It needs no stars, only basic production values, just the ability to promise horror.

The 1920s were the decade that saw the rise of the Dada and Surrealist movements. The first rejected all pretense, all standards, all sincerity. It was a profound expression of hopelessness and alienation. It led to the rise of the related art movement Surrealism, which cut loose from order and propriety, rejected common values, scorned tradition and sought to overthrow society with anarchy. It's said such movements were a reaction to the horror of World War I, which upset decades of relative tranquility and order, threw the European nations into unstable new relationships and presented the inhuman spectacle of modern mechanized battle. After the brutality of trench warfare, it would be difficult to return to landscapes and still life.

"The Cabinet of Dr. Caligari" as a viewing experience must have been unsettling to the audiences of 1920. The original Variety review, which cheerfully reveals the ending, tries in its stilted wording to express enthusiasm: "This has resulted in a series of actions so perfectly dovetailed as to carry the story through at a perfect tempo. Robert Wiene has made perfect use of settings designed by Hermann Warm, Walter Reimann and Walter Roehrig, settings that squeeze and turn and adjust the eye and through the eye the mentality."

Although the prose suggests chiropractic, I imagine some viewers indeed felt squeezed, turned and adjusted by the images. The film today still casts its spell. I viewed the version on a DVD from Kino, which (unusually with silent films of its vintage) includes all the original footage. The film has not been digitally restored to remove all flaws, but in a way those that remain --spots, blemishes -- add to the effect. You feel as if you're watching an old record of an old story, which includes within itself an even older one. The original film was tinted, so there are no purely black-and-white scenes, only those mostly in shades of reddish-brown and slate blue.

Wiene is fond of the iris shot, which opens or closes upon a scene like an eye. This makes the point that we are looking and are privileged to witness events closed to other people. He also sparingly uses a device of superimposing words on the image to show Alan feeling surrounded by voices. Wiene's closeups lean heavily on Caligari's fierce and sinister scowl, the dewy innocence of Jane, and the wide-eyed determination of Alan. The Somnambulist is not very expressive -- he certainly lacks the charisma of Frankenstein's monster, who in a way he inspired -- and is most often seen in long shot, as if the camera considers him an object, not a person.

The sets are presented, as they must be, in mostly longer shots, establishing their spiky and ragged points and edges. The visual environment plays like a wilderness of blades; the effect is to deny the characters any place of safety or rest. It isn't surprising that the "Caligari" set design inspired so few other films, although its camera angles, lighting and drama can clearly be seen throughout film noir, for example in the visual style of "The Third Man" (1949).

Robert Wiene (1873-1938) began his career in 1913 and directed 47 films, including "Raskolnikow," based onCrime and Punishment,and the famous "The Hands of Orlac" (1924). He fled the rise of Hitler and at the time of his death was working on "Ultimatum" (1938), with another refugee, Erich von Stroheim. Conrad Veidt (1893-1943), another refugee, made 119 films and was a major star of the time, whose credits included the great "The Man Who Laughs" (1928) and of course "Casablanca"(1942), where he played Major Strasser, who met an unexpected end at the airport. (All three titles are also in my Great Movies Collection.)

Note:"Caligari" is part of Kino's excellent German Expressionism set and is available separately. 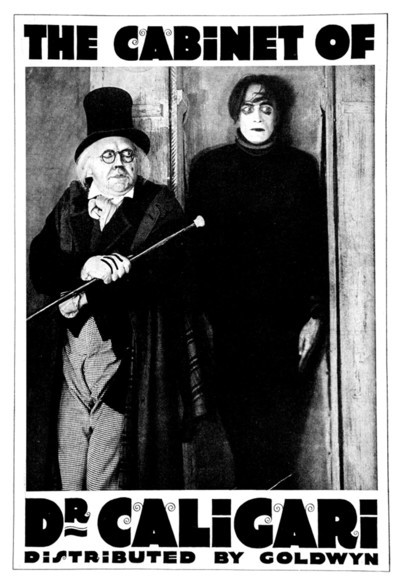