The plot pits the Enterprise crew against an intergalactic terrorist named John Harrison (Benedict Cumberbatch, giving his honeyed baritone a workout), who’s waging war on the Federation for mysterious personal reasons. There’s a joke, an argument, a chase, a spaceship battle, or a brutal close-quarters firefight every five minutes, but all the action is intimately tied to character. The major players, particularly Chris Pine’s James T. Kirk and Zachary Quinto’s Mr. Spock, are as finely shaded as the incarnations played by William Shatner and Leonard Nimoy. This new voyage of the starship Enterprise is brash, confident, and often brutally violent, and features the most lived-in production design I’ve seen in a Hollywood sci-fi blockbuster since "Minority Report."

Why, then, is the film ultimately disappointing? I suspect it’s the pop culture echo chamber effect: Abrams and his screenwriters (Robert Orci, Alex Kurtzman and Damon Lindelof) are so obsessed with acknowledging and then futzing around with what we already know about Kirk, Spock, McCoy, Uhura, Scotty and company that the movie doesn’t breathe. "Star Trek Into Darkness" is peppered with nods to past films and episodes: Kirk’s impetuous decision-making and horndog sexual proclivities; Spock’s denial of his half-humanness; Dr. McCoy’s cranky witticisms; Scotty’s protestations of what he and the ship “canna” do; references to tribbles and neutral zones and the Harry Mudd incident. The central plotline refers to one of Trek’s most celebrated storylines — a callback that alternately seems to honor the original, then turn it on its head, then honor it again. The final act includes an homage to one of the most famous scenes in the entire Trek canon — but this, too, is an inversion, or appears to be, until the script springs another whiplash reversal.

The story starts with a "Raiders of the Lost Ark"-like action sequence: Kirk, Spock and the gang are embroiled in a secret mission on a red jungle planet filled with superstitious tribespeople whose lives are threatened by a volcanic eruption. The correct thing to do is leave Mr. Spock behind, because going back to rescue him would violate the Federation’s Prime Directive against messing with the natural development of primitive cultures. It’s in this opening sequence, for better or worse, that the movie establishes a vexing narrative pattern: The characters have urgently necessary arguments about the morally, ethically, and procedurally correct thing to do in a crisis, then one character (usually Kirk) makes a unilateral, straight-from-the-gut decision that worsens everything; and yet somehow at the end he’s rewarded, or at least not seriously punished.

We’re given to understand that it’s always a good thing to prize personal friendship and loyalty above the concerns of one’s crew, ship, federation or species. Sometimes the reward is quite deliberate — as in the end scene, which finds Kirk being celebrated as a hero after making what looked to me like a series of catastrophic rookie mistakes that ended dozens of lives. Other times it’s as if the cosmos itself is rewarding or at least protecting Kirk, as when he loses command of the Enterprise for his behavior on the primitive planet, then gets it back thanks to another sudden plot twist. A good alternate title for this movie would be the name of one of Steven Soderbergh’s great books about filmmaking: "Getting Away With It: Or, the Further Adventures of the Luckiest Bastard You Ever Saw." The Federation itself seems to have plenty in common with Kirk: Both the opening mission and a subsequent intergalactic act of aggression are presented as having grave consequences if they fail, then the film just sort of writes them off with a shrug, as if to say, “Well, that’s all in the past, and as long as it doesn’t happen again, no harm, no foul.” (Has anyone in the Federation actually honored the Prime Directive?)

Yes, the film’s stumblebum plotting comes from a desire to give the audience what it wants: Kirk in command, flying by the seat of his tight pants; Spock learning it’s OK to acknowledge and act on his emotions, and that there’s more to life than following rules; etc. But surely there were more elegant ways to get us there! Abrams makes the 23rd century look like a place of actions and consequences, in which humans and other creatures might actually live, think and feel, in a world in which a fall of more than ten feet could break a leg, lava can melt flesh, and people who are dead stay dead. But he also tells stories in which various practices, rules and laws, including Starfleet tactical procedures, the Prime Directive, and gravity, have no narrative weight. Too much of "Star Trek Into Darkness" has what I call a “playground storytelling” sensibility: “Lie down, you’re dead. Never mind, you’re alive again — now fight!” This narrative flailing-about isn’t merely amateurish, it’s at odds with the gritty production design and pseudo-documentary camerawork and references to 9/11 and the War on Terror. It takes a great artist to be both serious and silly. Abrams, for all his enthusiasm, ain’t it.

For all its sloppiness and blind spots and fanboy pirouettes, though, "Star Trek Into Darkness" is still an involving film with more heart than most summer blockbusters. Abrams’ roots in TV (Felicity, Alias, Lost) seem to have made him attentive to the dynamics of groups, and to the repeated phrases and gestures that bond viewers to characters. Pine’s beefy frat-boy Kirk is appealing, especially when he’s being called on the carpet; Pine has several strong scenes opposite Cumberbatch’s Harrison and Bruce Greenwood’s mentor-father figure, Capt. Pike, in which Pine is overmatched as both character and actor but uses the imbalance to enhance the scene. Sometimes you see terror in Kirk’s eyes as he blusters; his vulnerability makes you root for him even though his “I gotta be me!” philosophy destroys careers and ends lives.

Quinto’s Spock is equal to, but different than, Leonard Nimoy’s incarnation, and it’s a relief to see that Abrams has made the destruction of Vulcan in the first film a key component of the character’s psychology. As Spock explains to communications officer Uhura (Zoe Saldana), his main squeeze, it’s not that he can’t feel any emotion, it’s that he’s decided he’s better off not feeling it: this Spock is a Holocaust survivor who has adopted numbness as a survival strategy. Uhura, Simon Pegg’s Scotty, John Cho’s Sulu, Anton Yelchin’s Chekov, and Karl Urban’s “Bones” McCoy have their moments, too; they behave like plausibly real people even when the script is asking them to do and say things that common sense tells us is horse manure, and their presences lend the film a dignity it doesn’t earn.

* Edited 6/22/18 to remove a reference to a "forthcoming" detailed blog post on the film that the reviewer ended up not writing. 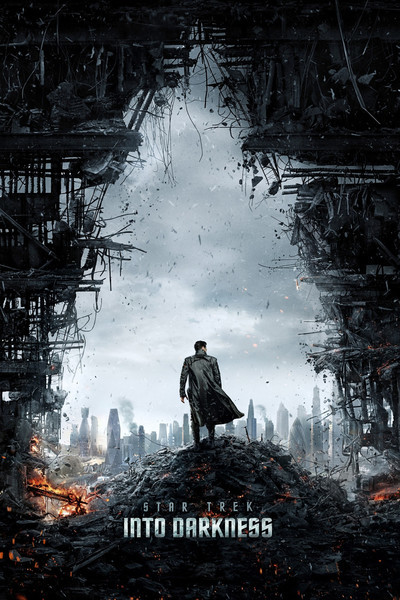