Thanks to the enormous success of such films as “Wonder Woman” and the recent entries in the “Star Wars” franchise, Hollywood seems to at long last be learning that big-scale genre films can be centered on female characters and still do exceedingly well at the box office. The immediate effects of this belated realization—ranging from the increasingly impotent whining from fragile fanboys threatened by such developments, to Marvel finally moving forward with a long-overdue Black Widow standalone feature—have been salutary, to be sure. With any luck, however, perhaps this recent discovery that, to quote Danny Trejo in “Anchorman,” “Ladies can do stuff now,” will finally inspire the industry as a whole to get off its collective duff and at long last give Gina Carano something worthy to do.

Carano, you will recall, was the former mixed martial artist whom Steven Soderbergh picked to star in his quirky 2011 thriller “Haywire.” Admittedly, she was not exactly the most polished actress imaginable but her palpable screen charisma helped her hold her own against the likes of Michael Fassbender, Antonio Banderas, Ewan McGregor and Michael Douglas in the dramatic scenes, and her undeniable physical presence allowed her to utterly dominate the more action-heavy elements. It seemed as if a star had been born but the industry didn’t quite seem to know what to do with her. Instead of becoming the female equivalent of Dwayne “The Rock” Johnson, her subsequent film career saw her either get lost in the shuffle in the large-scale likes of “Fast & Furious 6” and “Deadpool” or in instantly forgettable VOD fodder that make equally little use of her talents.

You do not need to be much of a student of the cinematic arts to figure out which category her latest film, “Scorched Earth,” fits into. This is a cheap and uninspired hybrid of the post-apocalyptic action thriller and Western genres that feels like it could have been made a quarter-century ago without any significant difference in the end product. This one is set in a not-too-distant future where Earth has been nearly destroyed by global warming and the few survivors struggle to make a new life in a world where water filters and powdered silver (used for the needed air filters) are the most valuable of commodities. Carano plays Atticus Gage, a bad-ass bounty hunter who tracks down “eco-criminals” guilty of crimes such as driving the few remaining gas-guzzlers. One day, Atticus learns of a compound filled to the brim with criminal types and led by the power-hungry Thomas Jackson (Ryan Robbins), all of whom each have huge bounties on them. Thanks to a vague resemblance to a notorious criminal type that she has just killed, Atticus hits upon a plan to gain entrance to the compound, gain Jackson’s trust and then take him down for the reward. This mission starts off easily enough but is soon complicated by the suspicions of Jackson’s right-hand man (Dean S. Jagger) and the presence of Jackson’s girlfriend (Stephanie Bennett), who reminds Atticus of her own sister, whom she lost years ago when she was kidnapped by ... ah, you’ll figure it out.

The end result is pretty much what you might expect—a work so desultory that you wonder how all involved managed to work up the energy and enthusiasm to make it to the set each day. It is hard to decide what is more threadbare—the screenplay that consists entirely of elements lifted wholesale from other and better films or the sets that are so tacky-looking that even Roger Corman might have suggested a modest upgrade in cost and quality. If forced to choose, I would have to go with the former because there is not a single flash of inspiration to be had from writers Kevin Leeson and Bobby Mort, whose combined credits run the gamut from “Mongolian Death Worm” to “The Colbert Report.” Take the bad guy—the singular element that most films of this sort live or die upon. Here, our villain is as resolutely non-menacing as can be—he claims to be inspired by the example of Simon Bolivar but more closely recalls a lower-rent version of the bad guy from that other redoubtable post-apocalyptic/Western hybrid, “The Postman.” As for the action beats, they are about as gripping and exciting as one might expect when entrusting a film of this type to the like of Peter Howitt, the auteur of such white-knuckle cinema as “Sliding Doors,” “AntiTrust” and “Johnny English.”

As for Carano, she is, inevitably, the only interesting thing about “Scorched Earth.” But not even her efforts amount to much in the end—how much difference can one person with their star presence and physical skills make in the service of a screenplay, director and supporting cast that fail to make any real use of them? Watching her is fun for a little bit, but seeing her talents thoroughly wasted becomes more depressing than anything else. 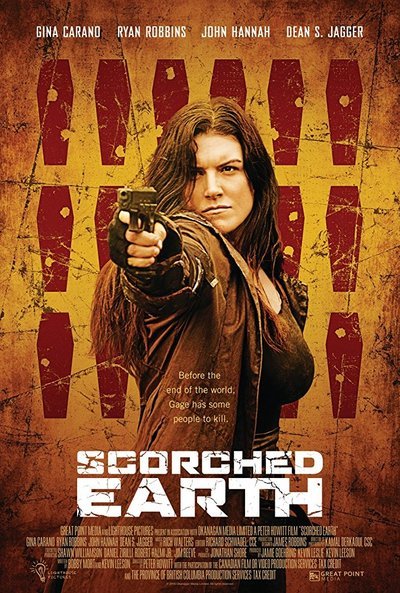