Muscleheads and muscle car fanatics deserve their own "Star Wars" or "Star Trek," I guess, and the Fast and the Furious movies seem to fit the bill. Just like those perennial sci-fi geekouts, this saga about super-heroic street racers is essentially about friendship. All the fancy nomenclature and delirious spectacle are just to help render the essential stuff in ways that won’t embarrass a juvenile audience. It works. I don’t think my 10-year-old self could have tolerated Han Solo and Princess Leia kissing at the end of "Return of the Jedi" if not for the consolation of watching the Vietnam War re-enacted by miniature space bears.

So it is with "Fast & Furious 6," which is arguably the most sentimental of the "Fast" flicks. The regular cast members are all either approaching 40 or well into their forties. When this series started 12 years ago, they were still hot young Hollywood upstarts. Whoever was a teen or tween back then, finding in these photogenic badasses the epitome of cool, is now likely sweating over rent and taxes. "Fast 6" wants to give them a little commencement present akin to "Star Trek VI," which actually put a lump in my throat when it ended by having the TV icons of my youth sign their names across the stars. Yet, "Fast 6" is still cold-blooded and brutal enough for the children.

A kind of name-in-the-stars paean happens in the opening credits, a montage of moments from all over the series. We glimpse Paul Walker and Vin Diesel in the early days, slightly slimmer, swifter and lighter of voice. We see various beatdowns, jiggling bikinis and vehicular massacres set to the thump of a generic hip-hop track. Justin Lin is a playfully bombastic director, but his wise-ass sensibility goes missing in one of the key areas where he could leverage this trash into trash art: the soundtrack. I tuned out the title music and imagined Ray Charles and Norah Jones softly crooning “Here We Go Again” over the running, squalling, ass-slapping and killing. This time around, the members of this street-racing, carjacking gang-turned-A-Team come out of retirement to help an international counter-terrorism manhunt. They’re all millionaires living in far-flung tropical hideaways now, so what could convince them to help the feds?

One of their homies thought long dead has been photographed among the suspects. Letty (Michelle Rodriguez) is alive, apparently. She was Vin Diesel’s girlfriend in "Fast" One and Four; in the latter, she was presumed killed by a drug lord’s henchman. When Letty finally showed up alive onscreen, there were gasps and murmurs among my fellow moviegoers. Now, that’s what I’m talking about! A long-running franchise like this one is about the familiarity and comfort of friendship. It’s about disappearances, intervals of grief and longing, entrances, exits and grand reunions. If anybody loves this ridiculous cycle of crime operas, it’s because they love things like Rodriguez’s scowl, which is ten times prettier than her smile (which is pretty damn pretty itself). They love Vin Diesel’s marble-mouthed charisma and Paul Walker’s earnest aqua blue eyes (framed, in the film’s most spectacular shot, between fire engine-red prison bars). They love the horribly written but charmingly performed banter between sidemen Chris “Ludacris” Bridges and Tyrese Gibson. They love the shy, sweet courtship between Han (Sung Kang) and Gisele (Gal Gadot). They love the way these show-offs talk shit with each other and initiate relative newcomers like Dwayne Johnson (a.k.a. The Rock) and first-timer Gina Carano ("Haywire") into their shit-talking fold. They love these raggedly human things, and it’s the filmmaker’s job to withhold them at times to force viewers to face the possibility that they might never enjoy them again, then bring them back from the narrative dead with an invigorating flourish.

Vittorio De Sica would have aced one of these flicks. Every action director should study the way a father almost loses a son in De Sica’s "The Bicycle Thief" and an old man almost loses a dog in his "Umberto D": Heartstopping, and then heartbreaking. A recent Hollywood example is the tearful meeting of donut-eating flatfoot Al Powell and battered New York cop John McClane at the end of "Die Hard," after they’ve bonded all night over police radio. Luc Besson’s classics "La Femme Nikita" and "The Professional" bet everything on giant matching close-ups, late in the game, of two people desperately in love, facing each other for what could be the last time.

Violence is boring. The great action movies are about life and the scramble to preserve it, no matter how or who or what threatens to take it away. (In this case, the who is a moustache-twirler played by Welshman Luke Evans, looking like the evilest parts of Jude Law and Leonardo DiCaprio mashed up.) Modern action movies focus so much on the scramble — pornographically so — that they forget the life part. The real trick is to fuse the life and the scramble in each moment. In "The General," Keaton’s every beautifully human move to save himself tells us exactly why he’s worth saving.

Squarely state-of-the-art, "Fast 6" is not a great action movie. It has all the ingredients, including a cast that flaunts infectious group chemistry, but its delivery is so businesslike and its action sequences so preoccupied with numbing shock-and-awe tactics (despite Keaton/Jackie Chan levels of absurd invention) that we forget to care. Until "Fast 6," I never imagined a tank speeding the wrong way down a highway could give me that Benadryl feeling. The second most thrilling scene in the film is a Rock/Diesel tag team wrestling move that drew (intentional) laughter and applause from the audience. But it's trumped by a more sedate moment: a family barbecue that brings the principal cast together for a corny prayer. It looks like these former street punks are growing up into a real family, not the conditional, treacherous kind that a street gang provides. Right on on that scene’s heels comes a cliffhanger burst of violence surely conceived to please the kids — the ones movie executives can’t imagine sitting still for anything less than murder. "Fast 6" is solid entertainment, but it might have been great if it recognized that a human touch is a rare thing, and when you have it, there's no need to keep clenching it into a fist. 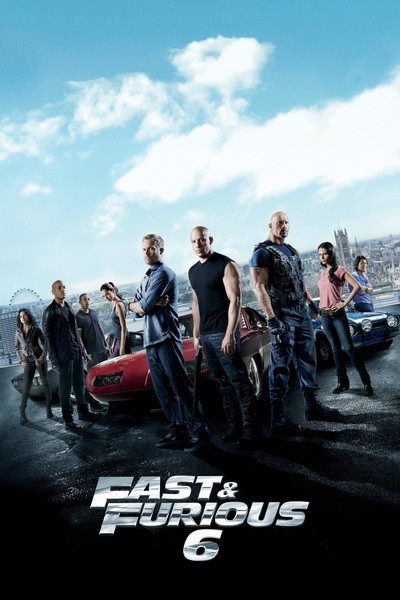