“Deadpool” is the cinematic equivalent of that kid in school who would always say how much he didn’t care what people thought of him, but just loud enough so everybody could hear him. It is the teenager who pretends to be too cool to care, but wants you to like him so badly it hurts. Of course, this is partially a byproduct of being a cog in the machine of the superhero movie marketing system—you unavoidably have to hit a few of the beats of the genre in order to satisfy the audience. However, “Deadpool” fails to live up to the potential of its beloved source material, subverting its own agenda by becoming a remarkably generic, by-the-numbers man-in-tights flick. “Deadpool” is about a guy who constantly pushes back against the expectations of the superhero, but the movie about him fails to match his rebellious personality. It’s a remarkably straightforward origin flick, lacking in true satire of its genre, carried almost entirely by its lead. Deadpool is a fun character, but he’s still in search of a fun movie to match his larger-than-life personality.

After years in development limbo, Ryan Reynolds finally gets a role that he was undeniably built for in this adaptation of Fabian Nicieza and Rob Liefeld’s Marvel creation. A lot of pushback against reviews of comic book films tends to come from those who believe the critic unaware of the source material’s inherent strengths, so it seems fair to note that I read Deadpool back in the ‘90s. I know the character has come a long way since then, but the movie iteration isn’t that far from what I remember about the man in red who refused to play by the rules.

The movie version of Deadpool will remind you, over and over again, often in fourth wall breaks, how much he doesn’t care about those rules. The majority of “Deadpool” plays out in flashback after an opening sequence in which Deadpool destroys a convoy carrying his nemesis, Ajax (Ed Skrein). We learn that Deadpool used to be a merc named Wade Wilson (Ryan Reynolds). We meet two key figures in Deadpool’s life: girlfriend Vanessa (Morena Baccarin) and best bud Weasel (T.J. Miller). Wade and Vanessa seem to be charting a course to Happily Ever After when Wilson is diagnosed with late-stage cancer. A mysterious recruiter (Jed Rees) offers Wilson a deal: submit to the testing of the Weapon X program (which created Wolverine), and save your life. Wilson is experimented on by Ajax (and his partner in villainy named Angel Dust, played by Gina Carano) and becomes a mutant, blessed by enhanced fighting and regenerative powers. When Ajax leaves him in a burning building, Deadpool spends the next year training to hunt him down and kill him. Two X-Men—Colossus (a motion-captured performance by Stefan Kapicic) and Negasonic Teenage Warhead (Brianna Hildebrand)—try to intervene to keep the delicate balance between mutants and humanity from getting too violent, and end up fighting alongside Deadpool.

Debut director Tim Miller’s background in animation—he also did the amazing title sequence for “The Girl with the Dragon Tattoo”—makes “Deadpool” a highly energetic flick, but to say the piece is lacking in depth would be an understatement. It’s almost purposefully shallow, regularly commenting on both its existence and that of other films within the superhero universe (when Deadpool is being taken back to the X-Men mansion to meet with Professor X, he asks “McAvoy or Stewart?” and jokes about how many times it has been blown up). There’s a difference, however, between referencing a genre and truly satirizing, and the writers of “Deadpool” are too often satisfied with the former instead of the latter. At times, “Deadpool” plays like a “Scary Movie” version of an "X-Men" flick, which is inherent in the comic book but less satisfying when stretched out to feature length.

It doesn’t help that “Deadpool” vacillates wildly from being cooler than the genre it now exists within and totally embracing its broadest clichés. Some might argue that “Deadpool's" bipolar approach—alternately too cool to care and downright maudlin with its melodrama—is reflective of the character’s split psyche, but that’s not nearly developed enough to be successful. Why not reflect it structurally too instead of delivering such a by-the-numbers story? A memorable villain or even an interesting action set piece? We couldn’t put those in between the jokes? And every time it feels like “Deadpool” is going to get truly dark, edgy, or interesting, it resorts to a cheap joke. Ripping on Limp Bizkit? Calling the bald character "Sinead" TWICE? Half the jokes just don’t land, and they’re the kind of faux-edgy you hear on an open mic night when someone’s trying to get attention. In 1995.

Thank God for Reynolds. Baccarin is well-cast and I generally like Miller (especially on “Silicon Valley”), but “Deadpool” is owned front-to-back by Reynolds, who famously fought to play this character. He jumps into the role with everything he’s got, providing an energy that’s often missing from superhero flicks, and he makes even the lamest jokes more tolerable. I just wish the rest of “Deadpool” knew what to do with him. 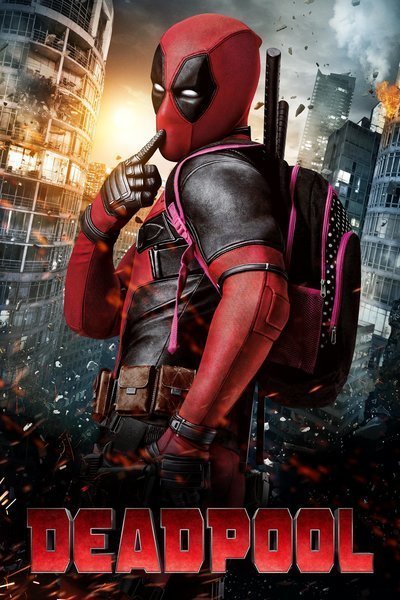 Rated R for strong violence and language throughout, sexual content and graphic nudity.

Jed Rees as The Recruiter