Ever since William Moulton Marston created her in 1941, Wonder Woman has always been at her best when her stories lean into the feminist ethos at her core. When artists treat her compassion as the key to understanding her—rather than her brutality in battle—audiences are privy to a superhero who offers what no other can: a power fantasy that privileges the interiority and desires of women. But film rarely has made room for the fantasies of women on such a grand scale. And in comic adaptations, women can be tough, funny, and self-assured. But rarely are they the architects of their own destiny.

As a longtime Wonder Woman fan, I worried her distinctive edges would be sanded off when it came time for her standalone film. It’s arguably easier to sell Wonder Woman as a vengeful heroine in the vein of countless others, but less distinctive. But early in the film I noticed the terrain that director Patty Jenkins turned to most often in order to create the emotional through-line. It wasn’t the glimmer of a blade or even the picturesque shores of Themyscira, the utopian paradise Wonder Woman calls home. Through moments of quiet verisimilitude and blistering action sequences, Jenkins’ gaze often wisely returns to the face of her lead heroine, Diana (Gal Gadot). At times, her face is inquisitive, morose, and marked by fury. But more often than not she wears a bright, open smile that carries the optimism and hope that is true to the character’s long history as well as a much-needed salve from what other blockbusters offer. In turn, “Wonder Woman” isn’t just a good superhero film. It is a sincerely good film in which no qualifiers are needed. It’s inspiring, evocative, and, unfortunately, a bit infuriating for the chances it doesn’t take.

Written by Allan Heinberg, with a story also by Zack Snyder and Jason Fuchs, the story uses a variety of inspiration culled from Wonder Woman’s 76-year history. As a young girl, Diana enjoys the loving protection of the Amazons of Themyscira, a secluded island paradise created by the gods of Olympus. No Amazon is fiercer or more protective than her mother, Queen Hippolyta (Connie Nielsen). But Diana longs to be trained in the art of war by her aunt, Antiope (a stellar Robin Wright). She grows from a kind, young girl into an inquisitive, brave, young woman who never hesitates to helps those in need. Even a man like Captain Steve Trevor (an endlessly charming Chris Pine), who brings news of World War I when he crash-lands on the island disrupting this all-female sanctuary, gets saved by her. Diana leaves behind the only life she’s ever known, heading to late 1910s London to stop the war she believes is influenced by the god Ares.

Cinematographer Matthew Jensen, production designer Aline Bonetto, and costume designer Lindy Hemming form Themyscira into a gorgeous utopia that utilizes a variety of cultural touchstones. It’s free of the Hellenic influence you’d expect from a story that takes such inspiration from Greek myth with the Amazons creating their home in a way that respects the lush nature around them rather than destroying it. It isn’t sterile either. The scenes set in Themyscira have a dazzling array of colors including the gold of armor, the cerulean blue of the sea that surrounds them, warm creams, and deep browns. Jenkins films many of these scenes in wide shot, reveling in the majestic nature of this culture. Similarly, the history of the Amazons, told in a dense but beautifully rendered backstory by Hippolyta, evokes a painterly quality reminiscent of Caravaggio. Having said that, while “Wonder Woman” has a lot to offer visually, what makes this film so captivating is Gal Gadot and Chris Pine.

Gadot wonderfully inhabits the mix of curiosity, sincerity, badassery, and compassion that has undergirded Wonder Woman since the beginning. Most importantly, she wears her suit, the suit doesn’t wear her. She evokes a classic heroism that is a breath of fresh air and nods to Christopher Reeve’s approach to Superman from the 1970s. Likewise, Pine matches her hopefulness with a world weariness and sharp sense of humor. He’s more than capable at bringing an emotional complexity to a character most aptly described as a dude-in-distress. There are particularly great scenes at the beginning, as Diana talks about men being unnecessary for female pleasure. Steve seems undone by her presence, which makes the development of their story authentic. Their chemistry is electrifying, making “Wonder Woman” a successful romance and superhero origin story set during one of the most brutal wars.

At their best, blockbusters evoke awe that can be both humbling and thrilling. Think of the first time you saw the T-Rex in “Jurassic Park” or the suspense that suffuses all of "Aliens." “Wonder Woman” excels at this particularly in the earliest chapter set in Themyscira. I felt my heart swell watching Antiope smirk during an intense fight and Hippolyta’s tender scenes with Diana. “Wonder Woman” is like nothing that has come before it in how it joyously displays the camaraderie among women, many of whom are women of color and over 40. It's electrifying watching the Amazons train and talk with each other. These women are fierce and kind, loyal and brave. If anything, I wished the film dwelt in Themyscira a bit longer, since their culture is so poignantly rendered. Also, it was just awesome to see Artemis (Ann J. Wolfe) and Antiope in battle.

Elsewhere, the supporting cast is uneven. The villains—an obsessive German General Ludendorff (Danny Huston) and the mad scientist Doctor Maru nicknamed Doctor Poison (Elena Anaya)—are painted too broadly and given too few details to have a lasting impact. Diana’s comrades that Steve rounds up are similarly crafted with little detail. Charlie (Ewen Bremner) is a Scottish sharpshooter, ravaged by what he’s witnessed in the war. Chief (Eugene Brave Rock) is a Native American, capitalizing on the war for profit. Sameer (Saïd Taghmaoui) is a confidence artist of sorts. But the actors are able to give these characters enough sincerity and wit to make their appearances memorable.

While “Wonder Woman” is an overall light, humorous and hopeful movie, it isn’t afraid of touching on politics. The feminism of the film is sly. It’s seen in moments when characters of color comment on their station in life and Diana faces sexism from powerful men who doubt her intelligence. Of course, the feminism, charming performances, and delightful humor would be nothing without the direction by Patty Jenkins.

Superhero films inherently carry the thrill of seeing these characters come to life and brandish great abilities, but far too often the fight scenes are neither epic nor engaging. So often they’re flatly lit, unimaginatively framed extravaganzas of characters fighting in airplane hangers and other drab surroundings. But what makes “Wonder Woman” so blistering is Jenkins’ distinctive gaze particularly in the fight scenes. Yes, the CGI is at times half-baked, which occasionally would snap me out of the momentum, but, overall, her voice as a director is so distinctive and her handling of the action so deft I was in complete awe. She shows off the great physicality of the Amazons, Diana's included, giving the action full room to breathe without being burdened by excessive editing or an over-reliance on close-ups. She treats action as a dance of sorts, with important characters having their own distinctive styles so that nothing ever feels repetitive. The sequences depicting Themyscira and Diana’s first entry on the battlefield of World War I are particularly exemplary.

Unfortunately, there are several choices that prevent the film from fully inhabiting the unique, feminist aims presented at the beginning. Ares, when he’s finally introduced near the very end, at first seems to be a somewhat clever take on the God of War. He isn’t so much seeking to end the world as create a new one by influencing the darkest aspects of mankind. But then the story tips into being a far more traditional superhero film than it had been previously.

It’s in the third act that the constraints of being part of an extended cinematic universe become apparent. It’s as if the last 30 minutes were cut from another film altogether that sought to create the bombastic, confusing, fiery sort of finale that far too many superhero works hew toward. The third act's approach to Diana’s true origin creates a distinct schism between its sincere feminist aims and the desires of a company that often doesn’t understand why people are drawn to this character in the first place. But there are enough moving touches—like Diana’s last scene with Steve—that prevent the finale from weighing down the film entirely.

Despite its flaws, “Wonder Woman” is beautiful, kindhearted, and buoyant in ways that make me eager to see it again. Jenkins and her collaborators have done what I thought was previously impossible: created a Wonder Woman film that is inspiring, blistering, and compassionate, in ways that honor what has made this character an icon. 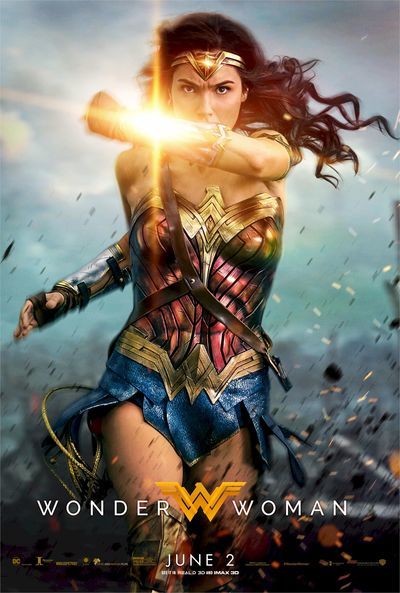 Rated PG-13 for sequences of violence and action, and some suggestive content.

Writer (based on the Characters from DC: Wonder Woman created by)