Once Upon a Time ... in Hollywood

The title of the ninth film by Quentin Tarantino, “Once Upon a Time … in Hollywood,” is meant to recall Sergio Leone’s masterpiece “Once Upon a Time in the West.” It's a nod to the Western genre influence on Tarantino's latest—both structurally and in the actual plot—and the way movies about the Old West play with actual history. Just as the Western has often used real people and places as templates to tell fictional stories, Tarantino has crafted an elegiac ode to a time he’s only experienced through books and movies. Tarantino once said, “When people ask me if I went to film school I tell them, ‘no, I went to films.’” And it’s that education by projector light that weaves its way through every frame of “Once Upon a Time … in Hollywood,” a movie only he could have devised. And yet this is not the film that hardcore fans of “Pulp Fiction” and “Inglourious Basterds” may be expecting. It’s somber at times in the way it seems to be trying to grab something just out of reach—the promised potential of the people on the fringe of the city of angels, an attempt to capture a mythical time when movies, real life, and imagination could intertwine.

The majority of “Once Upon” takes place on a February weekend in 1969, introducing us to its two leads, TV actor Rick Dalton (Leonardo DiCaprio) and his longtime stuntman and BFF Cliff Booth (Brad Pitt). Rick was the star of a hit Western show called “Bounty Law” but he’s struggling to figure out what’s next, keenly aware that his days of heroism are ending as he ages out of Hollywood—and he’s encouraged by a bigwig played by Al Pacino to go to Italy to reboot his career with spaghetti westerns. Cliff is way more laid-back, the kind of guy who loves his dog almost as much as he loves Rick and says what he means even to someone like Bruce Lee (Mike Moh), whom he actually fights in one of the film’s most crowd-pleasing scenes. Lee is only one of the familiar names in the film, as Tarantino populates the world around his fictional creations with real famous faces from Steve McQueen (Damian Lewis) to James Stacy (Timothy Olyphant).

Of course, as most people know, the real-life figures living next to Rick Dalton are the most controversial ones—Roman Polanski (Rafal Zawierucha) and Sharon Tate (Margot Robbie). Much has already been written about Robbie’s limited line total, and it’s because Tarantino doesn’t see Tate as much as a person as an idea—a glimpse of Hollywood’s optimistic happiness. Whether she’s dancing at a party at the Playboy mansion or sneaking in to watch herself at a public showing of “The Wrecking Crew,” she’s almost glowing every time she appears on-screen, a counter to Dalton’s increasing anxiety. And Tarantino knows that this presentation of a star we know will be snuffed out in the real world adds a sense of melancholy and dread to the entirety of the production, even when it’s not explicitly about Sharon Tate or the hippies out at Spahn Ranch.

The bulk of Tarantino’s film is designed to be a dreamy snapshot of the movie business and life in Hollywood in the late ‘60s. We get dozens of shots of Cliff driving Rick around town, really just to show off the amazing production design, classic cars, and music choices on the radio. The approach by Tarantino and master cinematographer Robert Richardson is incredibly finely tuned, and yet the film never loses that dreamlike aesthetic for the sake of realism—we’re watching a movie not so much about an era but about the movies of that era. It’s a setting once-removed from reality, capturing a time through the way celebrity culture and movies defined it more than the historians. It’s a captivating movie just to live in, complete with long dialogue scenes that some QT fans will say lack the pop and zip of his most playful work but feel more in tune with his character-driven scenes in something like “Jackie Brown.”

Most of all, “Once Upon a Time … in Hollywood” is the first Tarantino film to feel like the product of an older director. Tarantino was the problem child of Hollywood for years, redefining the industry at such a young age, but “OUATIH” could not have been made by the ‘90s Tarantino (or, at least, it would have been a very different and much worse movie). One can see Tarantino reflected in Dalton, someone looking back at their career and wondering what’s next, still able to get excited by the fact that he lives next to the director of “Rosemary’s Baby” but also welling up over a book he’s reading about a fading hero because he sees himself in it.

DiCaprio proves to be such a perfect choice for Dalton that one can’t really imagine anyone else in the part. He’s always had classic Hollywood charisma, but he imbues Dalton with that poignant mix of longing and fading optimism that often comes with aging—sure, he loves his life and hanging with his buddy but he’s nervous when he thinks about what’s next, wondering if he hasn’t missed out on something forever. It’s one of his best performances, although he’s arguably topped by a fantastic Pitt, who gets a part from his “Basterds” director that reminds viewers how wonderful he can be in the right material. He hasn’t been this playful and charismatic in years.

A lot of people are going to focus on the end of “Once Upon a Time ... in Hollywood.” The minute that we see that the film has jumped forward to August of 1969 and that Sharon Tate is very pregnant, anyone with even a passing knowledge of history knows what’s coming. Or at least they think they do. The final few scenes will be among the most divisive of the year, and I’m still rolling around their effectiveness in my own critical brain. Without spoiling anything, I’m haunted by the final image, taken from high above its characters, almost as if Tarantino himself is the puppet master saying goodbye to his creations, all co-existing in a vision of blurred reality and fiction. However, the violence that precedes it threatens to pull the entire film apart (and will for some people). Although that may be the point—the destruction of the Tinseltown dream that casts this blend of fictional and real characters back into Hollywood lore.

I do know this for sure—I can’t wait to see this film again. It’s so layered and ambitious, the product of a confident filmmaker working with collaborators completely in tune with his vision. Every piece fits. Every choice is carefully considered. Whether it all adds up to something is now up for audiences to decide, but this is a film that feels like it’s not going away anytime soon. It’s one of those rare movies that will provoke conversation and debate long enough to cement itself in the public consciousness more than the fleeting multiplex hit of the week. Love it or hate it, people will be talking about it. And that’s something the older Tarantino has in common with the younger one. He hasn’t lost any of his power to fire people up. If only there were more like him. 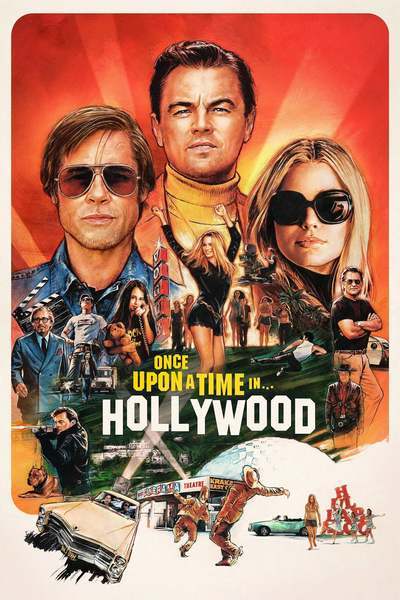 Rated R for language throughout, some strong graphic violence, drug use, and sexual references.