"Okja" is the heartwarming tale of a girl and her giant mutant pig, brought to life through a mix of digital effects and puppetry that makes a nonexistent beast seem as real as E.T. or King Kong. It is also the tale of animal rights activists doing battle with a Monsanto-like corporation that wants to turn said pig, allegedly the cutest in a batch whipped up by genetic scientists, into a poster animal for a revolutionary line of meat products. These two modes might seem incompatible. But as overseen by the great South Korean director Bong Joon-ho ("Snowpiercer," "The Host"), they mesh in a work of melancholy enchantment, by turns sweet, funny, scary, sad, and—in the manner of all good science fiction movies—thought-provoking.

The heroine is a South Korean farm girl named Mija (An Seo-hyn), an orphan who lives with her grandfather Heebong (Byun Hee-bong) in a mountainous stretch of rainforest. Her constant companion is the title character, Okja, a pig with the rounded snout and leathery skin of a hippopotamus, a soft pink belly, and trusting eyes. Okja loves Mija and Mija loves Okja, but their sacred bond is governed by a ticking clock. As revealed in an opening flashback, Lucy Mirando (Tilda Swinton), the CEO of the Mirando Corporation, seeded the world with prototype pigs and announced that when they'd all spent ten years growing to maturity, the company would choose the finest environment in which to raise them, the better to provide the world with cheap but high-quality meat and meat products. The pigs were presented to the media as a "discovery" even though they were devised in Mirando's labs. This is one of many deceptions labeled "little white lies" by Lucy. They are meant to bamboozle animal rights activists and protestors against genetically modified organisms (GMOs).

When the ten year mark arrives, Mija's grandfather tells her that he had to turn Okja over to the company, but that she can take solace in his compensatory gift to her, a tiny gold pig. Mija and Okja's separation kicks off a story that follows the pig from South Korea to New York City and (parenthetically) to a plant near Paramus, New Jersey, where hundreds of other prototype pigs are kept for experimentation and eventual slaughter. Members of the Animal Liberation Federation (ALF, just like the sitcom alien) briefly kidnap Okja and fit her with a camera that they hope will expose the company's animal rights abuses.

The ambitious screenplay includes discussions of corporate responsibility, the ethics of meat consumption, the acceptable threshold of animal cruelty, and other matters that you might not expect to see find in a film so simply told and lavishly produced. Is it a kids' movie? Every parent's mileage will vary. Without getting into too many plot specifics right off the bat, it should be said that Bong and his co-writer, Jon Ronson—a journalist, filmmaker and social critic who wrote The Psychopath Test: A Journey Through the Madness Industry and So You've Been Publicly Shamed—have made a film that lots of little kids will want to see but that not too many will be able to handle.

To their credit, the moviemakers signal right away that this isn't a film that adults can use as an electronic babysitter. The dialogue is liberally peppered with F-words, and the more exaggerated jokes about corporate hypocrisy are reminiscent of non-child friendly satires like "Dr. Strangelove" and "Network" (upon learning that it will take ten years for the pigs to grow, a reporter moans, "Jesus Christ—I'll be dead by then!"). There are also visual and thematic nods to cartoonist turned director Terry Gilliam, who made films that were childlike and sometimes childish but never strictly for kids—in particular the 1985 anti-fascist fable "Brazil," which appears to have inspired the derring-do of ALF's membership, chivalrous rebels who evade police by diving off bridges. And there are many upsetting images of animal abuse, particularly towards the end—not as harsh as what you find through a YouTube search, but nevertheless unusual for commercial cinema. These harrowing moments are always tied to the characters' wants as well as to the film's belief in showing compassion for creatures lower on the evolutionary chain. But because we've invested deeply in Okja and Mija's story, they're still hard to take.

The film is unapologetically against the assembly line-style "harvesting" of animals for meat, and perhaps, on a very basic level, anti-meat, period. Despite gentle mockery of the activists' self-righteousness and tendency to announce their beliefs melodramatically, and an unfortunately unexamined strain of fanaticism exhibited by the group's leader Jay (Paul Dano), the movie is very much on ALF's side. The gloomy concrete-and-ironwork facility where Okja's brothers and sisters are held suggests a concentration camp for animals; when key characters trek away from its main gates, Bong's compositions and texture palette evoke "Schindler's List" as well as George Miller's "Babe: Pig in the City."

The latter was blasted as too dark for kids. Bong's film is even tougher going, mainly because it steers clear of the "all's well that ends well" finale we expect. And yet, in the end it is somehow warmer, or at least less brutalizing. Maybe it's because Bong is a showman who packs every frame with three jokes and grace notes where most directors would only offer one, if that. The chain reaction slapstick sequences are as thoughtfully assembled as "Okja" itself, building and paying off amusing bits of business to create movies-within-movies. The pig's fearful rampage through an underground shopping mall in Seoul is a marvel of composition and editing, creating surprise through clever camera angles and unexpected cuts while giving us a glimpse of the bland consumer paradise that companies like Mirando depend on. The score, by Jaeil Juing, is a delight, alternating gentle acoustic guitar with his version of klezmer music, which lends a whimsical quality to action scenes while reminding us that this is, in a sense, a kosher film. The soundtrack of pop tunes is charming as well, especially when it scores a slow-motion  sequence to John Denver's "Annie's Song" (for the second time this year, oddly; the other time was in "Free Fire").

The movie is so packed with incident and characterization that that it sometimes loses focus or wanders down alleyways it can't properly explore. There's a saggy midsection that concentrates too much on the corporate bad guys, scenery chewers who work best in small doses (besides Swinton, who plays both Lucy and her even more evil twin sister, Nancy, there's Giancarlo Esposito as a ruthless corporate bean counter). Jake Gyllenhaal's performance as a hypocritical nature TV celeb is the only flat-out casting disaster. Jim Carrey-style clowning is not, to put it mildly, this actor's most comfortable mode, and his fidgety, braying, often mincing performance is so misjudged that it destroys scenes that should have been unsettling or touching. And there are subplots that don't get the attention they deserve—in particular the conflict between ALF leader Jay and his lieutenant K (Steven Yeun of "The Walking Dead"), which teases a conversation about how righteousness becomes intolerance that "Okja" isn't actually interested in having.

But while these flaws might have shattered other movies, they barely ding the surface of this one. Like Brad Bird in "The Incredibles" and "Ratatouille" and the Pixar crew in "Finding Dory" and "Wall-E"—and like Steven Spielberg, the blockbuster filmmaker that Bong's style most often evokes—"Ojka" is an example of what popular cinema used to be. It's engrossing from start to finish, and masterfully juggles tones that might have caused viewer whiplash in a less carefully imagined work. It has a strong moral vision and stands as an example of political filmmaking aimed at the widest possible audience. Its point-of-view won't be to everyone's liking (I can see Fox News Channel getting a solid week's worth of programming from the fact that Netflix helped bankroll a blockbuster anti-meat picture).

But at a point in movie history where entertaining movies often stand for nothing and films with something to say keep forgetting to entertain us, this film's balancing act is remarkable. "Okja" never allows its philosophical and ethical interests to shove drama or comedy off to one side. The girl and her pig are usually front and center. When they aren't, it's their love that we're thinking of. And this is a love story, after all.

A repeated image shows the girl leaning into the pig's floppy ear and whispering to calm her down. We never hear exactly what she's whispering, but the tight closeups of Okja's mesmerized eye show us that she's listening intently and gets the gist—that the girl's words matter and make sense even though they don't speak the same language. The pig trusts her friend. All the film's many threads ultimately come back to questions of trust: what it means to keep it or betray trust, and whether there are circumstances where betrayal is necessary, and whether the trust between human and human is more meaningful than the trust between human and animal. Mija would tell you there's no difference. 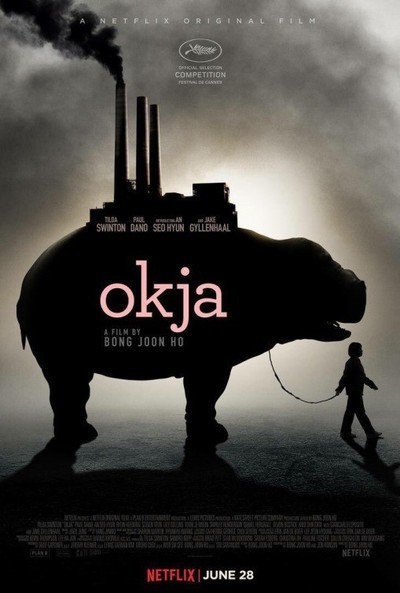