There was a period in the mid- to late 1990s when it seemed as if every other gritty independent film and a few studio wannabes were built around scenes where tough white guys smoke cigarettes, insult each other and launch into interminable monologues about some aspect of popular culture until an argument breaks out and everybody points guns at each other. This, unfortunately, has been the main legacy of Quentin Tarantino, whose first two hugely influential films "Reservoir Dogs" and "Pulp Fiction" could be boiled down to that very description, provided that you disregarded everything else that made them distinctive and good.

What followed the release of those movies was the cinematic version of a land rush, with directors, screenwriters and actors racing each other to stake out arid little plots of earth where they could build secondhand versions of films that were themselves constructed from borrowed and stolen pieces of other films (and often made no secret of what had been lifted). Probably eighty percent of these knockoffs could have been retitled, "Watch Me Do Something I Think Is Easy But That Really Isn't." "The Boondock Saints," "Reindeer Games," "Phoenix," "Truth or Consequences, New Mexico," "Things to Do in Denver When You're Dead," "2 Days in the Valley," "American Strays," "The Way of the Gun," "Suicide Kings," "8 Heads in a Duffel Bag"—I could go on, but then we'd be here all day, and I'd never get around to talking about Ben Wheatley's "Free Fire," a Tarantinoid film that arrives just in time to mark the 25th anniversary of "Reservoir Dogs," which premiered at the Sundance Film Festival back in 1992.

"Free Fire" is neither the best nor the worst of the Tarantino wannabes; at its worst, it's tediously unoriginal, and at its best, it's funny and reasonably involving. Either way, its temporal distance from "Reservoir Dogs"—a film it brazenly imitates, right down to the warehouse setting and the grandiose use of kitschy pop—makes it noteworthy. So does its status as part of one of the most striking filmographies of recent years: that of Wheatley and his screenwriting partner Amy Jump, who made "High Rise," "A Field in England" and 2011's "Kill List," a superior foray into somewhat QT-like territory.

The story begins with Stevo (Sam Riley) and Bernie (Enzo Cilenti) driving to a Boston warehouse to take part in a weapons deal that includes a couple of Irish Republican Army members, Chris (Cillian Murphy) and Frank (Michael Smiley). Two intermediaries involved in the deal, Justine (Brie Larson) and Ord (Armie Hammer), lead the group inside and introduce them to the chief weapons dealer, a smug, glad-handing, unfunny little jokester named Vernon, who of course is played by Sharlto Copley, an actor whose whole career seems to have been modeled on Hart Bochner's performance as Ellis the Yuppie cokehead in "Die Hard." Vernon has three associates, Martin (Babou Ceesay), Harry (Jack Reynor) and Gordon (Noah Taylor).

The cast soon expands to include several additional characters, including a couple of assassins who shoot into the warehouse with rifles from outside. Hidden motives and grudges are exposed as factors complicating this arms deal, which should have been simple and brief but becomes a complete disaster, with the core group shooting at each other from behind pillars and scrap heaps and discarded machinery and tending to their own wounds and others'. There's a bit of subtext involving the financial crash and the general decline of old fashioned manual labor (as photographed by Laurie Rose, the warehouse and the surrounding buildings and docks have a post-apocalyptic feel), and of course a lot of the dialogue has to do with the expectation of honor among thieves and the collective realization that in situations like this, there isn't any. There's a hint of budding romance between Chris and Justine (the only woman in the movie) and a couple of twists that you might or might not see coming, mostly having to do with hidden motivations.

That the actors all seem to be enjoying themselves goes a long way towards making "Free Fire" something other than a slog through played-out situations. Wheatley is a superb director with a strong sense of both geography and psychology, which means that, despite the film's overpopulated cast, you are never confused about where people are or what they're feeling at any given moment. Some of the actors make a strong impression—in particular Noah Taylor, who has been leaning hard into the grizzled-character-actor thing and is developing a Harry Dean Stanton vibe; and Hammer, whose eloquent, self-deprecating handsomeness evokes Brad Pitt. And the more deranged touches elevate "Free Fire" beyond its familiar setup. I never imagined that a filmmaker would press John Denver into service as, basically, the Ennio Morricone of a modern spaghetti Western, and yet here we are, and damned if it doesn't work.

All in all, though, this feels like a step backward for a director whose work has confounded and surprised more often than not. This is a relatively short feature that still feels too long, because once you realize that there's only one way that most of these relationships can resolve—with one party or the other dying of gunshot wounds—there isn't much for the viewer to do besides wait out the final credits and hope for some tasty character bits along the way. 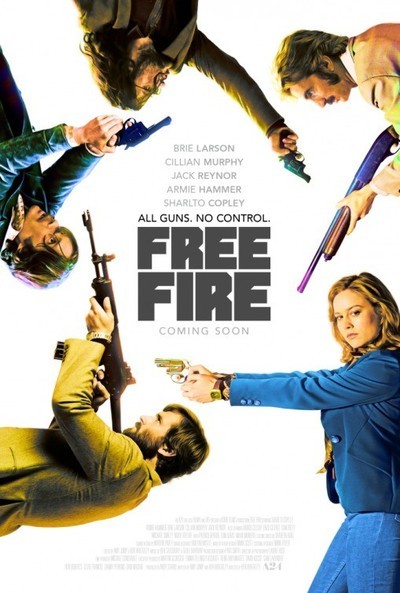