Based on the French graphic novel "La Transperceneige," Bong Joon-ho's "Snowpiercer" begins in the extremely not-too-distant future as mankind launches a final attempt to halt the spread of global warming once and for all. Needless to say, the plan backfires spectacularly and plunges the world into a new ice age that causes the extinction of all life forms. Luckily, before all this happened, wealthy industrialist Wilford (an inspired bit of casting that I dare not reveal), taking several pages from Ayn Rand, constructed a high-speed luxury train that can circle the globe without stopping or suffering the effects of the weather outside. Now, humanity's last remnants reside on the train—the well-to-do people living in comfort in the head cars with the poor and downtrodden masses stuck in back in cramped quarters and forced to subsist on protein bars made from...well, don't ask what goes into the protein bars.

After seventeen years of subhuman conditions, the people in back are about to explode and Curtis (Chris Evans) is elected to lead the charge, albeit reluctantly. There have been failed insurrections in the past but old-timer Gilliam (John Hurt) has an idea—one of the prisoners placed in cryogenic sleep, Namgoong (Kang-ho Song), was one of the train's original engineers before turning into a junkie and knows how to override the complicated system of locked doors to help with the forward progress. After realizing that the armed guards sent by Wilford's right-hand woman Mason (a nearly unrecognizable Tilda Swinton) are not as threatening as they seem, Curtis and Namgoong, along with a party that includes Edgar (Jamie Bell), Tanya (Octavia Spencer) and Namgoong's daughter Yona (An-sung Ko), set off for the head of the train and a final confrontation with Wilford to determine their fates. (Again, if you have any sense of surprise, do not look up the identity of the person playing Wilford.)

If the name "Gilliam" set off a little tremor of excitement when you heard it that is no accident because, with its combination of startling visuals, a head-spinning storyline and oddball characters that don't always conform to their presumed parameters, "Snowpiercer" is a film definitely in the vein of the works of the great Terry Gilliam, especially his 1985 landmark "Brazil" (which, funnily enough, also had a distributor that was originally unwilling to release it without massive cuts). However, while Bong may owe Gilliam a debt of inspiration, this is no copycat effort by any means. In his earlier films, Bong has demonstrated a knack for taking standard generic premises and twisting them around in new and unusual ways that entertain genre expectations while subverting them at every turn. Even though the idea of watching people trying to push their way through an unstoppable train may seem to have certain visual and dramatic limitations, he and co-writer Kelly Masterson always manage to keep things interesting.

From a visual perspective, "Snowpiercer" is never less than stunning as it provides thrilling images ranging from the desolate landscape outside (complete with the occasional body still frozen in mid-step) to a full-size aquarium with beauty that is outdone only by its implausibility. Despite the close quarters, Bong also comes up with a number of inventively-staged action sequences, the most memorable of which include a first-person look at a savage brawl in a completely dark car as seen through a pair of night-vision glasses and a visit to a classroom run by a teacher (Alison Pill) with an unexpected lesson plan. From a dramatic standpoint, the film is equally effective in the way that it includes the expected pulpy thrills and weirdo humor but also some unexpectedly affecting dramatic moments. There is one moment in which a character remarks that, because of conditions on the train, "I know what people taste like and I know babies taste best." It sounds like a sick joke but the line is delivered with the utmost seriousness, and, because we care about who is saying it, it turns out to be an unexpectedly powerful moment of human drama amidst the chaos. Likewise, the film's final shot is impressive in the way that it suggests triumph and potential terror at the same time.

Speaking of simultaneous triumph and terror, the mere act of seeing "Snowpiercer"  may prove to be a bit difficult. As some of you may have heard, the film has been at the center of a feud between its director and Harvey Weinstein, the film's distributor. According to reports, Weinstein disliked Bong's 126-minute cut and allegedly demanded the removal of 20 minutes before he would release it. Eventually, Weinstein relented and kept the film at its full length but decided to instead slash its distribution plan to what the kids refer to as a "limited release," which means that unless it becomes a surprise smash warranting a bigger run, there is an excellent chance that many people will never even get the chance to see it on the big screen where it really needs to be viewed in order for it to have maximum impact. Yes, this is how Hollywood really works these days and no, I don't get it either. 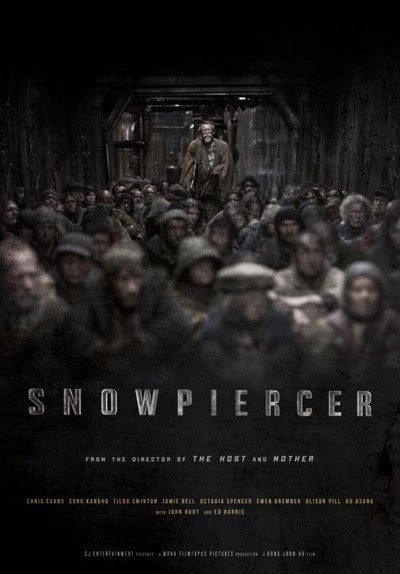