A popular topic that has been bobbing about the internet these days: Will the summer of Hollywood’s sequel and prequel box-office discontent bounce back with the arrival of “Finding Dory,” Pixar and Disney’s double-dip back flip into the same animated pool of undersea beings that propelled 2003’s wondrously endearing “Finding Nemo”?

Therefore, it is a relief to note that the follow-up has plenty of emotional hooks, some great lines and is no stinker, despite simply following what amounts to the same plot current as before except to the Pacific Coast of California instead of the Great Barrier Reef of Australia. If “Finding Nemo” felt like a blissful day at the beach, then “Finding Dory” is an eventful afternoon at an aquatic park—or, in this case, the Marine Life Institute that, as the omniscient recorded voice of Sigourney Weaver re-assures any PC-oriented visitors to the facility, is dedicated not to human amusement but to “Rescue, Rehabilitation and Release.” The result might be less fulfilling this time, but “Finding Dory” is ultimately worth the voyage.

Wisely, the film takes full advantage of what was “Finding Nemo’s” greatest asset besides its lushly multi-hued underwater inhabitants and plant life: Ellen DeGeneres’ buoyant spirit and child-like glee as she vocally gave life to Dory, the forgetful yet fearless blue tang whose struggles with short-term memory loss proved to be a crucial plus whenever the going got tough as stressed-out daddy clownfish Marlin searched for headstrong young son Nemo. After all, nothing is more freeing than barely being able to summon your past, which is why the impulsive Dory is so good at acting in the moment.

It can be a dicey proposition to upgrade a comic-relief supporting player into a headliner. But much like Robin Williams, who so memorably riffed up a blue streak as the Genie in “Aladdin,” DeGeneres and her sometimes goofy, sometimes giddy persona continues to be a perfect fit for the role that provided the uplifting salt-water soul of “Finding Nemo” and pretty much does the same here as Marlin (a returning Albert Brooks) and Nemo (replacement Hayden Rolence) swim alongside her on a new journey a year after the first.

The story is not as fresh of a catch as the original, even if the script is again by Andrew Stanton (along with co-writer Victoria Strouse), who once more directs with an assist from Angus MacLane. Ultimately, there is too much reliance on logic-defying Saturday-morning TV cartoon action as the main characters swim about by scooting through pipes and flopping from one liquid vessel to another at the institute. It was somewhat believable when the gang of fish led by Willem Dafoe’s world-weary Gill staged a great escape from the tank at the dentist’s office in “Finding Nemo.” But the sequel stretches beyond credibility when newcomer octopus Hank (a testy tangle of tentacles with chameleonic powers voiced by “Modern Family’s” Ed O’Neill) is somehow able to maneuver a runaway truck on a crowded highway when he can’t reach the pedals or see over the dashboard.

What your brain might not accept, however, your heart just might. “Finding Nemo” was propelled by its perceptive depiction of a single parent’s overwhelming need to protect a child, especially one with an undersized fin, instead of letting him fend for himself and gain a sense of independence. Here, Stanton calls upon the same sort of primal instinct when we initially meet Dory as an innocent, big-eyed, kiddy-voiced guppy whose concerned parents Charlie and Jenny (portrayed by Eugene Levy and Diane Keaton) explain how she must always tell whoever she meets, “I have short-term memory loss.” Or, as she sweetly calls it, “short-term remember-y loss.” Instead of her daffy-go-lucky grown-up self, Dory is a helpless tyke whose recall vaporizes almost instantly because of her learning disability and she inevitably wanders off into the undertow, leaving her despairing mom and dad behind to devastating effect.

The movie fully kicks in when the older Dory experiences an electric jolt of a flashback and, with that brief flicker, realizes she actually has parents. And off she goes, with ever-grumpy Marlin and supportive Nemo following soon after, to locate her family. She might be looking for her parents, but Dory is really unearthing her own identity and manages to stir up other defining memories along the way, no matter how fleetingly. That includes the sources of her inspirational motto, “Just keep swimming,” and how she came to speak “whale.”

Some old favorites from “Finding Nemo” float by including that cool turtle dude Crush and son Squirt, fish-school instructor Mr. Ray and those “Mine! Mine! Mine!”-chanting seagulls. But few of the new characters, which include a brain-addled beluga whale (Ty Burrell of “Modern Family”) and  a near-sighted whale shark (Kaitlin Olson), make a lasting  impression besides a pair of lazy Cockney sea lions (Idris Elba and Dominic West, together again after being on opposite sides of the law on “The Wire”) rehabbing at the institute who only stir whenever their silent crazy-eyed cohort Gerald (who appears related to Ed the hyena from “The Lion King”) dares lay a flipper on their rock.

Except for Marlin, who learns a valuable lesson in empathy after hurling a hurtful observation at Dory when she inadvertently puts Nemo in harm’s way, almost every creature encountered from a bird-brained loon to an immense chatty clam that recalls Audrey II in “Little Shop of Horrors” gladly helps out our heroine with her mission. You can guess whether it’s accomplished or not, but let’s just say there is a have-a-hanky-on-hand happy ending. Actually, there are two or three happy endings since the filmmakers don’t know when enough is enough. That includes a coda that requires wading through a waterfall of end credits that nonetheless is worth the wait. 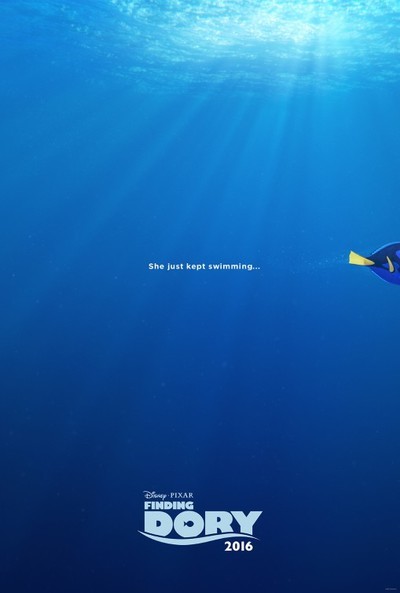