During this past month, the horror genre has taken it especially hard on the chin with the release of such instantly and intensely forgettable duds as “The Grudge,” “Underwater” and “The Turning,” a trio of films that collectively failed to inspire the same amount of raw terror found in the trailer for that “Peter Rabbit” sequel. Therefore, people might understandably look at “Gretel & Hansel,” a film being dropped into theaters with little advance word and on Super Bowl weekend to boot, and assume that it's just another movie destined to come and go from the multiplex in net-record time. In reality, this is the kind of low-key gem that horror fans are always looking for but so rarely find—one that is smartly conceived, visually stylish and genuinely creepy at times.

As one might surmise from the arrangement of the names in the title, the focus of this version of perhaps the grimmest of all the Grimm fairy tales is on Gretel (Sophia Lillis), who is depicted here as several years older than brother Hansel (Samuel Leakey)—old enough so that when she goes out to seek work to provide for herself, Hansel, and their insane mother, her lecherous prospective employer inquires as to whether she has “kept her maidenhood.” Needless to say, that opportunity goes sour and Gretel’s troubles are compounded when her mother kicks her and her brother out to fend for themselves. (“Dig yourself some pretty little graves.”) They spend one night with a kindly woodsman (Charles Babalola) who gives them food, directions, and sage advice but the journey is long and arduous, lightened only by a brief respite when they consume some wild mushrooms with certain unexpected qualities.

Just when all seems lost for the two, they stumble upon a house in the middle of nowhere and spy a lavish and seemingly unattended feast sitting on the table just waiting for someone to eat. This is the home of Holda (Alice Krige), a strange older woman who invites the two in to eat and take refuge. While Hansel is more concerned with filling his belly to notice anything else, even when his host appears to be sniffing his hair, Gretel picks up right from the start that strange things are afoot. The house seems way bigger on the inside than logic should dictate. The enormous spread of food never seems to abate despite the lack of any garden or livestock on or around the premises. And while Gretel has always odd dreams and premonitions, they take on a decidedly darker turn the longer that they stay with Holda. You probably think you know where this is going from here. You may not be correct in your assumptions.

“Gretel & Hansel” is the third film from director Osgood Perkins, whose previous efforts included “The Blackcoat’s Daughter” and “I Am the Pretty Thing That Lives in the House.” Neither of those movies quite worked for me, I admit, but they did do enough to suggest that he was an intriguing new directorial voice who was clearly on the cusp of doing something really interesting once he got a hold of the right material. With this film, he has done that and the results are often startlingly good. The screenplay by Rob Hayes takes the familiar narrative and finds a fresh approach, leaning towards a feminist take on the tale that may not exactly be subtle at times (her symbolic passage from childhood to womanhood is prefigured by the appearance of a long wooden staff and a vat of mysterious viscous goo that is perhaps the most over-the-top touch in the otherwise subdued story) but it does offer up an audacious and often surprising slant to the proceedings. As much as it is a horror story, this perspective allows the film to also work as a thoughtful coming-of-age tale of a young woman gradually realizing that she does have power after all, and can use it to make a path into the world that is entirely of her own design.

Many of the other elements of the film click in unexpectedly rewarding ways as well. Visually, the film is a constant knockout as Perkins and cinematographer Galo Olivares lend it a hypnotic and stylishly moody look that makes it feel at times like a lost work from Italian horror maestro Mario Bava, a sensation helped by the inspired production design by Jeremy Reed. The synth-heavy score by composer Robin Coudert adds an extra layer of Goblin-like unease to the proceedings that is also enormously effective. The performances by the three lead actors are strong and sure, all the more so because they all commit to their roles and never come across as though they are goofing on the material. (Although there are a couple of dark laughs here and there, the film is refreshingly straight-faced for the most part.) As for the hardcore genre buffs wondering how effectively scary a PG-13 horror film can be will be happy to know that Perkins creates a strong aura of unease that never lets up and only once devolves into anything resembling a cheap “BOO!” moment.

My only real problem with “Gretel & Hansel” is that it contains an intermittent voiceover from Gretel that feels as if it was added at the last second in order to overtly explain things that could have been easily and more effectively left unsaid. That said, with its offbeat narrative and emphasis on moodiness over ham-handed shocks, this is the kind of genre film that is probably a better fit for arthouses than multiplexes—it will almost certainly join “Color Out of Space” as one of the first new cult favorites of the new decade—and those who go to it expect the usual nonsense may find themselves put off by its quieter and more ultimately unsettling approach. Those in the mood for something that is off the beaten path, on the other hand, should make a beeline to catch it while you can. 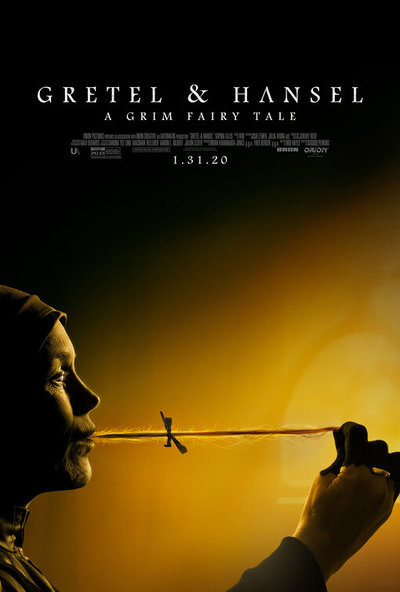 Charles Babalola as The Hunter