According to IMDb, the seemingly inexhaustible Nicolas Cage has no fewer than six additional movies in various stages of production that are currently scheduled for release in 2020, ranging from high-profile studio outings to the kind of demented head-scratchers that he somehow manages to sniff out in the manner of a pig finding truffles. And yet, none of these films may be able to top his latest effort, "Color Out of Space," in terms of sheer nuttiness. Considering that the film takes its inspiration from one of the most famous short stories by the legendarily weird H.P. Lovecraft, and was directed and co-written by Richard Stanley (making his first stab at narrative filmmaking since being fired from his remake of “The Island of Dr. Moreau” after only a few days of shooting), there was very little chance that it was every going to be just another run-of-the-mill project. However, the addition of Cage to the already heady cinematic brew definitively puts it over the top, making it the kind of cult movie nirvana that was its apparent destiny from the moment the cameras started rolling.

The film centers on the Gardner family, who have recently left the hustle and bustle of the city for a more bucolic life in a remote house near a lake in the deep woods of Massachusetts. While father Nathan (Cage) is gung-ho about becoming a farmer and raising alpacas (“the animal of the future”) despite no discernible talent for either, wife Theresa (Joely Richardson) is preoccupied with recovering from a recent mastectomy, eldest son Benny (Brendan Meyer) is off getting stoned most of the time, teen daughter Lavinia (Madeline Arthur) vents her annoyance at the move by dabbling in the black arts with her paperback copy of “The Necronomicon” and young son Jack (Julian Hilliard) more often than not simply gets lost in the shuffle. The Gardners are not crazy or hostile in any way, but it also becomes quickly obvious that their isolation has begun to drive them all a bit batty.

That weirdness escalates one night when the sky turns an almost indescribable shade of fuchsia, and a meteorite crashes into their front yard. Although the meteorite itself soon crumbles away, strange things begin happening in its wake. A batch of new and heretofore unseen flowers begin blooming while Nathan’s tomato crop comes in weeks ahead of schedule; the family’s phones, computers, and televisions are constantly being distorted by waves of static that render them all but useless. The Gardners themselves begin exhibiting signs of strange behavior as well: Nathan begins acting daffier than usual, flying off into rages at the drop of the hat; a seemingly dazed Theresa chops off the tops of a couple of her fingers while cutting carrots; Jack is constantly staring and whistling at a well that he claims contains a “friend.” Before long, everything in the area begins mutating in indescribable ways, and while Benny and Lavinia recognize what is happening around them, even they appear to be powerless to escape the grip of whatever is behind everything.

The stories of H.P. Lovecraft have inspired, directly or otherwise, any number of films over the years but with very few exceptions (chiefly Stuart Gordon’s cult classics “Re-Animator” and “From Beyond”), most of them have not been especially good. In most cases, the problem is that Lovecraft’s stories tended to focus on indescribable horrors and much of the impact for the reader came from taking the vague hints that he did parcel out and then picturing it in their own minds, where their imaginations had no limitations or budgetary restrictions. To successfully adapt one of his works, a filmmaker needs either an unlimited budget to try to bring his horrors fully to life, or the kind of unlimited imagination that allows them to take Lovecraft’s suggestions and go off in their own unusual directions. When these requirements are missing, the results can be fairly dire, as anyone who saw “The Curse,” a dire low-budget 1987 adaptation of Color of Outer Space, can attest.

In this case, the film works because it is clear that Stanley is not only working on the same wavelength as Lovecraft was when he wrote the original story, but has managed to transform the author’s decidedly purple prose into cinematic terms. Take the titular color, for example. In the original story, it is never properly described to us other than being of a shade never before seen on the typical color spectrum. That sort of non-description description can work on the page but isn’t especially helpful as a guide for someone who has to bring it to life. Stanley proves himself to be up to the challenge, and hits upon a wild color scheme that honors Lovecraft’s intentions by bathing everything in a genuinely otherworldly tinge. Not content to rest there, he builds upon that weirdness with an equally vivid soundscape, including a creepily effective score by Colin Stetson. Stetson's score shifts levels of reality in aural terms and conjure up the kind of terrors that are even harder to shake than the numerous and undeniably eye-popping physical mutations on display.

Stanley also manages to work the film’s additional otherworldly element—Cage's performance—organically into the material, without losing any of its total strangeness in the process. For fans of oddball cinema, a Cage-Stanley collaboration is the stuff dreams are made of. In that respect, it does not disappoint. Obviously, once things go crazy in the second half, Cage brings out the weirdness full force (even randomly employing the wheeling vocal tic that he used decades earlier in “Vampire’s Kiss”). But what is interesting is that, instead of making Nathan into a completely normal guy who does an immediate 180 as a result of the strange occurrences, he and Stanley instead see him as a guy who is already a bit off right from the start, albeit in endearingly oddball ways. As a result of his work in these early scenes, there is an unexpected degree of poignance that he brings to the proceedings later on even as things go fully gonzo.

The chief problem with “Color Out of Space” is that, at nearly two full hours, it is a little too much of a good thing at times, with some plot elements—chiefly one involving potentially shady dealings by the town’s mayor (Q’orianka Kilcher)—that could have easily been jettisoned. For the most part, however, the film is the kind of audacious and deliriously messed-up work that fans of Stanley, Cage, and cult cinema have been rooting for ever since the existence of the project became known. Both as an effective cinematic translation of Lovecraft’s particular literary skills, and as a freakout of the first order with sights and sounds that will not be easily forgotten, this is one of those films that I suspect is going to grow in significance and popularity in due time. Hopefully it will serve as just the first of many collaborations between Stanley and Cage, two decidedly kindred artistic spirits. 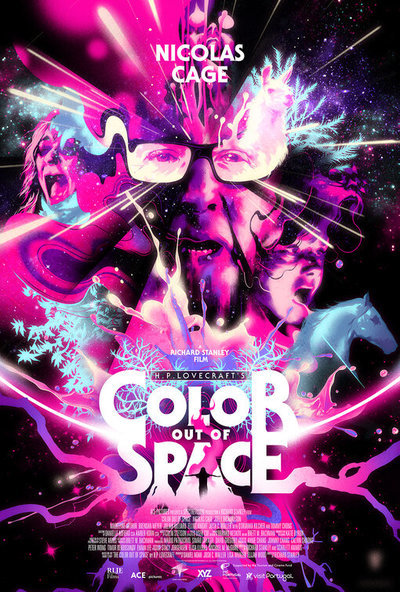