Long before that rascally Bugs Bunny tormented Elmer Fudd in cartoon shorts, British author and illustrator Beatrix Potter’s Peter Rabbit was the gold standard of naughty anthropomorphic carrot crunchers. Dapper in his Edwardian attire of blue jacket and brown slippers, Peter risked life and limb by purloining the produce from Mr. McGregor’s garden patch. His adventure was the first in a series of 23 slim volumes of children’s fables about the secret life of woodland inhabitants, ranging from Mrs. Tiggy-Winkle the washerwoman hedgehog to Mr. Jeremy Fisher the gentlemanly frog.

“The Tale of Peter Rabbit”—first published in 1902—continues to be popular bedtime reading material, not the least because our headstrong hero suffers consequences for his bad behavior. And a sizable reverence still exists for Potter’s writing and her delicately nuanced watercolor portraits of her characters. That may explain the initial uproar over the trailers touting Sony’s 3-D animated “Peter Rabbit,” with live-action actors interacting with digital creatures in a crasser and cruder present-day context. Reactions ran from queasily aghast to utterly revolted when Peter (voiced by James Corden, striving mightily to put the hip in his hop) and a menagerie pulled from Potter’s own pages are shown as rowdy vandals who turn McGregor’s country manor in the scenic Lake District into an actual animal house—trashing the place, employing hedgehogs as darts and twerking their fuzzy tails.

However, this adaptation directed by Will Gluck ("Easy A," the best-forgotten "Annie" remake ) and co-written with Rob Lieber ("Alexander and the Terrible, Horrible No Good, Very Bad Day") remains semi-faithful to the source material—at least for the first 10 minutes or so. After all, it is a fairly short book. In this padded version, the now-orphaned Peter recruits his triplet sisters, Flopsy, Mopsy and Cottontail (spoken by Margot Robbie, Elizabeth Debicki and Daisy Ridley—not that you can tell) along with their chubby cousin Benjamin (Colin Moody), to assist in staging a major heist. The elderly McGregor (Sam Neill, barely recognizable behind a bushy gray beard and extra body padding) is initially oblivious—until he turns off his loud lawn mower. But just when it looks as if he has trapped his prey, the gardener suddenly drops dead. It seems the rake-wielding hot-head was a junk food junkie—oh, the irony, given his struggles to protect his bountiful crops.

That doesn’t happen in the book and neither does what follows. But it allows for an odd mixed-species rivalry with echoes of “Rushmore” to build over the affections of neighbor Bea (Rose Byrne, adding welcome honey to this English brew but under-utilized). She is sympathetic to the rabbits’ need to feed and has a propensity for painting their likenesses. Peter has a crush on her but will soon have to compete with McGregor’s great-nephew, Thomas, an uptight Londoner with control issues who has inherited the house. Initially, I was nervous to learn that Domhnall Gleeson was starring in this. Witnessing his A.A. Milne exploiting his son forever made me feel guilty about ever liking Winnie-the-Pooh after "Goodbye Christopher Robin." But despite sharing his uncle’s deep-rooted disdain for wildlife, which he hides from Bea, it is Thomas who we begin to feel sorry for as the increasingly belligerent Peter goes from likably cheeky chap to sneering sadist as he tries to torture his enemy by repurposing McGregor’s animal traps, electric security devices and explosives as weapons of ever-escalating destruction in the mode of "Home Alone."

The quaint production values are high quality and the animated likenesses of Peter and his buddies are believable. But while some pandering to 21st-century sensibilities is to be expected, Gluck and Lieber cheapen matters considerably by inserting various sub-par pop references (“That’ll do pig— that’ll do” from "Babe," the slo-mo group gangster stroll from "Reservoir Dogs," songbirds that rap, launching tomatoes like hand grenades while leaping across the screen sideways, Bayhem-style). They also like some of their jokes so much, they are compelled to repeat them. There’s a cock-a-doodle loon of a rooster who is perpetually gob smacked to witness that another day has dawned. Peter derides Benjamin’s brown jacket for being too “matchy-matchy” with his same-hued fur a couple of times. Then there is that old fave—a deer paralyzed in its own tracks while staring blankly into headlights—that is also deemed worthy of a double play.

It’s true that many of the young kids in the crowd were laughing raucously at the slapstick escapades. And, yes, Peter eventually does the right thing and makes peace with the humans. Clearly there is a severe case of “Paddington” envy here and a hunger for yet another animated franchise. But easy chuckles are no substitute for genuine charm. I’m just glad that Corden didn’t insist on doing rabbit burrow karaoke. 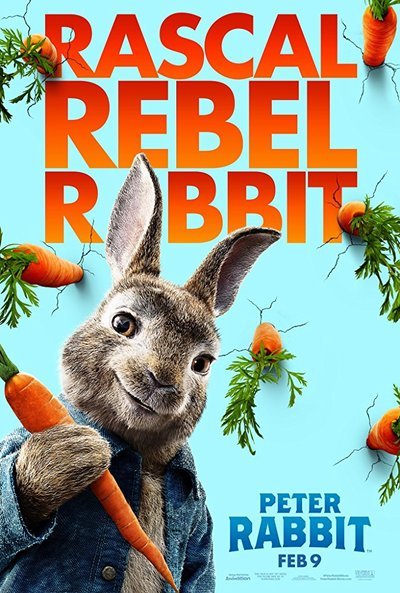 Rated PG for some rude humor and action.

Writer (based on the characters and tales of "Peter Rabbit" by)