I Am the Pretty Thing that Lives in the House

“A house with a death in it can never again be bought or sold by the living. It can only be borrowed by the ghosts who have stayed behind.”

Shortly after that killer opening line, our protagonist Lily Saylor (Ruth Wilson) drops another bombshell when she reveals that she’ll be dead within a year. Osgood Perkins’ “I Am the Pretty Thing That Lives in the House” is an atmospheric take on the haunted house flick that works more with dread and the looming specter of death than the traditional tropes that often define the genre. Sure, there are a couple of moments to make you gasp, but Perkins is working in a more circular, dreamlike manner. The whole film takes place in the house at the end of Teacup Road in Braintree, Massachusetts, and this house is haunted. This is something of which we can be certain. It is one of the few things in this film of which we can be certain.

From the very beginning of his sophomore film (his even-better “February” aka “The Blackcoat’s Daughter” has lingered in distribution purgatory but should be released next year), Perkins is playing with perspective and atmosphere. For example, when we meet Lily, it is on her first day in the house. She says, “The pretty thing you are looking at is me. Of this I am sure. My name is Lily Saylor. I am a hospice nurse. Three days ago I turned 28 years old. I will never be 29 years old.” We hear this in voiceover, although Wilson’s eyes break the fourth wall, staring directly at camera. The omniscient narration that knows its own death, the character who draws us in with her eyes before she’s even spoken—Perkins is playing games with structure and filmmaking. He’s confronting us directly and beginning a sort of circular logic to the film, one in which the dead, the living, and the about-to-die intersect, and we are drawn into the center of this intersection.

Lily has come to this home to take care of an elderly woman named Iris Blum. In a very unspecified time period (although phones are rotary, televisions have rabbit ears, and we see VHS tapes for video and cassette tapes for audio), Lily starts freaking out about the “creepy” old house on night one. She’s essentially alone in that Iris doesn’t speak much, spending her time in bed. We only have one real scene of character exposition early, when Lily is on the phone and we learn that she was almost married once. From then, we flash forward almost a year. And, of course, Perkins knows we’ll remember that narration about Lily not making her next birthday.

It's hard to explain the circular nature of Perkins’ ambitious narrative. Blum is a famous writer, and her most famous book is called The Lady in the Walls, featuring a lead character named Polly. From the beginning, Iris calls Lily by the name Polly, and the frightened lead eventually cracks open the famous book, leading to a few scenes that are either direct adaptations of that story, flashbacks to something that happened in the house, or a dream/vision of some sort. Who knows? Perkins is never quite that literal, sometimes frustratingly so but mostly in a way that reveals his deep ambition as a storyteller. Most importantly, this is not a film to be “solved.” It is a mood piece made by someone constantly playing with structure, but never in a way that calls overt attention to itself. For example, when Lily starts reading The Lady in the Walls, the opening line is almost exactly the same as when she came to the house—“The pretty thing you are looking at now is me.” Why? Are Lily/Polly the same? And how did Iris write about them? What does that mean?

There are traditional haunted house elements in Perkins’ film like a mold problem that hints at something hidden in the walls and a use of reflection to produce a scare, but it almost feels like Perkins uses those just to keep tethered to a genre with which he wants to do something far more ambitious. What is a haunted house movie about if not death? Sure, the bad ones are often about jump scares and poor CGI, but we fear haunted houses because they remind us of mortality and force us to question that which we know about it. “I Am the Pretty Thing That Lives in the House” isn’t about ghosts as much as it’s about death—the one coming soon for the homeowner, the one of the protagonist in her book, the one we’re told is coming for its protagonist. And all of these deaths swirl around to the point that they hang in the air, creating dread.

In many ways, “I Am the Pretty Thing That Lives in the House” feels more like a first film than “February” in that its ambitions sometimes feel a bit out of reach for the final product. It’s something that might have worked even better as a short film or an episode of an anthology series, as one can feel it stretching to meet a short running time. In simple terms, it feels more like a short story than a novel. However, it’s a short story that I immediately started again, already getting more out of the first act than I did the first time. It’s a movie that’s too opaque and unusual for some viewers, but those who do give in to its unique rhythms and approach will find something often haunting and ultimately rewarding. 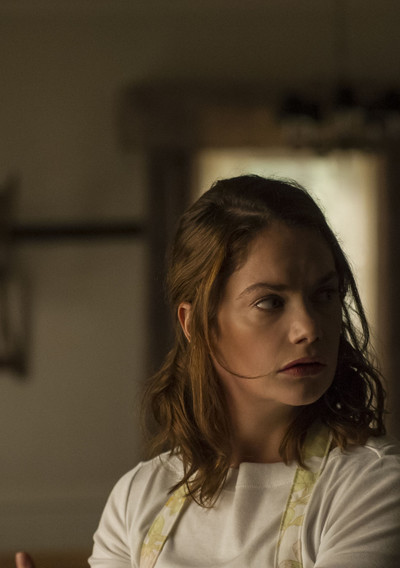