If "The Turning” leaves you screaming, it’ll probably be out of frustration over its abrupt, unsatisfying ending and not the actual frights that precede it.

This latest version of Henry James’ classic, oft-adapted novella “The Turn of the Screw” gets a grunge makeover, radiating style and mood in the hands of director Floria Sigismondi. The music video veteran—whose clips for Marilyn Manson’s “The Beautiful People” and Justin Timberlake’s “Mirrors” are just a couple of prime examples in her lengthy filmography—creates an unsettling vibe that’s quickly and deeply immersive. The James source material, which most notably has been adapted as 1961’s “The Innocents” starring Deborah Kerr, is straight-up Gothic horror. Its setting is a chilly, sprawling mansion where things go bump in the night, windows and doors slam shut on their own and whispers down dusty hallways eventually turn to screams.

Clearly, nothing good will happen here, despite the elegant trappings. But the imagery eventually grows repetitive—you can only see so many skittering spiders and severed doll heads—and the talented supporting performers reach a limit as to what they can convey about their characters in the script from “The Conjuring” writers Chad Hayes and Carey W. Hayes. Then there’s that ending, which feels like a sudden shriek, and a shrug.

Initially, though, Mackenzie Davis is full of optimism as Kate, a kindergarten teacher excited about her new job as a live-in instructor and governess for a young orphan. (This is an extremely different nannying gig than the one Davis had in “Tully.”) The setting has been updated to the somber spring of 1994, as we see from television coverage of Kurt Cobain’s death, but Kate is nothing but upbeat. “I’m going from 25 screaming kids to one little girl,” she tells her skeptical roommate. “How hard could it be?”

But once Kate arrives at the foreboding estate, she soon realizes she has more to deal with than her precocious charge, the sunny second-grader Flora (“The Florida Project” star Brooklynn Prince). She also must contend (and compete for authority) with the home’s longtime housekeeper, the angular and antagonistic Mrs. Grose (Barbara Marten). Soon, Flora’s arrogant teenage brother, Miles (Finn Wolfhard of “Stranger Things”), shows up unexpectedly from boarding school with some secrets of his own. And eventually, the legend of what happened to Flora’s previous teacher, as well as the riding instructor with whom Miles had forged a strong bond, comes into sharper focus.

Sigismondi, with just her second feature following the 2010 rock biopic “The Runaways,” establishes Kate’s feeling of isolation early and often, shooting her from a distance on the estate grounds, her bright, red coat providing a striking contrast with the home’s cold, gray facade. It’s a perpetually cloudy place, where a leisurely stroll past the koi pond or a horseback ride in the woods are opportunities for dread rather than joy. Cinematographer David Ungaro works deftly within the many creepy corners of the cavernous estate—hidden hallways, an abandoned sewing room, a garishly wallpapered bathroom—all of which hint at a deeply rooted evil that never truly materializes. And the dark strings of composer Nathan Barr’s score are a key factor in putting us on edge.

Davis, meanwhile, convincingly suggests her character’s descent into madness; whether the origin is internal or the result of her surroundings is the film’s ultimate question. You can see her growing more frail and frazzled each morning after yet another restless night. It’s a physically and emotionally demanding role, and Davis is up for every challenge. The look on her face as Kate begins to realize exactly what she’s gotten herself into—and can’t get out of for a variety of reasons—is quietly chilling. Prince provides an eerily spritely presence without a trace of child-actor cuteness, and Wolfhard continues to display his versatility with this surly and subversive portrayal.

“The Turning” suggests the devastation that can linger as a result of childhood trauma, and its players seem game to go deeper, but ultimately the film only scratches the surface of this thorny subject. 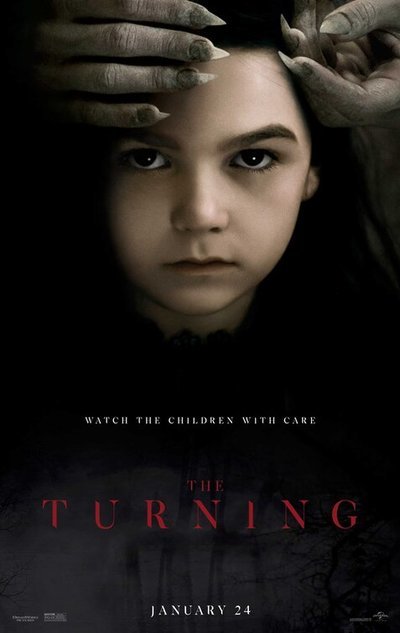