“Underwater” is the kind of no-nonsense B-movie with an A-list cast that Hollywood used to make more often. It's a lean and mean film that gets you into its action instantly and then doesn’t release the pressure until the ending credits. In an era of increasingly long blockbusters with pretensions of greatness, it’s refreshing to see a tight movie that knows exactly what it needs to do and sets about doing it. Anchored by another impressive performance from Kristen Stewart and really effective cinematography from Bojan Bazelli, “Underwater” absolutely bullies you into liking it. There's no time not to. Some of the midsection succumbs to incoherent effects in which the murky setting overwhelms the ability to actually be able to tell what the heck is going on, but the flaws of the film never linger long enough to, sorry, sink “Underwater.”

Stewart plays Norah, a worker on an underwater research site that’s literally miles below the surface. An annoying opening narration that feels tacked on by a producer during the film's delayed post-production details how time starts to lose all meaning when you’re that far underwater. There’s no light and you sometimes can’t even tell if you’re awake or dreaming. Just about then, while you're still trying to find your seat in the theater, all hell breaks loose. The hull of the rig starts to crack and explode. Norah runs to safety, eventually finding other survivors that include characters played by Vincent Cassel, Mamoudou Athie, John Gallagher Jr., Jessica Henwick, and T.J. Miller. That’s it. It’s six people trying to survive a catastrophe that has killed the hundreds of other people aboard the site. No shots of emergency crews on the surface. No flashbacks. The escape pods have either been used or destroyed. Their only hope is to literally walk a mile along the ocean floor to another site and hope there are pods that work there. Then they discover they’re not alone.

Yes, “Underwater” is half disaster movie and half monster movie, combining two B-movie genres that I’ve always loved. As “Underwater” shifts from something more akin to “The Poseidon Adventure” to a submerged riff on “Alien,” the transition doesn’t always work but director William Eubank directs his cast to incredibly strong in-the-moment performances that hold it together. We need to believe Norah’s plight, and Stewart sells the immediacy of her waking nightmare, well-assisted by Henwick and Cassel in particular. (On the other hand, Miller’s schtick gets old fast, but that’s the only weak link). The writers tack on a few too many manipulative back stories to try to heighten the emotional stakes, but that’s commonplace in both genres on which “Underwater” is riffing.

It also helps that the producers of “Underwater” tapped the eye of the great Bojan Bazelli to shoot the film. The cinematographer behind “A Cure for Wellness” and “The Ring” knows how to build tension with a combination of extreme close-ups that put us inside Norah’s helmet while never losing the geography of where these people are fighting against incredible odds. When the movie becomes a full-out monster flick, Bazelli and Eubank could have dialed down the underwater murk a few degrees, but it’s still an effective film visually, the value of which cannot be understated. Most bad B-movies like “Underwater” rely on a steady diet of jump scares and shaky camerawork to disguise their low budgets and lack of visual acuity. What sets this apart is that there’s an artistry to the visuals and captivating sound design. The film is filled with flashing lights of broken or breaking equipment and the din of metal creaking under the pressure of water. It’s all necessary to enhance the tension.

What I think I responded to the most in “Underwater” is its relentlessness. It’s almost real time for at the least first chunk of the movie, and the immediacy of the filmmaking gives it power. "Underwater" discards all that on-the-surface nonsense that worse movies would have forced viewers through, in which we meet the characters and foreshadow weird happenings underwater. There’s no time for that. Don’t show up late. It’s a film that’s about panic, and how unexpected heroes can be made through instinctual response to adversity. That, and underwater monsters.

The final act of “Underwater” will likely divide some people, but I’m a fan of when a B-movie really goes for it, and there are a few beats in this one’s final scenes that are impressively ambitious. My kids are at an age where they’re fascinated by the idea that there could be species so far below the ocean’s surface that we have yet to identify them. When they’re old enough, I’ll show them “Underwater.” Maybe they’ll like B-movies too. 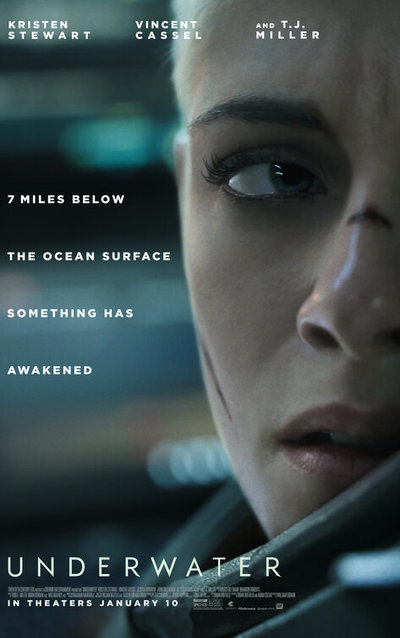