Film critic Jürgen Fauth on his anthology "Raves", and why he quit reviewing

Editor's note: Jürgen Fauth, longtime film critic for About.com, was born in Germany, raised in the United States, studied creative writing and film in both countries, and settled in Germany in the '90s. He is a fiction writer, editor and translator who co-founded the German-language literary magazine Der Brennende Busch as well as Fictionaut and published the visionary novel Kino, which is suffused by his obsession with cinema. He built an identity in his birth country as a film critic of wide-ranging tastes. His typically short, punchy reviews occasionally veered from the gist of things, and examined the style and structure of films with an acuity rarely seen in mainstream criticism.

Fauth has just published his first collection of criticism, "Raves," which you can order here. You can follow him and his writing at his blog Muckworld.

Matt Zoller Seitz: Tell me about how you got started in movie criticism.

Jürgen Fauth: I started writing reviews for my hometown newspaper, the Wiesbadener Kurier, in the early '90s, when I was a student. I’d see the movie with the critic from the rival newspaper, then peck out my review on a manual typewriter.

Do you remember the first review you ever got paid to write?

They sent me to the "weird" movies their main critics didn’t want to bother with. I’m not sure which was the first one—maybe "The Ghost," by Herbert Achternbusch? They paid, and they let me tackle bigger movies little by little.

I didn't realize you started out at a traditional ink-on-paper publication. Tell me a little bit about the newspaper. How did you get a job there? What sort of publication was it? What sorts of things did you learn there?

I started in 1990—just called them up and said, “I think I’d like to write about movies.” They invited me in, and the editor, whose name was Horst Goschke, gave me a speech about how I had to judge a movie by how well it achieved its intentions rather than my own taste. The WK was the main paper for a town of about 300,000, and I remember it was a huge kick to get on the bus on Friday morning and see people read the newspaper. 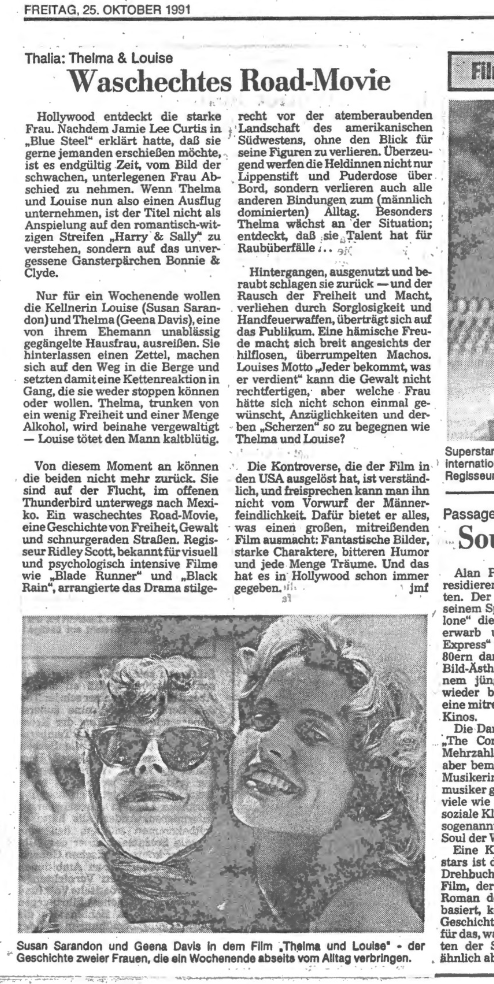 You've been doing this for a long time, which presents a problem when you're putting together an anthology like “Raves”: what not to include? It seems like you have chosen movies that for one reason or another stuck in your mind, perhaps for reasons of style or subject or tone, and not so much for whether they're milestones in art or commerce. You've got Rian Johnson's "Brick" in there, and "Coraline," and quite a long, good piece on "Che," and the through-line is, it seems to me that you really seem to enjoy taking apart the inner workings of a movie.
Advertisement

The key idea for the collection was to pick the most enthusiastic reviews. I always liked the job best when I could recommend something highly, so I literally went down the list, looked at all the four or five star reviews I'd published, and then started whittling it down. Maybe the more distinctive movies are the ones I always got most excited about?

It sure seems that way. I don't see any reviews in here that seem to have been included just because the subject matter was important or because the film won a lot of Oscars.

I don’t think I ever cared about that. I like to think of myself as an omnivore who doesn’t discriminate by genre or any other external marker. Come to think of it, maybe that’s what Horst Goschke meant — don’t worry about if you like "that sort of thing", whatever it is, just be open and see if it succeeds on its own terms.

The notion of a film succeeding on its own terms—that's something Roger Ebert used to insist that he kept in mind when reviewing, which explains why he could give four stars to "Shoah" but also to "Lethal Weapon."

There you go. Maybe that’s where my editor got it from. By the same token, you have "Uncle Boonme who Can Recall His Past Lives" and "Revenge of the Sith" in here.

Yes, and—as you know, because you and I first bonded over this movie years back—I am very excited that you have the piece on "Revenge of the Sith" and the "Star Wars" prequels in there. It’s such a full-throated defense of—well, not the totality of the trilogy, but certain aspects of it, specifically the intricate structure—how Lucas makes sure every scene or sequence mirrors something in the original trilogy. That's something no other film critic at the time noticed, because they were too busy making fun of the dialogue.

Right. And you point to something I started to notice more and more, how critics sometimes mistake observation for judgment. Yes, the dialogue in the “Star Wars” movies  is "wooden" — I think we can all agree on that. But instead of asking why that is, what purpose it might serve, a lot of people used it as a reason to dismiss those movies.

And I started catching myself doing it with other films—I’d see something, and I’d jump to a conclusion about it. I got more and more wary of that first impulse. I like to notice things about movies, but I don’t much care for the act of judging any more.

Let's talk about that. You write in your introduction to "Raves": "The more I learned about crafting reviews, the harder it became. This is true of most kinds of writing, but eventually I reached the point where the work of formulating an opinion began to overshadow the joy I took in watching movies in the first place — and it just didn’t seem worth it anymore. When I first started writing reviews for the web, there were only a handful of us, and we took movies very seriously. But as the decade wore on and online criticism exploded, my work felt increasingly redundant. It's easy now to find diverse, nuanced, well-stated opinions on even the most obscure art film or re- release. Why add to the noise?"

It’s such an exciting thing to do—if you love movies, and you love writing, what could be better than writing about movies? I felt that way for a very long time. But eventually I fell out of love with it. It happened slowly, but there were a few key moments I can point to.

The big turning point came 2008, the year I went to the Berlin Film Festival for the first time. I’d been to plenty of festivals before, but nothing on that scale, and I was absolutely overwhelmed. I’m still pretty happy with the pieces I wrote in Berlin, so in a way it was the high watermark of my career as a critic, but at the same time it was the moment I realized how far I had to go. I met some very accomplished critics there who’d truly dedicated their lives to cinema, and I didn’t quite recognize myself in that.

At the same time, Google retooled its search algorithms. As a result, my reviews got a whole lot harder to find, and I suddenly made significantly less money. In my memory, this happened the week I got back from Berlin.

Those were the practical kinds of reasons—the sense that if I wanted to stay a serious film critic, I’d have to absolutely dedicate myself to it.

At the same time, I was hard at work on my debut novel, and I think I started thinking more and more like a writer and less like a critic.

What do you mean, "more like a writer and less like a critic"? That's an interesting phrase.

Well, you said something earlier about the way I’ve always liked to dissect movies. All along, I think I was teaching myself things about structure and storytelling, things to use in my own work.

I also felt more and more humbled by the work. Once you’ve spent years, literally years of your life, on one creative project, you get a much better idea of what goes into it. It got harder and harder for me to watch a film and then judge it that afternoon. I think a part of me began to respect the work too much, and I got more and more careful about what I said about it.

It almost sounds like you were becoming intimidated about passing judgment on creative work once you started doing more of it yourself.

It takes a certain confidence to not just have an opinion but also deem it worthy of broadcasting. You have to muster this authority to say, this is worthy, this isn’t. And yeah, I found that more and more difficult, especially with the negative reviews. My attitude started to change to, who’s to say? It’s not for me, but hey, if someone likes it, that’s fine with me.

And once that starts happening, you’re probably finished as a critic.