"There is no proper response to this film."

For more than nine hours I sat and watched a film named "Shoah," and when it was over, I sat for a while longer and simply stared into space, trying to understand my emotions. I had seen a memory of the most debased chapter in human history. But I had also seen a film that affirmed life so passionately that I did not know where to turn with my confused feelings. There is no proper response to this film. It is an enormous fact, a 550-minute howl of pain and anger in the face of genocide. It is one of the noblest films ever made.

They talk and talk. "Shoah" is a torrent of words, and yet the overwhelming impression, when it is over, is one of silence. Lanzmann intercuts two kinds of images. He shows the faces of his witnesses. And then he uses quiet pastoral scenes of the places where the deaths took place. Steam engines move massively through the Polish countryside, down the same tracks where trains took countless Jews, gypsies, Poles, homosexuals and other so-called undesirables to their deaths. Cameras pan silently across pastures, while we learn that underneath the tranquility are mass graves. Sometimes the image is of a group of people, gathered in a doorway, or in front of a church, or in a restaurant kitchen.

Lanzmann is a patient interrogator. We see him in the corners of some of his shots, a tall, lanky man, informally dressed, chain-smoking. He wants to know the details. He doesn't ask large, profound questions about the meaning of the extermination of millions of people. He asks little questions. In one of the most chilling sequences in the film, he talks to Abraham Bomba, today a barber in Tel Aviv. Bomba was one of the Jewish barbers ordered to cut off the hair of Jewish women before they were killed in Treblinka. His assignment suggests the shattering question: How can a woman's hair be worth more than her life? But Lanzmann does not ask overwhelming and unanswerable questions like this. These are the sorts of questions he asks:

You cut with what? With scissors?

There were no mirrors?

You said there were about 16 barbers? You cut the hair of how many women in one batch?

The barber tries to answer. As he talks, he has a customer in his chair, and he snips at the customer's hair almost obsessively, making tiny movements with his scissors, as if trying to use the haircut as a way to avoid the questions. Their conversation finally arrives at this exchange, after he says he cannot talk any more:

Q. You have to do it. I know it's very hard. I know and I apologize.

Lanzmann is cruel, but he is correct. He must go on. It is necessary to make this record before all of those who were witnesses to the Holocaust have died.

His methods in obtaining the interviews were sometimes underhanded. He uses a concealed television camera to record the faces of some of the old Nazi officials whom he interviews, and we look over the shoulders of the TV technicians in a van parked outside the buildings where they live. We see the old men nonchalantly pulling down charts from the wall to explain the layout of a death camp, and we hear their voices, and at one point when a Nazi asks for reassurance that the conversation is private, Lanzmann provides it. He will go to any length to obtain this testimony.

He does not, however, make any attempt to arrange his material into a chronology, an objective, factual record of how the "Final Solution" began, continued and was finally terminated by the end of the war. He uses a more poetic, mosaic approach, moving according to rhythms only he understands among the only three kinds of faces we see in this film: survivors, murderers and bystanders. As their testimony is intercut with the scenes of train tracks, steam engines, abandoned buildings and empty fields, we are left with enough time to think our own thoughts, to meditate, to wonder.

This is a long movie but not a slow one, and in its words it creates something of the same phenomenon I experienced while watching "My Dinner With Andre". The words themselves create images in the imagination, as they might in a radio play. Consider the images summoned by these words, spoken by Filip Muller, a Czech Jew assigned to work at the doors of the gas chambers, a man who survived five waves of liquidations at Auschwitz:

A: You see, once the gas was poured in, it worked like this: It rose from the ground upwards. And in the terrible struggle that followed - because it was a struggle - the lights were switched off in the gas chambers. It was dark, no one could see, so the strongest people tried to climb higher. Because they probably realized that the higher they got, the more air there was. They could breathe better. That caused the struggle. Secondly, most people tried to push their way to the door. It was psychological; they knew where the door was; maybe they could force their way out. It was instinctive, a death struggle. Which is why children and weaker people and the aged always wound up at the bottom. The strongest were on top. Because in the death struggle, a father didn't realize his son lay beneath him.

Q. And when the doors were opened?

A. They fell out. People fell out like blocks of stone, like rocks falling out of a truck.

The images evoked by his words are unutterably painful. What is remarkable, on reflection, is that Muller is describing an event that neither he nor anyone else now alive ever saw. I realized, at the end of his words, that a fundamental change had taken place in the way I personally visualized the gas chambers. Always before, in reading about them or hearing about them, my point of view was outside, looking in. Muller put me inside.

That is what this whole movie does, and it is probably the most important thing it does. It changes our point of view about the Holocaust. After nine hours of "Shoah," the Holocaust is no longer a subject, a chapter of history, a phenomenon. It is an environment. It is around us. Ordinary people speak in ordinary voices of days that had become ordinary to them. A railroad engineer who drove the trains to Treblinka is asked if he could hear the screams of the people in the cars behind his locomotive.

A. Obviously, since the locomotive was next to the cars. They screamed, asked for water. The screams from the cars closest to the locomotives could be heard very well.

Q. Can one get used to that?

A. No. It was extremely distressing. He knew the people behind him were human, like him. The Germans gave him and the other workers vodka to drink. Without drinking, they couldn't have done it.

Some of the strangest passages in the film are the interviews with the officials who were actually responsible for running the camps and making the "Final Solution" work smoothly and efficiently. None of them, at least by their testimony, seem to have witnessed the whole picture. They only participated in a small part of it, doing their little jobs in their little corners; if they are to be believed, they didn't personally kill anybody, they just did small portions of larger tasks, and somehow all of the tasks, when added up and completed, resulted in people dying. Here is the man who scheduled the trains that took the Jews to die:

Q. You never saw a train?

A. No, never. We had so much work, I never left my desk. We worked day and night.

And here is a man who lived 150 feet from a church where Jews were rounded up, held and then marched into gas vans for the trip to the crematoriums:

Q. Did you see the gas vans?

A. No . . . yes, from the outside. They shuttled back and forth. I never looked inside; I didn't see Jews in them.

What is so important about "Shoah" is that the voices are heard of people who did see, who did understand, who did comprehend, who were there, who know that the Holocaust happened, who tell us with their voices and with their eyes that genocide occurred in our time, in our civilization.

There is a tendency while watching "Shoah" to try to put a distance between yourself and the events on the screen. These things happened, after all, 40 or 45 years ago. Most of those now alive have been born since they happened. Then, while I was watching the film, came a chilling moment. A name flashed on the screen in the subtitles, the name of one of the commandants at Treblinka death camp. At first I thought the name was "Ebert" -- my name. Then I realized it was "Eberl." I felt a moment of relief, and then a moment of intense introspection as I realized that it made no difference what the subtitle said. The message of this film (if we believe in the brotherhood of man) is that these crimes were committed by people like us, against people like us.

But there is an even deeper message as well, and it is contained in the testimony of Filip Muller, the Jew who stood at the door of a crematorium and watched as the victims walked in to die. One day some of the victims, Czech Jews, began to sing. They sang two songs: "The Hatikvah" and the Czech national anthem. They affirmed that they were Jews and that they were Czechs. They denied Hitler, who would have them be one but not the other. Muller speaks:

That was happening to my countrymen, and I realized that my life had become meaningless. (His eyes fill with tears.) Why go on living? For what? So I went into the gas chamber with them, resolved to die. With them. Suddenly, some who recognized me came up to me. . . . A small group of women approached. They looked at me and said, right there in the gas chamber . . .

Q. You were inside the gas chamber?

A. Yes. One of them said: "So you want to die. But that's senseless. Your death won't give us back our lives. That's no way. You must get out of here alive, you must bear witness to our suffering and to the injustice done to us."

And that is the final message of this extraordinary film. It is not a documentary, not journalism, not propaganda, not political. It is an act of witness. In it, Claude Lanzmann celebrates the priceless gift that sets man apart from animals and makes us human, and gives us hope: the ability for one generation to tell the next what it has learned. 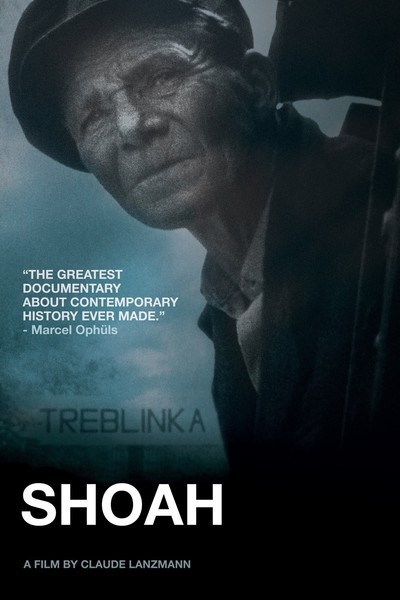