Although not quite the trophy magnet that predecessor Miramax was in its heyday, the 10-year-old Weinstein Company is considered one of the most savvy and, yes, cutthroat competitors in the annual race to Oscar glory. But if Weinstein is the raring-to-hop hare in the field each year, then the stealthier Fox Searchlight is a steadfast tortoise that has slowly but surely become a turbo-charged force to reckoned with, one that is equally adept at using the world spotlight afforded by film festivals like Toronto to its advantage.

While Weinstein leapt into the current decade with back-to-back best-picture wins with “The King’s Speech” and “The Artist,” Searchlight has grabbed the title for the last two years with “12 Years a Slave” and “Birdman.” In addition, it has had six other nominees in the category in those five years since 2010, compared with Weinstein’s five nods: “Black Swan,” “127 Hours,” “The Descendants,” “The Tree of Life,” “The Beasts of the Southern Wild” and “The Grand Budapest Hotel.”

That means the studio arrives at this year’s TIFF with a slight edge. Not only was Searchlight’s “Demolition,” a 2016 drama starring Jake Gyllenhaal, granted the honor of being the opening-night gala premiere. In addition to Davis Guggenheim’s documentary, “He Named Me Malala,” Searchlight has also brought its designated Best Picture contenders, “Brooklyn” and “Youth,” to the fest’s 40th edition after their premieres at Sundance and Cannes respectively.

Meanwhile, Weinstein’s lone TIFF entry is “About Ray,” a timely family drama about a teen girl (Elle Fanning) who wishes to transition into becoming a male. But with “Carol,” Todd Haynes’ lesbian drama that left them swooning at  Cannes, and “The Hateful Eight,” the latest from Quentin Tarantino, in their back pocket, Harvey Weinstein and the gang have little to worry about.

Unfortunately, that can’t quite be said about Searchlight’s current offerings. “Brooklyn” and “Youth” both have their charms, especially some standout performances and visual flair to spare. But when it comes to their narratives, they are both sorely lacking in the type of blow-you-away cinematic audaciousness exemplified by both “12 Years a Slave” and “Birdman.”

Let’s start with “Brooklyn.” About the only thing that is surprising about this nostalgic coming-of-age fable is how it’s told in such a sweet, straight-forward fashion. Based on Colm Toibin’s novel about a naïve Irish lass named Eilis, who survives the rigors of a first-time transatlantic voyage and the pangs of homesickness while blossoming into womanhood in the ‘50s-era Big Apple, it is the perfect transition vehicle for a child star to grow into adult roles.  That is, if the child star were Shirley Temple and Eisenhower was President.

Still, what could easily become your grandmother’s favorite movie of the year at least gives its star, 21-year-old Saoirse Ronan (Best Supporting Actress Oscar-nominee for 2007’s “Atonement”), a chance to show off her native lilt and alluring azure eyes while shining in an immigrant saga that focuses on the fate of an ambitious plucky career girl. If anything lifts “Brooklyn” beyond the ordinary it is Ronan’s ability to deploy her expressive features with aplomb while relaying her character’s inner journey.

But even with a script adapted by the femme-forward Brit writer Nick Hornby (“An Education,” “Wild”), “Brooklyn” follows a rather familiar route as sturdily directed by John Crowley (”Intermission”). Sponsored by a generous Irish priest (Jim Broadbent, twinkly and avuncular as usual), Eilis eventually throws herself into her job as a department-store clerk and takes night classes in bookkeeping—turns out, this young lady has a head for math. She also mingles with a flock of chirpy girls while staying at a boardinghouse overseen by the amusingly opinionated Mrs. Keough (the always-welcome Julie Walters, who makes the most of such pronouncements as, “A giddy girl is the eighth deadly sin”).

Both the movie and Eilis become much more interesting, however, when romance enters the picture. Emory Cohen manages to combine the boyish good looks of the young Ralph Macchio and the blue-collar charisma of Sylvester Stallone in “Rocky” as the Italian plumber of her dreams. Their courtship is a polite one that grows in intensity, especially after Eilis is taught the ways of spaghetti-twirling by her boardinghouse chums before meeting his family. But tragic news from the Emerald Isle forces Eilis return home—and suddenly she faces a difficult decision at a crossroads in her life.

With only a Dickens-esque crone to serve as a villain, “Brooklyn” has little in the way of suspense or tension. But I did appreciate that “Mad Men’s” own resident fashion plate Megan Draper—actress Jessica Pare—generously provides shop-girl mentorship and style advice to Eilis. 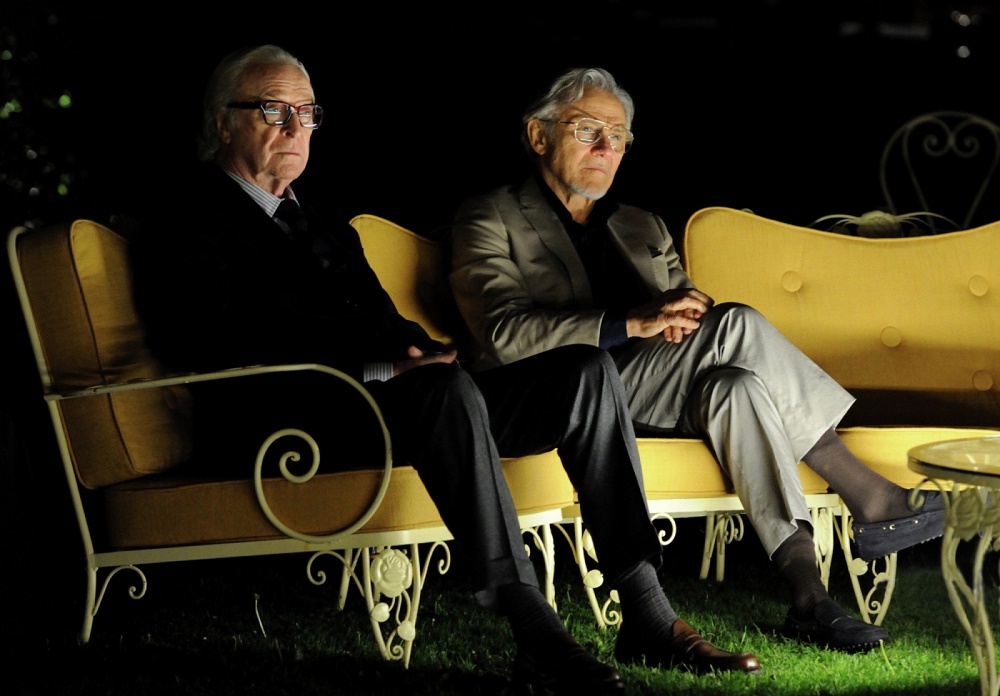 If “Brooklyn” tries too little, Paolo Sorrentino’s “Youth” tries too hard as it channels Fellini at both his most whimsically absurd and garishly grotesque. Shot in rather arch English, this meditation on aging by the filmmaker behind last year’s foreign-language Oscar winner “The Great Beauty” is staged at an obscenely posh Swiss Alpine retreat while focusing on two old friends. Retired British composer-conductor Fred (Michael Caine, whose presence is grace personified) and still-active Hollywood film director Mick (Harvey Keitel, more erudite and suave than usual). They either sit outdoors or stroll about the grounds, talking (and talking some more) about such matters as the women they wished they slept with, their daily struggles to pee regularly and their mutual past when they can remember it.

Other denizens at this shrine dedicated to the pampering of the privileged class include Rachel Weisz as Fred’s assistant and daughter, bereft after learning her husband—Mick’s son—has run off with a flashy rock star nightmare; Paul Dano as an actor who hopes his next movie role will help disentangle him from the signature character from his biggest hit, a robot called Mister. Q; a morbidly obese soccer legend with a portrait of Karl Marx tattooed on his back; Buddhist monks; and a young masseuse with braces on her teeth who likes to ape the moves to a dancing video-game image.

Whatever plot there is propelled by the question at hand: Should Fred honor Queen Elizabeth’s request to come out of retirement to conduct his most celebrated work, “Simple Songs,” and accept her offer of knighthood?

There are an awful lot of scenes involving people of different backgrounds and nationalities lounging about in chairs, beds pools or restaurant tables. Such passiveness would be horribly oppressive if it weren’t Sorrentino’s habit of serving an array of palate cleansers to dazzle our eyes, something amazing, bizarre, beautiful, wondrous or weird. Fred conducts a sort of cow symphony in a pasture, complete with bells and mooing. Mick, meanwhile, has a vision of all the female characters from his works coming to life on a hillside. An eerie steam bath looks like something out of “Dante’s Inferno.” A monk levitates on a hillside. The filmmaker also puts a lot of effort into showcasing the eclectic nightly entertainment at the mountain getaway, from lounge singers to odd instrumentalists to fire-eaters and bubble-making mimes.

But the most jaw-dropping sights are provided by two actresses. Madalina Diana Ghenea is a Romanian model who might have inspired the term drop-dead gorgeous if it hadn’t already existed. She lives up to her brief part as the reigning Miss Universe with a slow, languid, totally nude stroll into a pool before a stunned if appreciative Fred and Mick. Meanwhile, Jane Fonda grabs “Youth” by the throat (or perhaps by the groin) and gives Mick a heated tongue-lashing before the film reaches its grand finale. Looking like a Ray Harryhausen gorgon if played by Faye Dunaway as Joan Crawford in “Mommie Dearest,” her movie legend Brenda Morel is a roaring beast of a Hollywood survivor who shakes up the proceedings in the nick of time. Oscar can be fond of such short yet showy outbursts and it would be justice if Fonda made the cut on the ballot.

Judging by its TIFF slate, Fox Searchlight might not be quite as much of an awards shoo-in as in the past, but at least it isn’t playing it safe.