It's both frustrating and exciting to see Italian filmmaker Paolo Sorrentino persistently compared to Federico Fellini. The comparison is warranted, to an extent. Like Fellini, Sorrentino ("This Must Be the Place," "The Consequences of Love") has a baroque and immersive style. He also has a carnivalesque/sideshow sense of humor: his new film "The Great Beauty" features, amongst other things, a self-described "dwarf" and a nun with two crooked teeth. Also like Fellini, Sorrentino's fascinated by contemporary society's obsession with looking young and energetic.

"Beauty" can be read as an update of "La Dolce Vita," but while it is definitely Fellini-esque, it's also a crystallization of Sorrentino's own distinctive style. This 43-year-old filmmaker is a major talent. Though he may not be the second coming of Fellini, his films all have a funny, refreshingly complex perspective, and his latest work is a perfect example of why he is the next big Italian thing.

"The Great Beauty" is a character study that presents contemporary Rome through the eyes of Jep Gambardella (the brilliant Toni Servillo), a simultaneously overstimulated and underwhelmed taste-making intellectual. Jep is a writer, though he doesn't really write. His first and only novella disappeared into obscurity. He spends his time performing as a public figure, a fixture of the city. He wants to remain young and important for as long as he can (he's 65), so he uses botox. But he also mocks anyone who makes vague, pseudo-intellectual claims about ethics, art, and staying young.

On a basic level, Jep recognizes in himself everything that's provincial and ugly about Rome. But through bon mots and helpless smirks, he breezes through life, looking for an elusive source of inspiration. He seems to find it in Ramona (Sabrina Ferili), a whip-smart stripper, but their romance is insubstantial. "The Great Beauty" is Jep's show. He's clever enough to know what his problems are, but not ready to solve them yet.

Jep is morbidly self-involved, but Sorrentino excels at subtly navigating the contradictions that either undermine or support his persona. People come and go in Jep's life. They all make him a little wiser, even if they don't realize it. Airhead celebrities talk about Marcel Proust. A lecherous old man hisses, "I want to fuck you" at a bevy of spray-tanned twentysomethings. Then there's Ramona, a woman smart enough to call Jep out when he blames his boredom and writer's block on living in Rome.

Jep is like Sorrentino's other great protagonists: impotent, charming but smug men who can't bear the thought of starting over. Jep casually boasts about how comfortable he is in his environment, but he also hopes that there's more to life than what he already knows. He grapples with many of the same preoccupations as the heroes of Sorrentino's other films. He is, to use an image from Sorrentino's "One Man Up," a big fish circling his own private fishbowl. His prison is defined by clipped and cutting arguments and visually rapturous tracking shots.

Sorrentino overwhelms viewers with information, but each scene is constructed with such care and attention that it's easy to miss that each new scene elaborates on Jep's latest theory or dilemma. His character arc is engrossing because it's not just full of complex ideas, thanks to Sorrentino and Umberto Contarello's screenplay, but visual beauty as well, courtesy of Luca Bigazzi's cinematography.

More importantly, Servillo, a frequent Sorrentino collaborator and a theatrically-trained actor, makes Jep arresting. He's like an Italian Tom Wolfe. You hang on his every word, even when you're about to hear something gossipy and mean-spirited, because you know it'll probably be true, or at least well-said. A subtle brittleness defines Servillo's performance, and it only comes out when he wants it to. He and Sorrentino are both at their best in "The Great Beauty," making comparisons to Maestro Fellini's work at once inadequate and appropriately grandiose. 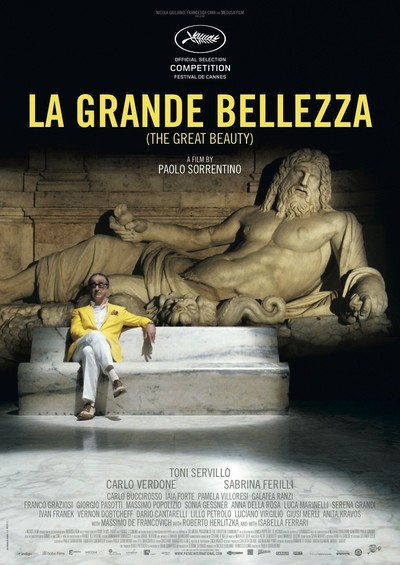