Here is a movie where the characters discover that brown steak sauce tastes great in coffee, where a TV producer wants "more reality" after filming a rabbit race, where a cop's car is stolen while he's carrying out a drug bust, where . . . but "Intermission" goes on and on, in a tireless series of inventions, like a plot-generating machine in overdrive. That it succeeds is some kind of miracle; there's enough material here for three bad films, and somehow it becomes one good one.

The movie is a dark comedy — no, make that a dark, dark, dark comedy — set in Dublin and starring more or less everyone in town. That its cast includes Colin Farrell, now a big movie star, is less remarkable than the fact that the cast is so large and colorful that we sometimes lose track of him. Here is yet more evidence that "Pulp Fiction" was the most influential movie of recent years, as eccentric characters with distinctive verbal styles coil around a plot involving romance, betrayal, kidnapping, bank robbery and a lot of brown sauce. Whether the sauce is Dad's or HP, the two favorite brands in Ireland, is impossible to say, perhaps because both sauce manufacturers preferred to keep their labels out of this movie.

Like "Pulp Fiction," the movie begins with sweet talk that suddenly turns violent, as Lehiff (Farrell) betrays a hard side. We meet his mates, including John (Cillian Murphy), who hates his job in a supermarket, and Oscar (David Wilmot), who despairs of finding a girlfriend and is advised to target older ladies, who will be grateful for his attention. Meanwhile, John breaks up with his girlfriend, Deidre (Kelly Macdonald), who begins dating married bank manager Sam (Michael McElhatton), while Sam's abandoned wife, Noeleen (Deirdre O'Kane, not to be confused with the character Deidre), goes to a lonely-hearts dance and meets, of course, Oscar.

But to summarize the plot is insanity. There are a dozen major characters whose lives intersect in romance, crime and farce; the screenplay by Mark O'Rowe is so ingenious and energetic that we almost don't feel like we're being jerked around. The other character who must be introduced is Jerry Lynch (Colm Meaney), who has watched too many cop reality shows and thinks he should star in one himself. Oh, and I should mention Sally (Shirley Henderson), who after a tragic disappointment in love has become a recluse and doesn't seem to realize she has enough of a mustache to be referred to occasionally as Burt Reynolds. Her character brings a new dimension to the classic movie scene in which a plain girl is told she would be beautiful if she got rid of the glasses/braces/bangs, etc.

Director John Crowley, a first-timer with enormous promise, seems to know his way through this maze even if we don't, and eventually with a sigh and a smile we give up and let him take us where he will. That will include a kidnapping, which combines the motives of bank robbery and cuckold's revenge, and a bus crash caused by a particularly vile little boy in a red coat who has no connection with the other characters, except that he occasionally turns up and causes horrible things to happen to them.

The movie is astonishing in the way it shifts gears, again like Tarantino. There are scenes of sudden, brutal violence. Scenes of broad comedy (especially involving the detective's attempts to be "CSI" when he was born to be "Starsky and Hutch"). Moments of raw truth, as when an older woman at a pickup bar tells a younger man exactly how she feels. Moments of poignancy, as when John tries to win back Deidre by saying all the things he should have told her in the first place. And moments of exquisitely bad timing, as when the bank manager unzips his pants in the living room just as Deidre's mother walks in.

It's interesting how the stars fit right into the ensemble. Not only Farrell but Meaney have famous faces for American audiences, and devoted moviegoers will recognize Macdonald from "Trainspotting" and Henderson from the wonderful "Wilbur Wants to Kill Himself" (although they will have to be especially devoted in the many cities where "Wilbur" hasn't opened yet). What all of these actors do is fit seamlessly into the large cast, returning in some cases to the accents and body language of their pre-acting days. "Intermission" is a virtuoso act from beginning to end, juggling violence and farce, coincidence and luck, characters with good hearts and others evil to the core. In a movie filled with incredulities, the only detail I was absolutely unable to accept is that brown sauce tastes good in coffee. 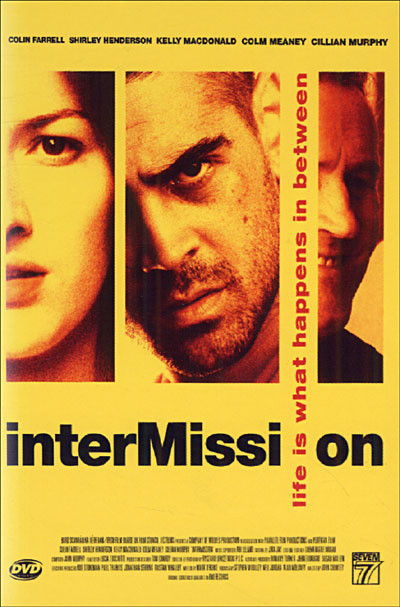