My first two years at Sundance produced some truly memorable Midnight Movie experiences. I’ll never forget the audience response to the general insanity of the final act of “We Are What We Are” or the raucous laughter that greeted “Dead Snow 2: Red vs. Dead” or Gareth Evans’ chapter in “V/H/S/2”. Last year, “The Guest” and “The Babadook” took viewers on very different but very memorable rides and they made waves in the genre when they were released later in the year. Having seen 5/8 of the Midnight offerings this year, I couldn’t be more generally disappointed. Yes, there’s one great one, but it wasn’t a Sundance premiere, and the other four I saw ranged from disappointing to the worst thing I’ve seen in three years at this fest. In fact, arguably the best horror film of the festival actually took up residence in the U.S. Dramatic Competition, leaving the Midnights program feeling even more barren than ever. Let’s start at the top, although it won’t be long before we get close to the bottom.

The best of the horror films I saw for Sundance coverage this year is the one you’re likely to see the soonest, Cannes and Toronto hit “It Follows,” from writer/director David Robert Mitchell. I was speaking with someone in Park City this year about the lack of memorable imagery in this year’s horror offerings and how it is the visual compositions, like Michael standing on the sidewalk behind Laurie in the first “Halloween,” for example, that really sear their way into our memories, and how those were missing this year. And then we both went, “Except for 'It Follows,' of course.” Mitchell’s film is one of the most visually confident horror films of the last decade, as the director doesn’t make the common genre mistake of eschewing artistic compositions for the sake of jump cuts and loud noises. He’s crafted a film with visual motifs—nature, hands, more—that serve as a dense, artistic background for the horror in the foreground. It’s a great movie that should be able to break out of the genre and become a critical crossover hit.

Maika Monroe gives a star-making turn as Jay, a Detroit teen with a good head on her shoulders and supportive friends. In an early scene, we see Jay swimming in her background pool when she notices a couple of neighborhood boys peeking over the fence. In many ways, “It Follows” is about the hidden gaze of those boys, about unseen things that can certainly see us.

Structurally, “It Follows” has been called an “STD Horror Movie,” which is kind of reductive but also kind of true. You see, Jay sleeps with a guy she’s been seeing, which should be a typically harmless sexual encounter, but it becomes much more. After the affair, she’s chloroformed and tied to a chair. Her lover informs her that he’s not going to hurt her but that he needs to be certain that she will take the situation she’s now in deadly seriously. He tells her that their coitus has passed along his curse, if you will, and something, somewhere is now following her. It could take the shape of someone you know, or it could be a stranger, but it is following you, slowly but terrifyingly.

“It Follows” isn’t constructed like a standard American horror film. Mitchell likes long takes, artistic compositions, and untraditional plotting. The very nature of the threat here is unclear. We see a victim in the first few scenes, but what exactly will happen to Jay if “It” catches her is something of a terrifying mystery, allowing our imaginations to fill in the nightmare. Monroe is phenomenal here, in almost every scene and perfectly capturing the arc of a woman whose understandable paranoia begins to break her down. I think the final act is a bit flawed, but I want to see it again to be sure, and just the fact alone that I want to return to this memorable, terrifying world to further dissect and appreciate it is a credit to Mitchell’s skill. 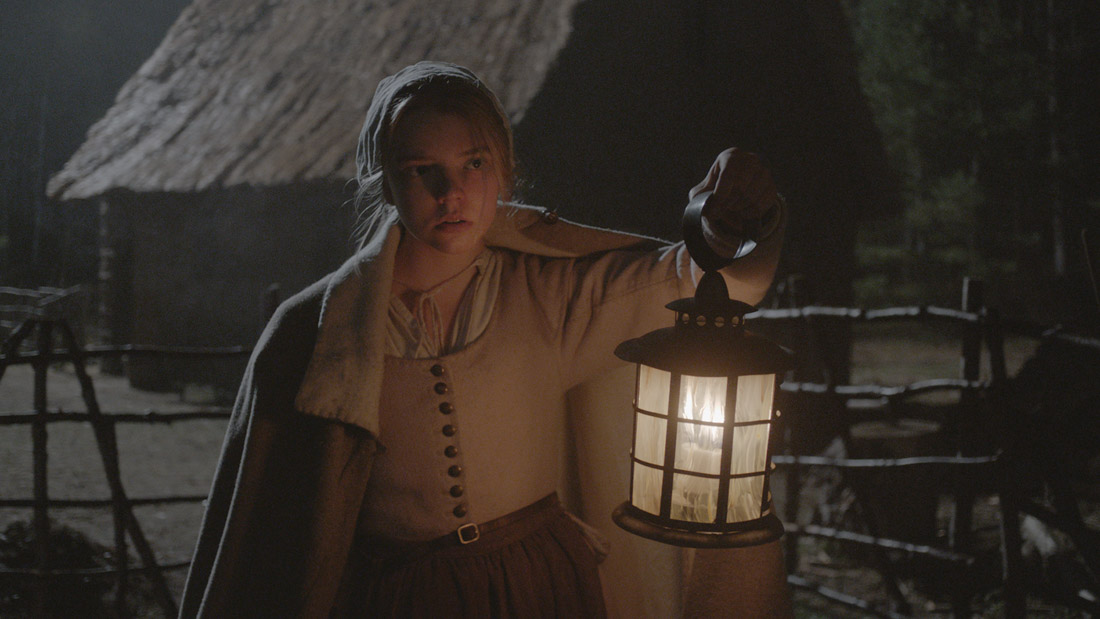 “It Follows” was a known commodity when it took the ride up to Park City, but it was “The Witch” that really had people talking this year, and not just horror fans. Screened in competition, this daring debut from writer/director Robert Eggers is a soul-shaking what-if scenario that uses actual documents of reported activity in the late 1600s in Salem, Massachusetts to posit that perhaps not all the reports of witches in the area were false. A colonial family is cast out of their New England community and forced to set up a small farm on the edge of a foreboding forest. Before you know it, their baby is gone, and that’s just the beginning.

Eggers cleverly uses known witch mythology (there’s discussion of looking for an apple tree, for example) to chronicle a family torn apart from the inside by paranoia and the supernatural. Are they being punished for leaving behind the comfort of their religious community? Out on the fringe of society, are they doomed to be destroyed by the forces of evil? Eggers’ greatest skills are technical, particularly in crafting a sound design that assaults you into a state of fear. The music has the assaultive qualities of Jonny Greenwood’s work on “There Will Be Blood,” unsettling one to the core just in its foreboding tone. And the sound design is stellar, as each crunch of leaves underneath and the sound of wind overhead portends an early demise. There were times when “The Witch” lost me narratively, but it has a cumulative power and a final sequence of scenes that left crowds at Sundance pinned to their seats, afraid to move. 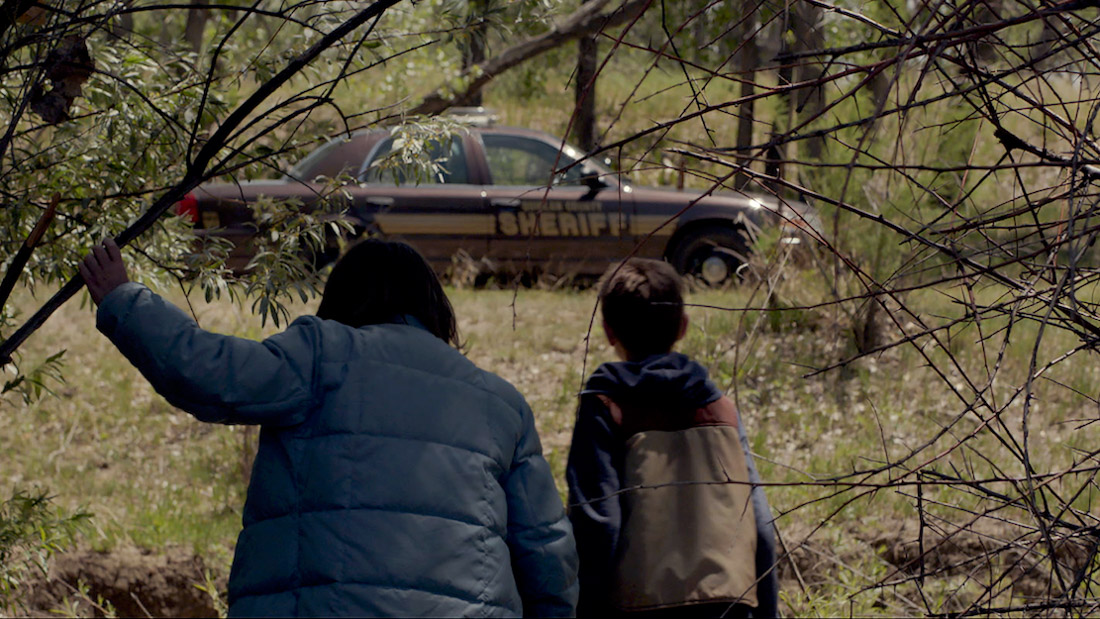 That element of fear is what’s missing from “Cop Car,” a Midnight program offering that should be fun but falls short of justifying a feature-length running time. Fans of Jon Watts’ lean thriller have compared it to ‘80s Amblin films, to which I would argue they are underselling most of the ‘80s Amblin films.

The concept is clever enough. A pair of 10-year-old boys, who open the film taking turns saying dirty words for no reason other than they feel like it, happen upon a cop car in the middle of nowhere. There’s a beer on the hood, but no other signs of life. They also happen to find the keys, and they do what pre-teen boys do—act like idiots. They drive the car across empty fields, and escalate to the point that they’re playing with the firepower the found in the back seat. And then they open the trunk. It’s not really a spoiler to reveal that this is no ordinary abandoned vehicle. In fact, we learn relatively early on that the officer (Kevin Bacon) who left that beer on the hood isn’t a man to be crossed.

For about twenty minutes, “Cop Car” proceeds with a tightly-edited, confident energy, but it sputters out long before the end. It’s a solid, 20-minute short film stretched far beyond its breaking point. There’s a difference between a lean thriller (which is what this was introduced as) and something without any meat on its bones. 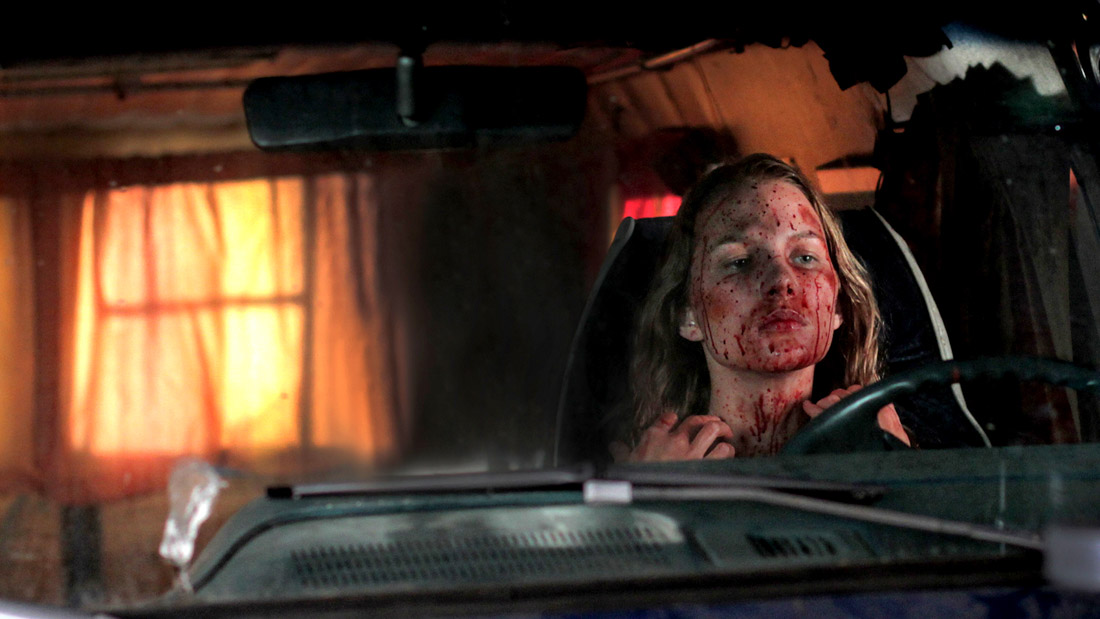 While “Cop Car” can be relatively dismissed as not having enough meat on its bones, it’s certainly better than the rancid meat offered up by “Reversal,” the worst film I’ve seen in three years at Sundance. Where do I start? The zip-cut editing that tries to disguise a complete lack of characters or plot worth caring about? The nonsensical narrative that doesn’t take place in the real world? The offensive, exploitative use of sex crimes as horror movie fodder? The ONLY thing one can loosely hold on to here is a fearless performance by lead Tina Ivlev. One starts to feel sorry that she couldn’t have given it in a movie that anyone should expend any effort to see. If someone offers to pay you to see “Reversal,” ask "How much?"

Ivlev stars as Eve, a young woman who we meet after an indeterminate time chained in a basement. When her captor brings her food, she hits him with a brick, and tries to escape. Before she does, she finds a collection of Polaroids of other victims. Her injured kidnapper tells her that they are still alive in other basements around town. If she kills him, they’ll die of hunger. And so she agrees to take him to the hospital only after he takes her to free the other victims. What ensues is a hideous, morally repugnant adventure through the sex trade by way of “Saw” films and Rob Zombie’s visual style. It’s too repulsive to write about further. 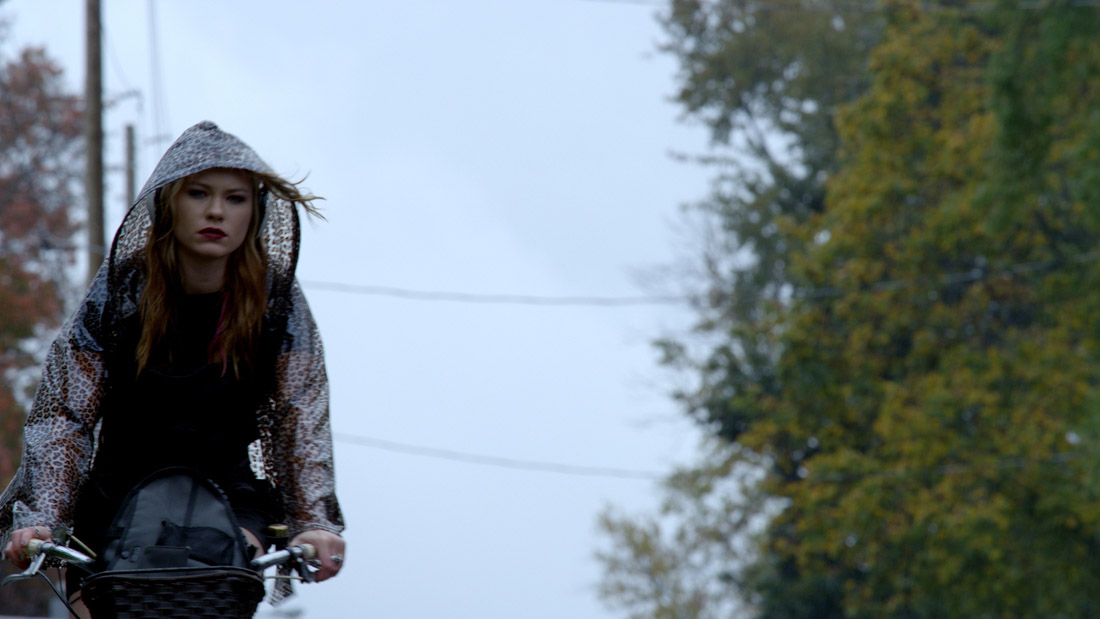 Bruce McDonald’s “Hellions” may not be as morally repugnant as “Reversal” but it is similarly misguided in its structure and narrative choices. It starts promisingly enough. A young woman (Chloe Rose) finds out she’s unexpectedly pregnant on Halloween. She waits for her boyfriend to arrive to take her out after her mother and brother head out trick or treating. With very little warning (or sense of movie logic at all), she’s beset upon by creatures masquerading as trick or treaters looking for a lot more than candy. It’s kind of like “Rosemary’s Baby” meets “The Strangers,” although that makes it sound a lot more fun than it is.

McDonald, to his credit, really goes for it, departing the real world very early with bright color choices and nearly Lynch-ian fantasy sequences. For example, shortly after her first encounter, a windstorm picks up inside the house. Before you know it, the sky is an unnatural color and we have completely departed the real world. It’s a massive misstep. “Hellions” could have worked as a more grounded pregnancy scare tale crossed with a home invasion flick, but it’s not really either. It’s more of a supernatural oddity, a movie that gets increasingly more annoying instead of actually producing scares. 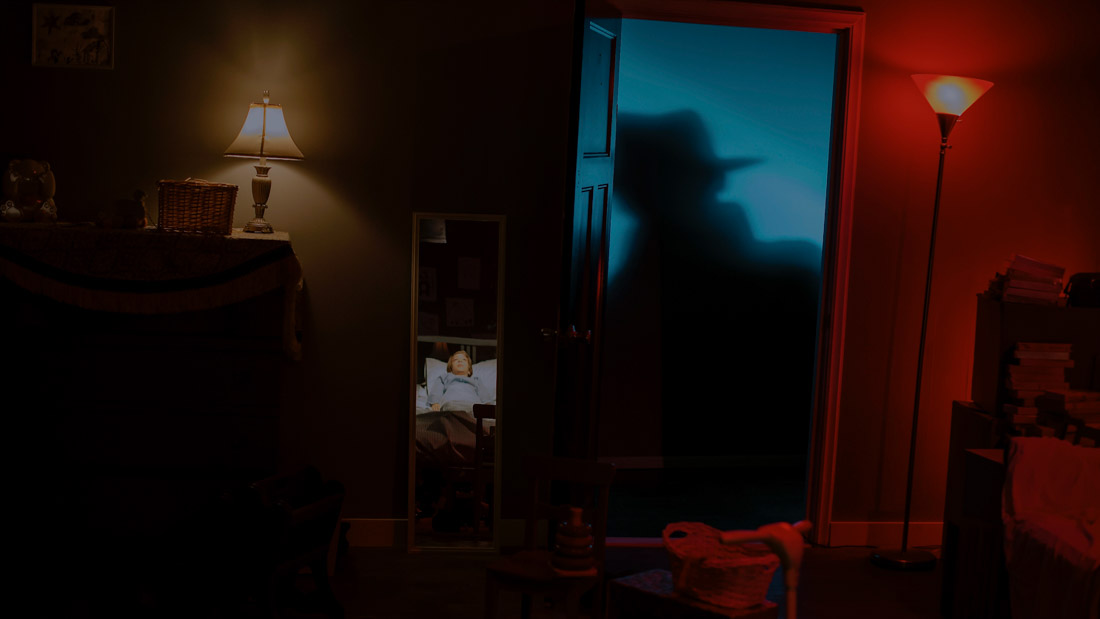 Perhaps the horror offerings this year were disappointing because nothing is scarier than our own imaginations. Rodney Ascher’s “The Nightmare” makes this argument convincingly. The director of “Room 237” presents eight people who suffer or have suffered from sleep paralysis, wherein they wake up in the middle of the night, unable to move or speak, and are beset upon by demonic visions. Are they visions? Or are they visits from the other side? Why are so many of them around the world so similar? Why do people who have never met each other, on other sides of the planet, see the same shadowy figures, including one with a hat that clearly inspired “A Nightmare on Elm Street” (and “Insidious”)? Is there more to it than the clear physical/mental issues at play? Is it a misfiring neuron or the devil?

As he did with “Room 237,” Ascher presents his subjects without much judgment or affirmation of their stories. He doesn’t get experts on sleep paralysis, and a few of his interview subjects seem so extreme that it’s hard to believe he takes every word of their stories as fact. He recreates many of the most disturbing nightmares, and there are a few “set pieces” in here that are truly terrifying (certainly more so than anything in the non-documentaries “Reversal” or “Hellions”). However, “The Nightmare” gets repetitively quickly. It might have made a more interesting “Dateline NBC” special but can’t quite justify a feature length. And you know how other people’s dreams are never quite as interesting as the storyteller thinks they are? “The Nightmare” suffers a bit from that effect too.

For the Sundance Horror record, no one on staff could get to “The Hallow” or “Turbo Kid,” but we did interview the stars and producers of the reasonably well-received “Knock Knock” from Eli Roth.