Roman Polanski's "Rosemary's Baby" is a brooding, macabre film, filled with the sense of unthinkable danger. Strangely enough it also has an eerie sense of humor almost until the end. It is a creepy film and a crawly film, and a film filled with things that go bump in the night. It is very good.

As everyone must have heard by now, the movie is based on Ira Levin's novel about modern-day witches and demons. But it is much more than just a suspense story; the brilliance of the film comes more from Polanski's direction, and from a series of genuinely inspired performances, than from the original story.

For this reason, the effectiveness of "Rosemary's Baby" is not at all diminished if you've read the book. How the story turns out, and who (or what) Rosemary's baby really is, hardly matters. The film doesn't depend on a shock ending for its impact.

Although I haven't read Levin's novel, I'm informed that he works in the conventional suspense mode. We meet Rosemary and her husband and the couple next door. We identify with Rosemary during her pregnancy, sharing her doubts and fears, But when the ending comes, I'm told, it is an altogether unexpected surprise.

Polanski doesn't work this way. He gives the audience a great deal of information early in the story, and by the time the movie's halfway over we're pretty sure what's going on in that apartment next door. When the conclusion comes, it works not because it is a surprise but because it is horrifyingly inevitable. Rosemary makes her dreadful discovery, and we are wrenched because we knew what was going to happen--and couldn't help her.

This is why the movie is so good. The characters and the story transcend the plot. In most horror films, and indeed in most suspense films of the Alfred Hitchcock tradition, the characters are at the mercy of the plot. In this one, they emerge as human beings actually doing these things.

A great deal of the credit for this achievement must go to Mia Farrow, as Rosemary, and Ruth Gordon, as Mrs. Castevet, the next-door neighbor. Here are two of the finest performances by actresses this year.

And the interesting thing is how well they work together: Miss Farrow, previously almost untried in the movies, and Miss Gordon, an experienced professional. Because we can believe them as women who live next door to each other, we find it possible to believe the fantastic demands that the Castevets are eventually able to make on Rosemary.

Polanski has also drawn a memorable performance from Sidney Blackmer, as the explicably sinister old smoothy, Roman Castevet. John Cassavetes is competent as Rosemary's husband but not as certain of his screen identity as he was in "The Dirty Dozen."

The best thing that can be said about the film, I think, is that it works. Polanski has taken a most difficult situation and made it believable, right up to the end. In this sense, he even outdoes Hitchcock. Both "Rosemary's Baby" and Hitchcock's classic "Suspicion" are about wives, deeply in love, who are gradually forced to suspect the most sinister and improbable things about their husbands.

But Cary Grant in "Suspicion" was only a bounder and perhaps a murderer, and we didn't even really believe that (since he was Cary Grant). Rosemary, on the other hand, is forced into the most bizarre suspicions about her husband, and we share them and believe them. Because Polanski exercises his craft so well, we follow him right up to the end and stand there, rocking that dreadful cradle. 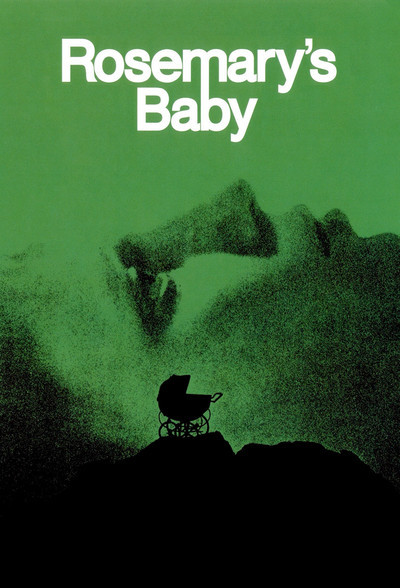