We Are What We Are

Upon hearing the premise for the new horror film "We Are What We Are," many people will no doubt assume that it will be some kind of grisly dark comedy combining jet-black humor with gruesome imagery designed to keep viewers from making any visits to the concession stand in the immediate future. Instead, it treats the concept in a quiet and deliberate manner throughout and while such an approach may prove disappointing to anyone hoping for a broadly drawn bloodbath, the serious and respectful tone helps to make for a genuinely creepy moviegoing experience that will attract both serious fans of the genre and those viewers simply looking for a well-told story. (A story, it should be noted, that is probably best experienced knowing as little about the details, such as the ones I am about to reveal, as possible.)

Set in a remote small town outside of the Catskill Mountains, the film centers on the Parkers, a fairly reclusive but otherwise normal-seeming family that, as the story opens, is marked by tragedy when the matriarch dies in a tragic accident brought on by a massive rainstorm. This is horrible enough but to make things worse, it is just about time for them to go through a religious ritual that has been performed in the family for a couple of centuries and which can only be done by the woman of the house. Oh yeah, the ritual in question involves cannibalism.

Reeling from his wife's death, domineering father Frank (Bill Sage) insists on pressing ahead and goes out the night of his wife's death to bring back a not-so-willing volunteer to manacle in the basement in preparation for the ceremony. On the other hand, teenage daughters Iris (Ambyr Childers) and Rose (Julia Garner) are not quite as enthused with the responsibilities that have suddenly been forced upon them. What the Parkers don't realize is that their ghastly secrets are in danger of being revealed by the police, a curious neighbor (Kelly McGillis) and a local doctor (Michael Parks) whose daughter was a Parker house entree. Even Mother Nature gets into the act, as the torrential rains begin to uncover skeletal evidence of unspeakable crimes.

If this plot sounds slightly familiar to you, it may be because "We Are What We Are" is a remake of a 2010 Mexican film that received a bit of acclaim among horror film fans. I never got a chance to see that film but from what I understand, co-writers Jim Mickle and Nick Damici (the former also directed) have taken the basic premise and then played around with it in a number of ways. The key change, so I hear, is that the genders of the key characters have been switched around—in the original, it was the father who died, the mother who encouraged her brood to carry on and a son who found himself forced to carry on the unspeakable tradition. I also hear that in that version, the keeping of the tradition was driven by socio-economic factors instead of misplaced religious fervor.

Although I am curious to see that version now, I must say that this remake is a more than satisfying moviegoing experience in its own right. Most filmmakers might have taken this basic premise in order to play it as grisly black comedy along the lines of "Motel Hell" ("It takes all sorts of critters to make Farmer Vincent's fritters") and it could well have worked that way. However, by taking the decidedly lurid material seriously, Mickle and Damici have attempted something far more challenging and the risk pays off. From a tonal standpoint, the whole thing is a high-wire act in the sense that if there is one dramatic misstep or bad laugh, the whole thing could collapse in an instant.

Aside from a couple of moments where things could have been tightened slightly, the film never stumbles and the result is one of the more remarkable horror films of late—one that does not rely on sudden shocks or outrageous gore to get under the skin of its viewers. This is not to say that the film can't pull off such moments—there is one scene in which a moment of rare tenderness is brutally interrupted in a genuinely shocking manner and the similarly out-of-nowhere Grand Guignol finale will raise eyebrows and gorges in equal measure. However, it creates an atmosphere of dampness and dread that is genuinely convincing and is far more unnerving in the end that any amount of fake blood.

Intelligently conceived, beautifully executed and filled with surprisingly convincing performances all around (Sage creates an aura of quiet menace that is impossible to shake and Childers and Garner are both heartbreaking as the daughters), "We Are What We Are" is that rare horror film that could play at both arthouse and grindhouse theaters without seemingly out of place at either one. Genre fans will eat it up—no pun intended—but it might prove to be a harder sell for viewers who aren't necessarily jazzed with the idea of watching murder and cannibalism that isn't set to the music of Stephen Sondheim. To those people, I assure you that in terms of smart and serious filmmaking, I would put this film up against any "serious" movie that has come out so far this year and I implore you to give it a chance. Just don't make any plans for dinner afterwards. 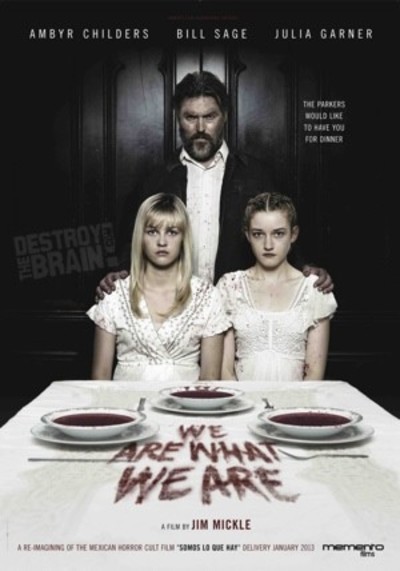